We have now published the first part of the answers for our Summer 2022 Q&A! Please read them here:

Welcome to our Q&A with Game Designers - Summar 2022 Edition! Below you can find the answers by our game designers Tim & Joel to the questions submitted by the community here on our forum (see all submitted questions here. SGG Staff Answering Questions: Tim - Head of Game Design Joel - Senior Game Designer Index & Schedule This AMA will be released in three parts, please see the schedule and content below. Please note that all questions were asked and answered in late June. We have organiz…

Thank you for doing this. It was much requested in the past and I think the community wants it even if we don’t always get the answers we want.

More comments on new buildings. It seems like this could be a game changer in how the game is played which increases its excitement. What does new type of heroes mean? Intriguing.

My question. Playing on 1X is painful in that game now and I only do it in timed modes to make sure I’m not wasting time thinking. Faster speed is a thing from games to podcasts/audiobooks. I enjoy playing the game, not waiting for everything to happen so I can go back to playing.

Another question that has been asked and answered. However I fear the admission that they once got it wrong will be all the proof some need.

I’m glad they go through this and answer questions even if I feel many answers won’t be enough.

“Are we going to see more Costumes from ToL or past HoTM?”

Joel: Many, many past HotMs definitely have a need for them so we’ll try to expand the Costume sets for them as soon as possible! A lot of players have their favorite HotMs, and it’d be really cool to be able to provide extra utility (and hopefully interesting looks) for them.

… and it’d be really cool to be able to provide extra utility without having to summon for it again.

Costumes are a farce.
Thanks for skirting the subject.

Are they really that mindful of screentime? Forcing us to play the new seasonal event in order is the most recent example of unnecessary screentime added to get premium rewards. The latter part of the response tells me that the question was answered on an individual feature level rather than an aggregate screentime per day.

Grinding and playing all features takes way too much time; even the game designer picks only a subset of features to play (from what I am reading).

I am happy to see that now at least there is a small chance for having some new 3-4 star heroes for season 5 (or 4 ???).
Last year it was clearly stated there are no plans on doing them.

First off, a big thank you to the SG team for doing this. As @Ruskin505 mentioned above, we may not always like the answers BUT I do appreciate the attempt to engage, and the time/effort needed to put this together.

On that note, we hope that Monster Island — the co-operative Alliance adventure — will provide something completely new every month once it’s running at full capacity.

I sure am curious how the calendar will look like, once THAT is added in… several events (Mythic Titan, Costume Chamber…) already do not run every month… please please please please do not bump Atlantis Rising to every 2 months…!!

This I very much agree with - at least, the new shortened POV contains enough slack re missing Dailies or last tiers of Valor challenges. I am able to open 3 extra valor chests despite missing the last tier of 6* Titan challenges, for example

I personally have no issues with how RNG works in this game… my issue is with the low odds. Would increasing the 1% chance of a Legendary in some portals to 1.5% or 2% really break the game?

This gives some insight, I would expect that things like balancing heroes and creating new costumes are also time and resource-specific. So… of course the most recent heroes are prioritized eh?

So is this a way of saying players weren’t as interested in Slayers / Villains / Starfall? I wonder if it has anything to do with:

a) too many events
b) Gargoyles heroes being arguably more powerful, and thus more attractive to summon, compared to Villains et. al. (after all, how many times did THOSE families get buffed??)

I’d be curious as to the exact metrics reviewed, to say that Gargoyles should continue separately. or is it because we’ve only had 1 Gargoyles run so far, while the others have had multiple… so if Gargoyles’ does not do so well after a couple of runs they could get lumped in with the rest…?

I love how they tackled the hard-hitting questions! I’ve been wondering about those bridges for ages. 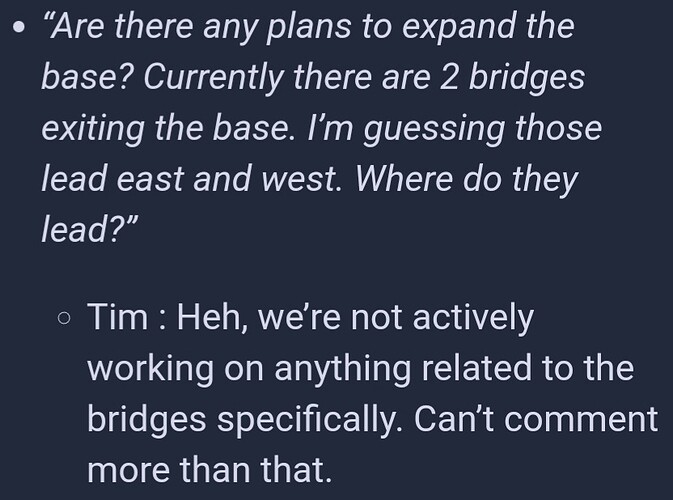 Ok, I’m acting in bad faith. They did go a bit more in depth than this.

A lot of talk but nothing is said. They are like a true politicians.

My take in short: Only priority is designing new overpower 5* heroes that they can sell to us (and then nerf!). I loved this game, but I have stop spending money since the C-Krampus racket and the money greed overall culture is starting to get to me and I just played less and less lately because I just feel like a money milking cow.

After reading the Q&A that was exactly my opinion! Just blablabla

Yes, I can agree. They have not told much more information besides what is already on 2022 Sneak Peak.

If they dont have time they should hire more people. But that would eat into their earnings so probably not a priority…

“A lot of players have their favorite HotMs,”

Yes.
And none of those players receive the…

Unless…
they spend to get "their favorite HotMs"
again and again.

Also also, was it just me?
Or…
Was the answer to this question:

"No, we’re trying to figure out how to add more time suck to the game"

Did I comprehend that wrong?

I don’t think so learned anything from reading this. Can I have my ten minutes back?

Reading all of those responses, and so much of “it’s not a priority right now” - brought one single question to my mind, and that is;

But I think we all know: Releasing new OP heroes, what everyone will pull for.

i see that my question about the possibility of Sand Empire being replaced by Kalevala got answered.

Did anyone else notice a clear avoidance of an important topic? Specifically:

I think we have some Giant Robot sympathizers working at SGG!!!

Reading all of those responses, and so much of “it’s not a priority right now” - brought one single question to my mind, and that is;

Not gonna lie, I’m a bit concerned about this:

So… what are these dragons that were mentioned last year?”

Especially the “bigger than any of the events we’ve ever done” and “new type of Heroes” parts.

While I’d welcome new, creative ideas, I don’t want E&P to become a completely different game. I chose it because I like its core gameplay the way it is.