Thanks Tim and Joel, for real, but honestly, don’t really bother next time if you’re gonna half as* the answers and not really answer any question that would have real weight or significance.

Summary of the entire Q&A:

‘We don’t have the time or resources to make any improvements to the game in the name of fun, QoL, or actual balance; we only care about things that bring in the money.’

The answers to the W3K questions in particular said this pretty blatantly. They bring in millions of dollars monthly. I’m positive they can afford to hire at least one person whose entire job is to work on QoL type things. For example a good programmer should be able to knock out a roster organization update that includes extensive filters and sort options in less than a month. Also adjusting loot for W3K should be a task that only takes a few minutes as you would only be changing numerical values in the code (for instance changing a 10% chance to a 20% chance or changing from 2 draws to 3 draws, etc), so that answer was very insulting imo.

But we know their favorite color… Isn’t that enough for YOU PEOPLE?!?

I think staggered releases of their answers didn’t help. I already lost hope after part 1 and 2, part 3 being a bit more friendly did not bring the hope back.

To sum up all parts, I don’t think they were any close to satisfying compared to the ones we had previous years. SG messed up a lot of things in the last ± 18 months. Buggy new releases, shady balance updates, questionable reworks. List is so long. Plus their priorities feel really hostile towards players. Basically all their recent actions prove they don’t want players to feel good and have a good time - they want players to ruin their finances by giving as much money as they can afford (or more!) to SG while most of the time still walk away unsatisfied so then they feel urge to spend more next month.

This Q&A was their chance to come clean. Admit to some of their mistakes, shed some light on their decision-making and give players hope something good (or at least the end of current madness) is on the horizon. Maybe tease one or two new features, like what they did with Hero Academy or Soul Exchange in the past. Show some human face, but not bulls***t like favourite color or hero, but a genuine interest in their million players’ mental health and entertainment taken from the game. There’s so many issues with what the game currently is, how the old and loyal players feel about it etc. What we see happening is not reassuring, so at least they could tell us something reassuring.

But nope, none of that happened. Reading this Q&A only confirmed what we already suspected - even if it didn’t do so directly.

Only two new things to look forward to - the Dragon Update and the PVM Alliance feature; but we learnt about those in the Sneak Peek already - and half year later in the Q&A they literally didn’t say anything new about them to keep the hype going! And frankly, with how the game looks like currently I can’t help but expect the following from these two new events:

So while it’s nice that they finally communicated, I don’t think I like the message. Those Q&As helped me fight the burnout and restored some faith in good will of the developers in the past; this one here only reassured me that all the fears about where this game is heading are true, and there’s no hope left that it will ever again be nice, fair, consistent and friendly as it used to be before 2020.

I totally i agree with the guy above but most disgusting about this game its rigged board and frustration that is creating on people’s health the game its not fun only frustration its in front mathematicaly calculated rigged board and why well because i stopped paying if someone paid 20$ and other not must win and for some reason they ressurecting 15 times 15 freaking times in a row with same lame low % chance they armor increasing for no reason their dmg increasing i not making dmg enough for some reason always kilss first most needed heroes i am not able to fill Very Fast heroes with mana troops while Alfrike with armor troops shots special skill
2-3 times every line is crossed everything is demanding needs tons of resources for some event and needs months those resources to be collected again and for what for couple of emblems? Everything can be more or less tolerated but rigged board cannot be tolerated paying players gain mana faster and not suppose to also extreme heroes that paying members gets and we cannot its disaster and Mr. Pengy removing always my whole team its even disaster when Telluria was to powerful previous developers listened Zynga its biggest disaster in games never listen only asking for money how new players can start playing and if they think this is the way to force us paying money this is my message you are not getting any money not now not anymore or ever and the message for the new players dont even bother leave now! 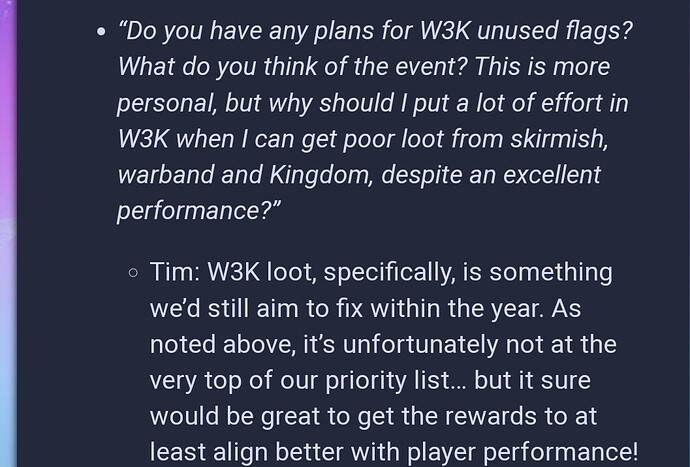 Screenshot_20220723-103935_Chrome1057×716 135 KB
So the total evasion of the question if there will ever be a penalty for unused flags in war of 3 kingdoms which the whole community pretty much all agrees on doesn’t warrant a answer??? However whomever was asking the questions did bury it in a big pile of other stuff. Maybe in the future ask one question at a time that way they dont get buried before they get an anwser? When asking several questions in one the problem is whomever your asking can pick the question they want to anwser and avoid the other’s . I know the majority of war of three kingdoms faithful players want to know what is being done about unused flags( this is a major issue ) and one that this question never got an anwser by the way this question was worded!!!
3 Likes
2puttshaqur July 23, 2022, 3:45pm #47

No offense to the interviewer… But this interview was some bullcrap. The person doesn’t want to answer the question… You keep drilling. We want answers… We want a timeline… We want an action plan… We don’t want an acknowledgement that people care about it and sg doesn’t.

No offense to the interviewer

There wasn’t one lol. They typed out the answers they wanted to give to the questions they handpicked and that is all we got. There was no back and forth/follow up questions, unfortunately.

Players got to post their questions in another thread.

Zynga/SGG cherrypicked the questions that they wanted to answer.

Those are the answers they gave.

This format was a repeat of the Spring 2021 QnA. That session was an eye opener too.

I’m aware… But there needs to be a Chris Wallace asking the questions and demanding answers… But just accepting the bs.

100%. Unfortunately, as long as they get people to spend money, they won’t care about the feedback or what the overall player base wants.

Another question for next time, but I haven’t figured out how to word it:
Background: Red was the least common hero in the top 10 defenses of a rush raid tournament with no blue

As game designers, why design a mechanic that isn’t utilized?
Do you consider this bad design?
What is the win rate by number of red heroes in defense?

Maybe I’ll just ask what part of the game is least balanced or most broken?

As someone suggested, it’s probably better to issue a more complex question to force out some reasonable answers from Zynga/SGG.

Given that top 10 player’s Raid tournament defence teams for 5* Rush/No Ice featured fewer than expected Fire tanks and flanks, which suggests that hero codex for Fire is generally lacking compared to the other elements, please explain why this imbalance exists when the constant refrain over the 5 years of this game from Zynga/SGG is “balance”.

I do like the question, but I don’t think my question really has any direct effect on the answer I’ll get. I’d rather make an open ended short question and hope they take it somewhere rather than a direct question.

The best way to get a clear answer on anything is to use blunt reporting-style questions rather than leave them open-ended.

If you are not fuss about their answers, then tone of question is not important.

Zynga/SGG cherry pick the questions that they want to answer anyway. They will probably skip the tougher questions.

Zynga/SGG cherry pick the questions that they want to answer anyway. They will probably skip the tougher questions.

I don’t think I’ll take the time to do this, but I (or someone else) should go through all of the submitted questions and put them in the next Q&A along with “why did you choose not to answer these questions last time”

Yeah that would be an Uber fun thing to do.

Like you, I wouldn’t have the time or inclination.

Best to live and let live.

They tried to ease roster expansion costs with that Roster offer. It’s not much but it’s something.

They held off on that ridiculous Hero Card preview, with that maxed, LB and emblemmed stats.

Another question for next time, but I haven’t figured out how to word it:
Background: Red was the least common hero in the top 10 defenses of a rush raid tournament with no blue

As game designers, why design a mechanic that isn’t utilized?
Do you consider this bad design?
What is the win rate by number of red heroes in defense?

Maybe I’ll just ask what part of the game is least balanced or most broken?

This is a good, interesting question. is it because some skills are noticeably lacking among Reds? Some skills are more common among certain colors than others - is it intended"?

I have scanned the points of many comments…. Especially the complaint & dissatisfied ones…

There is nothing crazy and burning….that would halt things at SG.

I m the player that enjoys the game…

&
SG, just provides the game, service. While they can improve things in areas many have spoken above….that doesn’t decide & control my mood.

Let’s complain about complainers with a nice condescending tone!