POV Challenges: Put them back please!

This POV has some nuanced daily challenges and I understand the need to make it more difficult than collecting 10,000 iron from a mine, but they are getting a bit silly! There’s a challenge today to win a raid with no legendary heroes in your team. I had 2660 cups this morning and had to deliberately lose 5 raids to get to a level where a 4* team can win. The developers did not think this one through. There must be lots of players on high trophies and in the dizzy heights of 5k defence teams. It seems like the only option is to lose continuously until a 4* team can feasibly win the raid.

Please think these daily challenges through.

This one is tricky but doable. As a f2p, I’ve using a bunch of 4* anyways. Mana controllers are key for fighting up. Worst case, can always mono and hope for the best.

I am raiding at the same level and had to spend some food until I found the right target.
Had an ok board and did it with the first try.

For the overwhelming majority of players, this PoV quest does NOT pose any problems, as they have no 5* teams to begin with! If you’ve neglected your 4*s, that’s on you. Even then there’s an easy solution: put up an unleveled cup drop raid defense team, log out for a few hours, and have your pick from revenge raids. By making others attack you, you don’t have to waste flags to drop to a feasible level.

The first team that I was offered when I started raiding today was ranked #98. I only rerolled 6 or 7 times to get a team that I could beat. Admittedly, my board got insanely good as the level went on, but I had taken out two defenders with my average board before getting to that point. So it is doable. (Mono yellow team against a team with two purples on it.) I ran 4 4* and a 3* against 5 5*.

As another has said, if you just put up a wimpy defense, within an hour or two, you will have dropped enough that you are facing 4* heroes.

It was okay. I liked it

As others have noted, it’s challenge, but doesn’t require anything drastic. I normally sit somewhere around 2500. I didn’t reroll at all and did it on the 2nd try – the first was an atrocious board; I was wiped in 4 moves.

Diamonds+20, Hansel+20, Kriril+13, Tettukh and Marcel. Setup on the right side and took them out one by one

ETA: it’s a unique daily in that it flips the normal “hard for low-level, easy for whales” rubric.

I was sitting at about 2600 cups myself, and managed this on the 4th try. I went mono Purple and got a great starting board. Admittedly, it took some luck and wasted a few flags, but I have a lot of raid flasks sitting around so that helped.

One effect of this is that I’ve decided to cup drop to an even greater degree than before, so I don’t know if SG finds encouraging cup-dropping a desirable outcome.

Honestly I thought the challenge was fun. I didn’t have to cup drop. And I didn’t have to reroll. I just looked in the stronghold for a “revenge” raid…. And won first time around.
This was my team …… 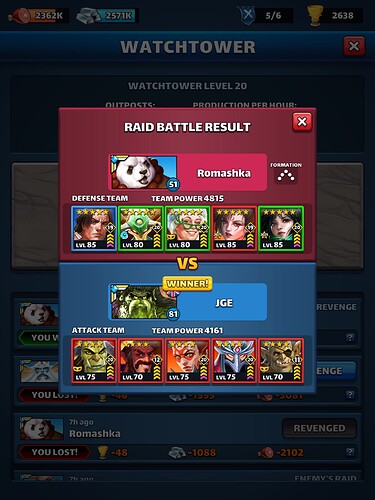 As indicated by my post, I completed the challenge on my 6th raid flag. I wasn’t asking for advice although the revenge raid idea is pretty smart.

I am not sure why you’re assuming my 4* are undeveloped, that’s not the point of this post.

Once in time I had the post of most complaining player ever in the forum. but nowdays I’ve lost it already. You guys just complain over some non sense things.

Losing trophies? so what?! they literaly DO NOTHING. You can also win using 4* heroes with an ok board too. Are the day quests stupid? yes. Is a riot needed? Nah.

When they are spamming OP heroes everywhere you don’t make not even half of this scandal and that breaks the game much more than one or two stupid pov quests. Dear Lord.

I just rerolled until I found a team of S1 5*s. Sergei and a bunch of purples didn’t struggle.

I won on my second attempt… But it was dumb because they are setting is up to fail.

My first thought was this was going to be a ■■■■■. I have 3 accounts, all typically stay over 2600 cups all the time. I looked through each watchtower to find a team that looked to be an easy targe - found one mono yellow team, another with Milcena tank and another with a Rigard tank (for each account). Won all 3 on first try. So it’s not too bad if you look a bit for a reasonable team and them use your emblembed/lb 4 stars. This is one time it would be nice to see a cup dropper in your tower.

The Ideas and Feature Requests category is for making suggestions and I’ve made a suggestion. There’s no need for the drama RebelForces.

Disagree with OP and I find PoV challenges to be fun and makes players break their daily routine, think and do their bit to complete the challenge.

Number of cups are irrelevant and keep changing all the time thru the day, week, months… so unable to understand the issue.

Wining a raid with no legendary heroes in a team was fun and in case OP writer and other missed out… this PoV challenge became even more fun, when many players changed their defences to easy / 4* hero defences, which allowed many players to win with their non-legendary teams.

SG should keep rolling out at least ONE weird / funny challenge everyday… to makes players think !

Come on… NOTHING is LOST…no player is spending for any resources to complete these PoV challenges… so I am amazed to see so much negativity.

Finally, I have videos on my Youtube channel about the fun I had doing these PoV challenges…