[Poll] Which defence is "toughest"

Could use defence advice. Came back last month after 8-month break. Got decent heroes but defence down, hit all fast heroes, etc elude me.

Since I can’t match the meta I gotta get creative.

All these combinations lack DMG I guess, but which could be best for non-VF war defence?

It could really help me out if you voted on which of these defences you’d rather NOT go against.

~Oh this is assuming emblems and maxed heroes~~ 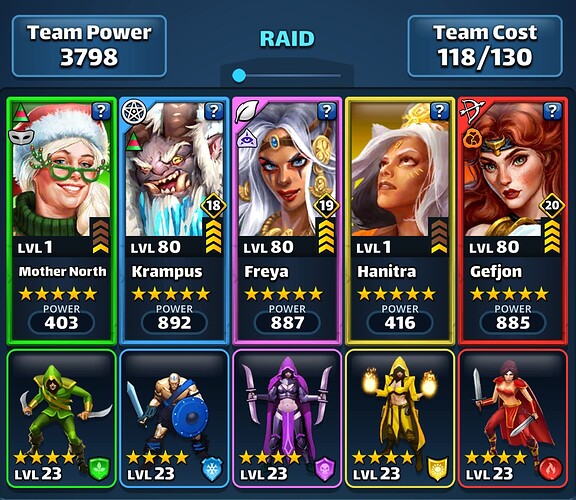 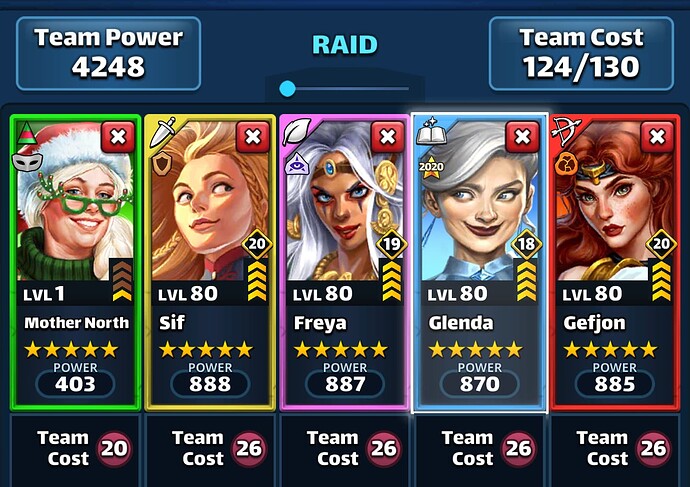 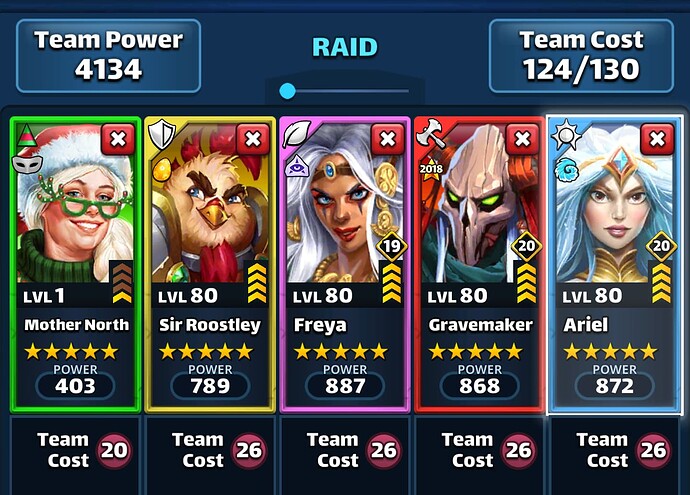 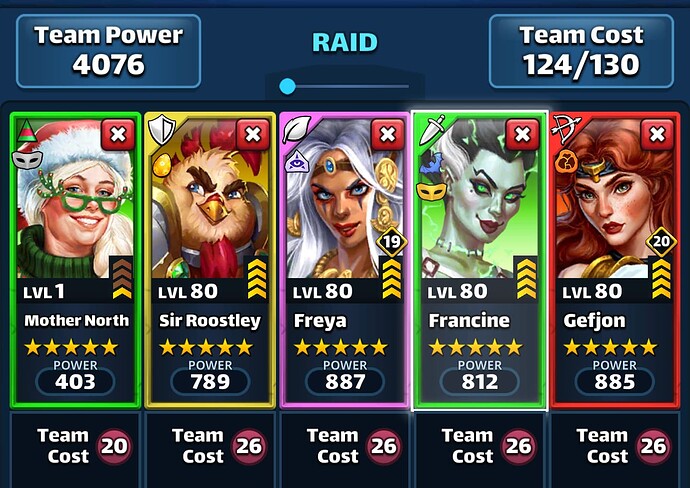 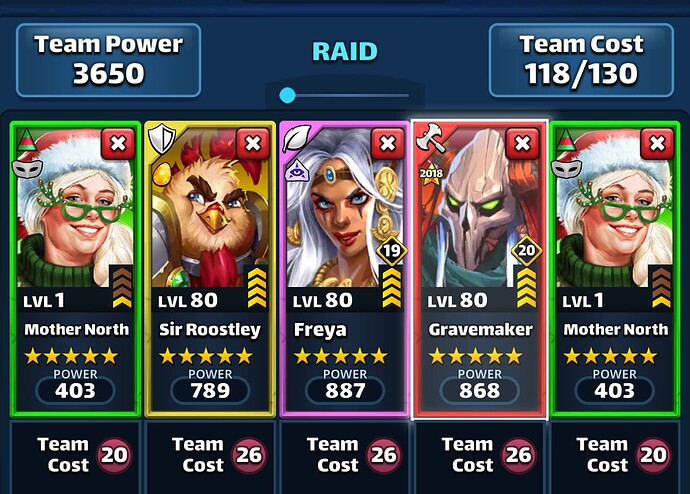 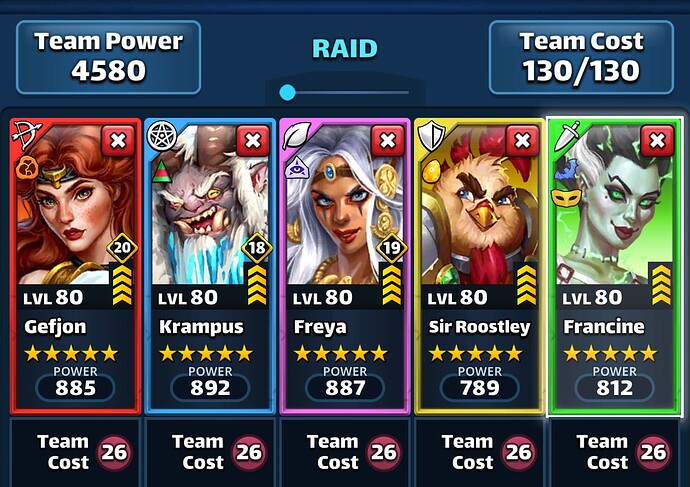 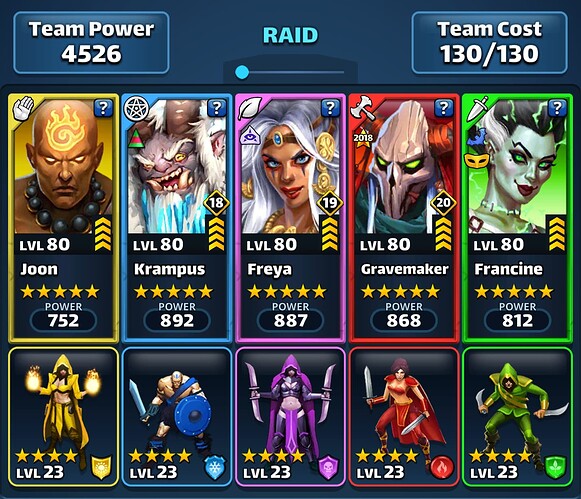 If you have any other ideas don’t hesitate to share them below as well.

A few other decent heroes are Ursena, Ariel, Tyr, Telluria.

I would take option #1 and replace Hanitra with Roostley.

@ZackRech Yeah I like that lineup but feels squishy. To be honest my defences with Krampus at Flank have performed worse than when I out Ariel on the wing…

@CarryAll I actually like that suggestion. Only problem is it pretty much means I’d have to strip Telluria. I love using her for my AFK map farm team with Freya

@mogulemon you think? I mean, Krampus is a so-so flank but the issue is DMG. Once Krampus goes off easy to just dump tiles into him instead of GM. Dunno about Roostley on the wing if it’s not VF. But thanks for your idea!

I would take option #1 and replace Hanitra with Roostley.

Me too. I also think best will be Mother North - Krampus - Freya - Sir Roostley - Gefjon.

I also like 3 but Ariel on the wing there is easy to isolate to stop her going off then finishing her off at the end. I’m not a fan in general of healers on defence teams in general. If you have a quick damage blue to go there or possibly switch to MN - Krampus - Freya - Roostley-GM

Ok, I’m starting to agree. I haven’t liked Roostley offensively, but there’s a value on defence for sure. If I had Morel left flank instead of Krampus it would be much better.

I was starting to think everyone was voting option #1 JUST so they could see the poll results, lol.

@Kilted thanks for the input. Yeah I agree about healers but exceptions are made for Ariel because she can resist mana block & her mana up can be so frustrating. If she goes off after MN revives. Ouch.

The only blue hitter that’s half decent on wing would be Fenrir. Don’t think I want to us 1500 fighter emblems on a Fenrir, tbh. Don’t think it’s better than Ariel on defence either.

I chose 6 because it is the most offensively oriented. I would switch Francine and Gejon though because when Krampus fires, Sir Roostley and Gejon can be a great one-two punch where Francine is more of a cleanse, support, damage dealer.

Yes emblemed up that would be pretty nasty. Even though Francine is fast and Krampus is average, I still most of the time she’d fire after Krampus anyways.

The only issue I see though is I’m not trying to craft a single attack “win or lose” defence… As I mentioned in the original post I kinda want “best for non-VF war defence?”

Although MN is slow, if you stick Costume with 55% revive chance in the corner, I’m fairly confident heroes can be revived and this defence could potentially absord more flags than a hard-hitting defence that kinda lacks sustainability because it has no heal or revive… If that makes sense.

Maps can be done without emblems.
Team 1 with roostley instead of hanitra is the best compromise between fire power snd survivability with your roster. With Krampus taunt, dodge is not so important, and roostley can annihilate a whole team with a single strike.
Happy gaming

3 seems the most menacing from my perspective. I’m in the 2700 cup range, and to go against MN and Ariel, a bad board can certainly get you in trouble once they start firing. IMO building defense is about ensuring you win when the attacker gets a bad board, because no defense can really hold up to a good board. The offense here is not too threatening, but enough to be a pain if they get revived, or fire continuously.

Yeah, but only other options are Ursena, C. Quintus, Kage or S1.

I’ll LB Freya soon, will help her beefy minions even more at the least.

Understand. I’m using Ursena myself at the moment. About to finish Ludwig, though, so at least for rush wars I’ll have a better option. Haven’t seen whether he’s worth it for normal defense.

As to healers/revivers, I tend to find that teams that don’t dish out damage are not all that hard to defeat – dump tiles until everything on your side charges, then annihilate one of the revivers. Repeat until you win. They are annoyingly long battles, but my win rate is quite good. I guess I should be thankful for the trend.