Poisoned luck or how to beat the odds for "worst luckiest" pulls :D

This is meant to be more of a fun thread, as there are enough critical and complaining ones

(and, from my point of view, often enough rightfully so)

Yesterday I did 15 pulls for the Covenant summons and… I GOT FRIDA!!! YEEEY, if only I would not already have her and maxing her right now

Not one, but TWO 5* in each of these 10-pulls. Too bad that the first two were Obakan and Elena and the other two were Sartana and Horghall

(Needless to say, I already have all four of them and except for Obakan who is maxed because I have the costume, the others will remain at 1.1)

Meanwhile, no Grace, even though she would be the next one ascended after Toxicandra if I would get her… Per total, in almost two years and numerous pulls, I have only two 5* from Atlantis: C Poseidon (maxed, hurray for him) and Missandra (sorry, girl). And of course I also got a copy of Mr. Poseidon

and once I pulled Clarissa.

At least in the second 10-pull I got C. Wilbur and C. Ameonna as well. And more fodder for SE.

I once had three consecutive 3*s from grey (normal) summon tokens. I mean, on one hand, that’s truly exceptional luck! On the other hand … it’s three more Valens.

In one week I got four 4 star mats from chests and MV, and opened ,y war chest and got a Epic AND Legendary tome of experience. Seems after that week I went to the bathroom and the horseshoe fell out.

2 pull i row, Agrafena and Nadezhda.

I had a stunning cascade set off a 29 move combo. It was like watching the grand finale on the 4rth of July. My screen reeled like an old-school Batman comic: POW boom THWACK bang

My eyeballs bounced around in my skull like a pinball caught in the bumpers.

Neurons were firing like fighter jets, down pathways in my cerebral cortex that were overgrown with weeds from lack of travel,
and dumped truck loads of dopamine which caused my medulla oblongata to short circuit.
That sent a spasm down my arm which caused me to fumble my phone in the air like a wide-receiver in the end zone on Super Bowl Sunday.
No… it didn’t fall in the toilet.
I caught it!
and while prepping my celebration dance,
I noticed that…

Can we get any comments from lifetime FTP players here?

Oh yes “worst luckiest” pulls is one of my traits for sure! In the recent portal, I’ve pulled 2 King Arthurs, 2 Evelyns and an Isrod (all dupes). In the previous Challenge Festival, on my alt account I pulled 3 Rhys in a row followed by 3 Emilio. The one before that, I pulled 3 G. Panther and no other featured heroes. Also had pulled 3 El Naddaha in S5 before pulling any other heroes from that portal. Back when Villain summons was around, I pulled 4 Tarkov in a row. You get the jist

I once pulled 2 hotm in a month ( usually I get 0 ). Unfortunately it was 2 Reubens!

During CF1 back in April, I made 180 pulls during that weekend… Outcome? 3 copies of c.Finley and nothing else

This really hurts and pretty much emptied all my challenge coin and gem balance that I had been building for a while. Almost pushed me to quit the game to be honest.

Trying for Morlovia costumes, with coins and gems, ended up with 2 C Victor in a row. Gave up trying after that. I got the message.

Trying in CF1, ended up with 2 C Rumpel in a 10x plus HOTM. Levelled one. Fed the other to SE. 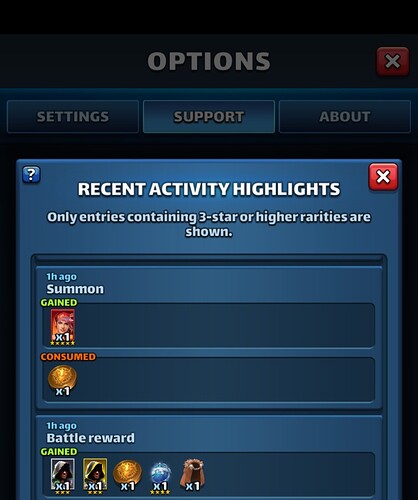 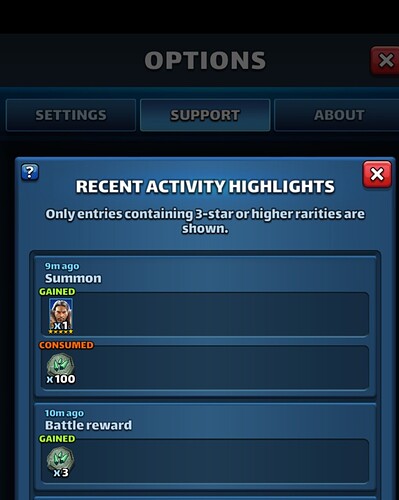 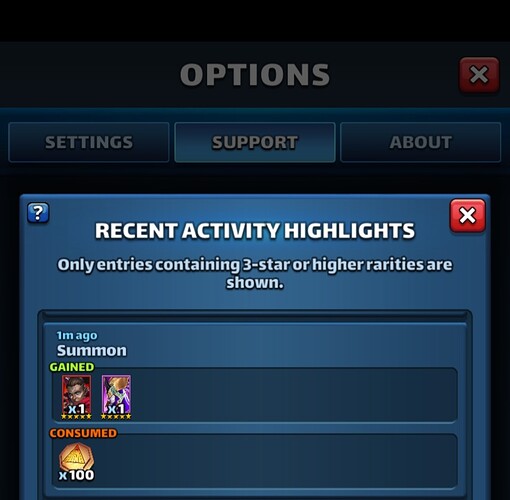 I’m C2P and spend typically between 20 and 50€ per month; since this month nothing because of the anti-gambling law in Belgium. Now I’m F2P.

During first time Slayer event, managed to pull Rian and Saoirse in the last few seconds of the portal with earned challenge coins. Considered myself very lucky. Still use Saoirse a lot (at 4/80 +20) but Rian is benched at 4/80 due to underwhelming performance.

In April 2021, managed to pull Rayne, Eloise and Quintin from coins… Again in the last few seconds of the portal. Got them all maxed, LB+20. Last CoK, hoping for Ludwig, managed to pull another Eloise. Might max her as there are so many minion makers these days.

First time s5 opened, did a first pull, got mummy-guy Papyros. Currently sits at 3/70.
And some weeks ago, on single pulls from coins during s5, got Khufu and Khonshu back-to-back. Both now maxed at +20; Khonshu LB but Khufu waiting for red Omega quest.

I find mocking heroes because of their looks and name could get you that hero, but you have to genuinely mock them and it will not work if you do it all the time. That was how I got my sun quan and khepri. Sun quan looked goofy AF and khepri sounds like Capri sun. Then as if it’s karma, I got them both in coin pulls.
Even for my newest guy Hawthorn, I joked that he dressed like one of those quest girl clerks in a game literally called ‘monster hunter’ and here he is in my account.
I swear this game is freaking self aware.

Can I borrow some foil from your hat for my microwave