If you think shes OP and needs nerfed you better start threads for every other hero currently in beta. Panther will be the least of your worries in another month or so.

Can we buff hanitra… Maybe 45% dodge… But 90% dodge versus dark heroes while on offense… 55% on defense. That would resolve the issue.

I agree. Got lucky and C Panther dropped within saved coins I had. Had her ascended from the Guin days. So, took a chance and did LB and mats on costume. No doubt good on offense but defense, not really. If she does get nerfed, then there is zeeo doubt E&P plans to make this a habit. Debatable that they already have. They just waste Beta testers time. Its a front to give you confidence that they have done their due diligence before release.

I have played the game since 1 month after release. Nerf was rare but as many say, why not just buff old heros? I think we know the reason why that is. If a hero on your bench gets a buff and becomes usable, less desire to pull for more. Even more so knowing a good chance they will nerf your new shiny hero. A hero you spent weeks and sometimes months collecting the mats needed. Let alone cost to pull.

Nerfs suck but ultimately only control we have is how we spend. They dont care what the player opinion is until it effects the bottom line. Unfortunately, it takes a massive coordinated effort, to scratch the surface at this time.

So, I will keep playing since I do have options in the roster to use. Just refuse to spend the 1st time a hero is released. Until they can prove to me they will not change a product after I have paid for it. Thats when you get the feeling of being stole from right in front of your face and not a dam thing you can do.

Yes please, Hanitra needs a buff. She is terrible.

Panthers not scary on defence, she was looked at closley. They wont nerf her.

Clearly you’ve never been hit by Sobek who also had his passives and family bonus trigger, or fought a Hulda tank, or an Xnolphod tank with double costume Alasies.

I played a friendly versus a lb nd emblemed gp… Her first hit was around 550 on average. Her second hit was around 850 on average… If she’s a tank… She’ll die easily… But if she fires twice with that el def down… She’s going to single handedly win a ton of war battles.

I have done 0 gem pulls this challenge festival.

Nobody was doubting that - at least not openly.

It’s this part which arose some suspicions.

all on free summons.

For instance, those are not free. Notice the price tag attached to them. 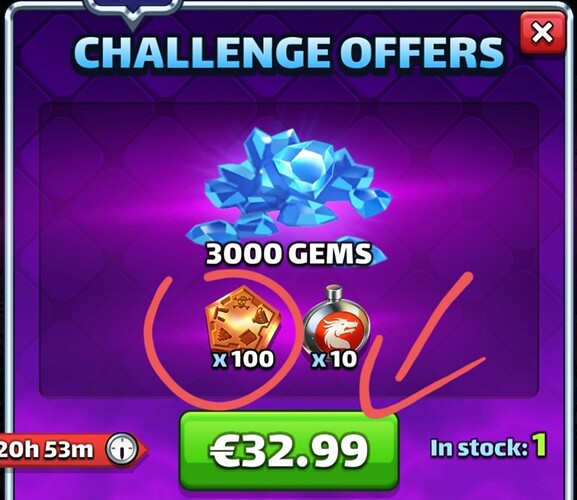 Anyways, if you indeed pulled all those great heroes for free, congratulations to you.

I’ve actually had all three happen to me and I’ve won in every instance. What does this have to do with my comment about you spending for a hero many have voiced as too powerful and called for adjustment for? Just because you spent money and got a hero doesn’t mean it shouldn’t be nerfed. You yourself have asked for nerfs against heroes you’ve deemed too powerful, yes? What about all the people who spent and got those heroes? Should they be saying the same thing to protect their own personal interests?

Did some pulls, got a lot of lame 3*. If I could have gotten one of those legendaries I would have preferred costumed Rumplestiltskin. He was crushing as a boss in the challenges when he perm. removed health.

Lol got one shot every time when I put panther costume on war defense. He doesn’t need a nerf.

She, like every other hero in the game besides gorseck, takes synergy to work. Show me your war defense and I can probably tell you why that happened. 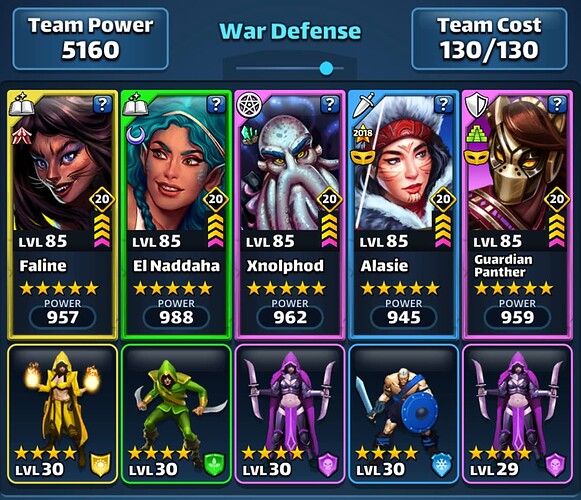 C Guardian Panther is not a defensive hero, and she has no real passives or family bonus to speak of (unlike S5 heroes) which is why she’s fine. C Alasie and S5 heroes on the other hand… hahaha.

Exactly. She won’t post a threat in any defense.

No point nerfing her.

lol she defo needs a nerf, a fast speed with 280% damage to all without any drawbacks, actually that damage alone is devastating at fast speed plus the immunity to buff that she gives is a problem too, quintus is crying at the corner haha

G Panther became the stongest hero in the game. If people have 2 Panthers that combo can wipe out the hole defence. She should be nerfed for sure!!!

even our feedback in beta that she is too strong, if you will compare her to custume master lepus, they have both 280% damage to all…but lepus has drawback just to balance him, plus she deals additional ailments…