I’ll add my 20 characters just for 5* because I’ve only recently started working on my 3* and 4* (after being an active player for 3 and a half years, IknowIknow).
I always go rainbow or 3-2. If it’s rainbow:
Kunchen, Gaillard, Elizabeth, Guan Yu and Inari.

I’m just thinking about 5* actually so no specialist for 4* and 3*.

I’d say my most effective/successful teams are those who can
A) either dodge OR taunt to withstand heavy attacks.
B) heal + cleanse / prevent ailments OR summon stupid amounts of minions
C) have def down / elemental def down + heavy damage dealer
D) have advantage out of stacking family bonuses

I always use 3:2
Regarding B) actually I try to go for two healers in different colours
Regarding C) I prefer hit all or hit three over sniper
Regarding all, using Alfrike makes up an exception for me since that is I different strategy.

Whatever combination enables me to win against the opposition at the time.

Team for what? Raids? Attk? Def? Some specific event? Titans? Specific war rules? There’s no perfect allrounder team. My raid attack team will win the vaste majority of offensive raids, but would fail miserably on defense or against titans. Know what I mean? You need to be speciffic.

And I was. I said “perfect team”. Your choice if you want to point out your perfect team for all of those.
Also, I created a topic about war rules and strategies and which would fit best, but you’re right, maybe I should’ve been more specific

I couldn’t find a similar topic, so if it exists, sorry. I’m curious what would be the best strategy for each war support and which heroes would be considered the best tanks for each of those war supports? The last Very Fast wars my alliance went with Liu Xiu and Boldtusk as tanks, but I’d like to hear more strategy suggestions.

My perfect rainbow team is

This made me perk up because I have three of those. C.Ariel, Evy and Conga. Fingers crossed for Clash of Knights event, my first 5* team may look very similar. For now I’d have to throw in Motega and Zagrog for lack of better options.

If I was to pick my best rainbow team I’d go with this. It’s not necessarily a team I’d ever use but in terms of the best in each colour I reckon this is it for me 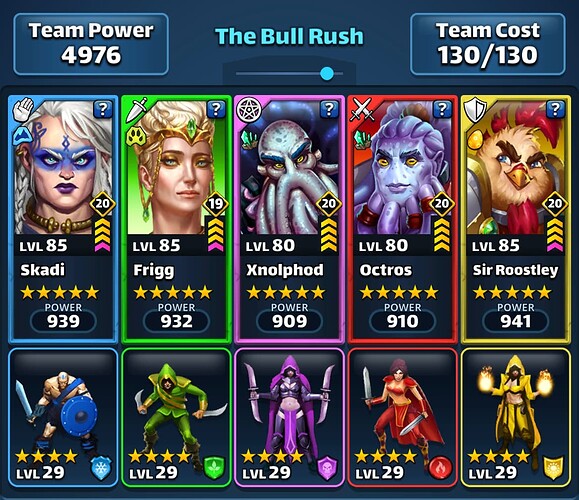 Probably my favorite team to attack with 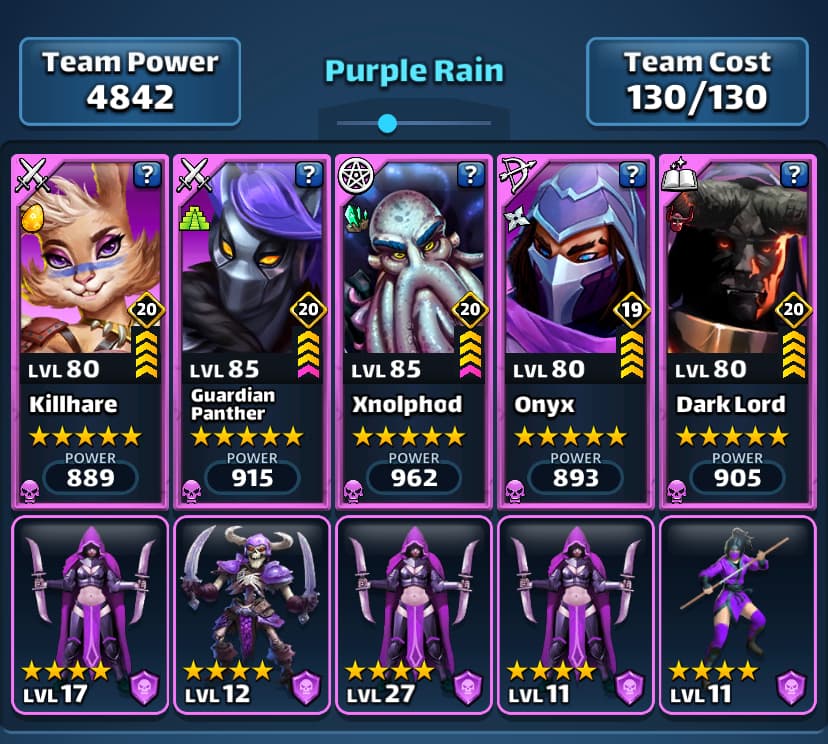 Ok it isn’t a perfect team but it is my primary team and it is so boring… it has won the last 12 of 13 raids, and consistently wins 90%+ of my raids/revenge. It really is boring and has me thinking of using a team of 3/70 heroes or maybe a Norns-Rumpel-Zhuge-Alexandrine-Guinevere setup of some sort…something to break up the monotony…maybe even use 4* raid teams

It even handles proper slug fests with teams like this… 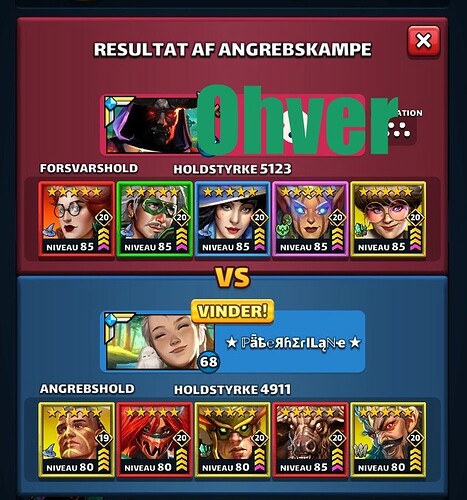 It didn’t matter though, it is a mean team to send against other teams and was victorious.

It isn’t perfect though, taunt and dodge heavy teams can brutalize it, so I usually swap out the Fire heroes for Hatter and another Nature hero, or run Xylophone and C.Sabina along with the Holy.

Before Motega’s recent buff it consisted of Motega-Zekena-Wolfgang-Ruby-Asterius and was just as succesful.

Am I a bad person if I puff enviously seeing your heroes, especially Ruby

, looks tough, even without a healer

even without a healer

Puff all you want

Motega is a healer though … lol, I abuse his 1st charge and he heals half the time and overloads on meat shields…you know because those Magic heroes were so weak and all, so he got his buff…

Off topic but it is sad that they buffed the

out of them. I loved Motega from the get go once I realized the inportance of his minions ability, he did not need two additional buffs on top of his base form.

I forgot about that stupid passive

Mainly because I did not get any

, despite doing quite a few pulls 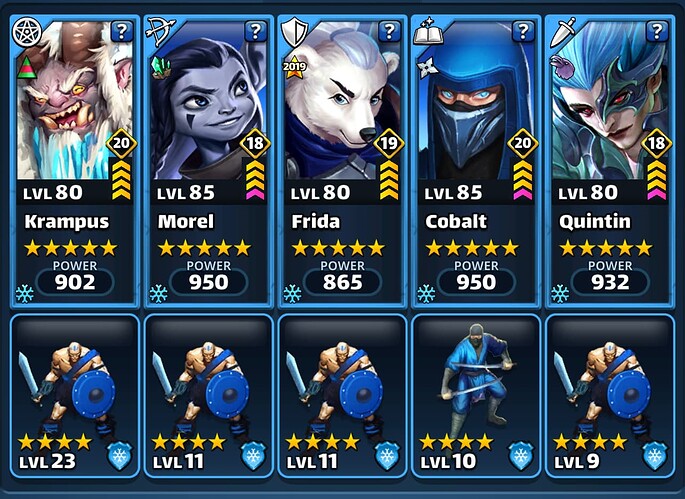 I have been using rainbow for the majority of my time in the game. Been using this team and having a lot of fun against any team in raids.