One solution to power creep

I’m not sure this is a solution as much as it just helps season 1 heroes.
I have costume Joon limit broken with emblems and he has 945 power. Eset, the newest hero would have 999 power. The additional emblem nodes would close that power gap, but passives, family bonuses, and special skills still leave a huge gap.

I actually find the focus on stats to be part of the problem as it tricks us into thinking same stats mean heroes are equally useful. 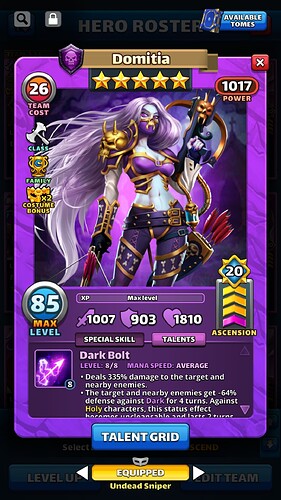 Problem is not power (currently S1 with 2 costumes have the highest power of the game), but passives and special skills. It would be better if one costume adds a passive and the second costume truly changes the SS.

This would not encourage people to spend money to keep up with power creep. It will never happen.

I’d argue that some of the Superior Talents make S1s viable/usable (even strong in some cases!) in today’s meta. Superior Revive, Dodge and Manashield can all be devastating.

Superior Revive, Dodge and Manashield can all be devastating.

Viv’s second costume is a real pain in the ash. Gotta kill her last.