@DaveCozy For Def vs Health, it’s totally a question of which boosts survivability better. And for Gormek, it’s Def all the way down. You can get a 22% survivability boost that way.

Since the Barbarian tree makes you choose Def+Att or Def+HP, though, they’re really not in competition. It’s Attack and Health that are competing.

The real question is, what do you plan to use him most for? His tile damage is abysmal, and you can add a significant percentage with +Attack. The +Health will give a smaller increase in survivability.

If you want him for Raids mainly, probably +Health (but I can see a case for +Attack); for Titans and PvE, +Attack.

I don’t have him maxed and likely won’t for a while since I got Wilbur recently, but I was just looking at his max stats. I’m thinking HP is going to get some love since it’s already pretty high, but attack and defense are pretty on par with each other.

I am thinking of defense + HP to boost his survival, instead of attack. Thanks for the info! (back on topic now

what route would be best with Gormek?

Pointing a lot of people to this thread lately, but it has a lot of discussion on emblem paths for Gormek and Grimm. I found it very helpful.

Hi All, I am C2P (mostly VIP) with most TC20 4* and some TC20 5*. I’m trying to decide whether to give Gormek or Grimm my barbarian emblems (I do not have any 5* barbarian). Using Kamikaze Assassins awesome tool, I looked at different ways to assign emblems to either Gormek or Grimm. As I see it, there are 4 different options: [beefy%20gormek] Option 1: Beefy Gormek. Focused on Gormek’s health and defense. Beefy Gormak is a giant glob of meat. His stats are even more lopsided than ba…

my Pirate teams… I’m on the fence about: Rare and Epic: 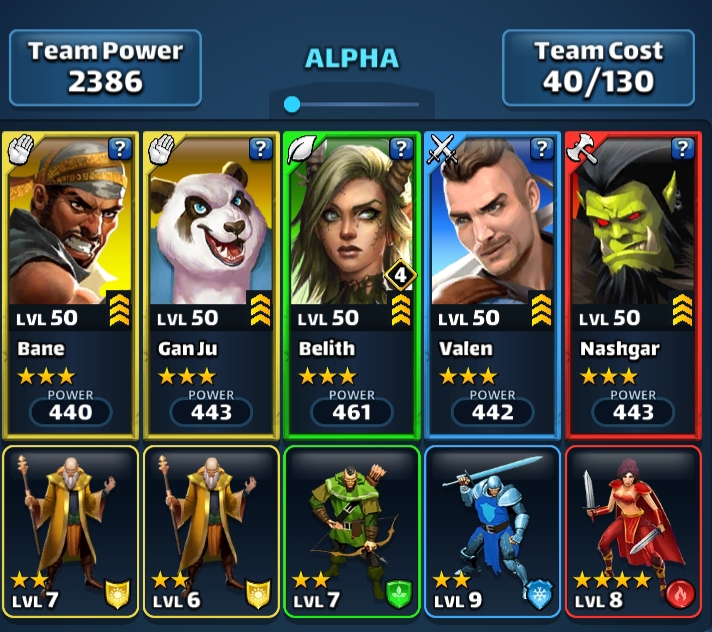 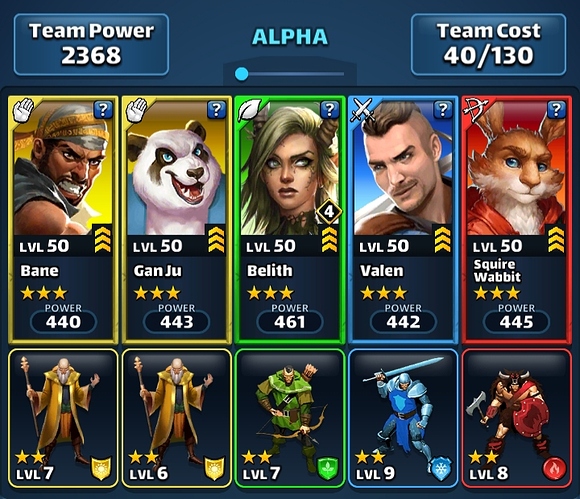 I focused on finishing Wabbit after reading up about him, here on the forum. Wabbit or Nashy? So close. Who would you use?

These will probably be my general workhorses until I complete each tier, then I’ll go back and tweak them for each specific stage to maximize my scores. 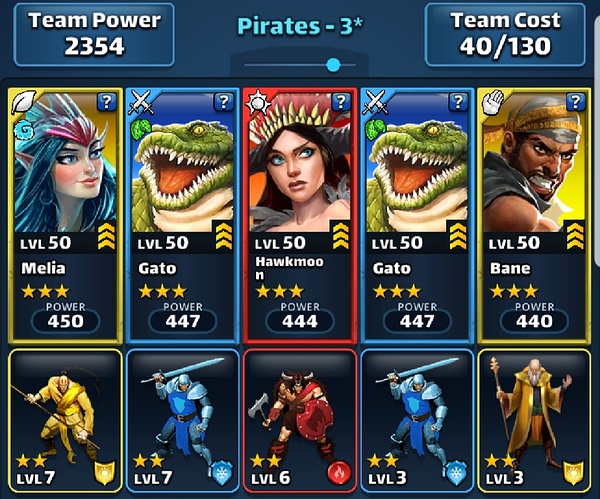 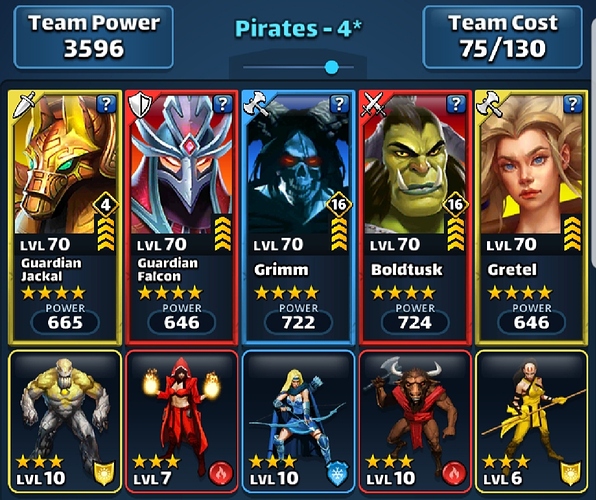 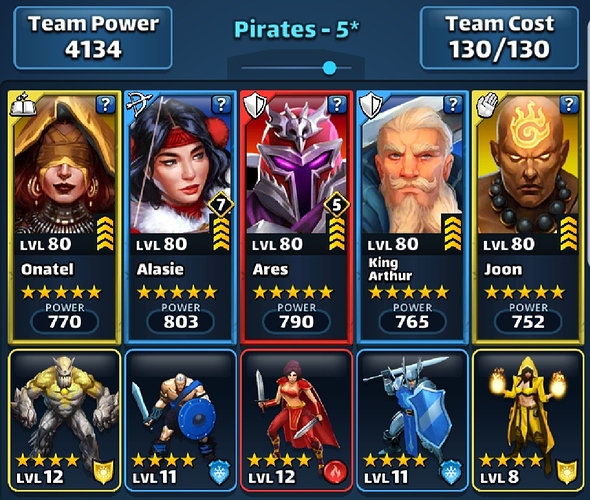 I am humbled in your teams presence! Wow!

Thank ya, I’ve been at it for a while now.

As for your Nashgar vs Squire Wabbit question, I’d personally go with that wascally Wabbit. They’re both kind of glass cannons, but Wabbit will really bring the pain, and at least you’ll have the option to use items to keep him alive! 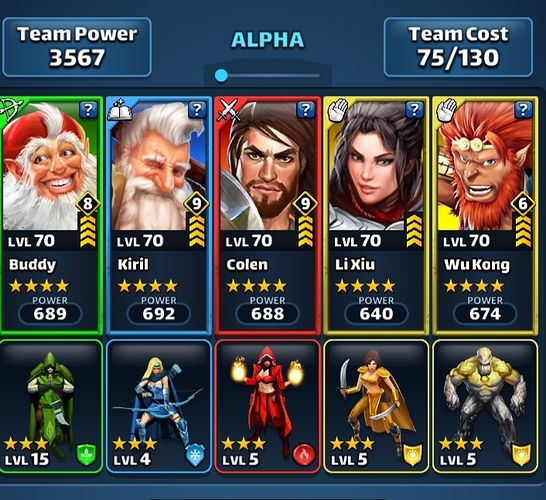 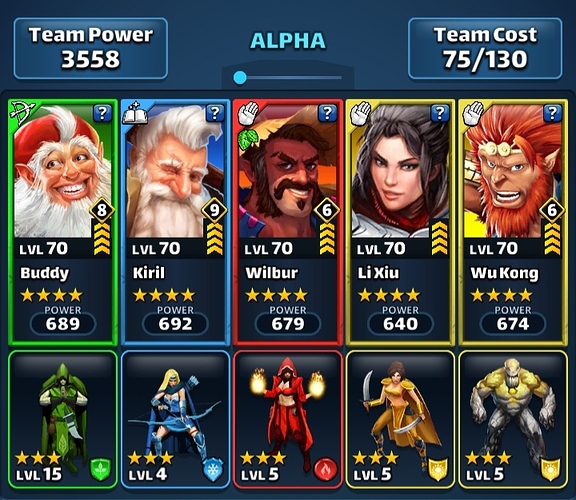 I focused on finishing Wabbit after reading up about him, here on the forum. Wabbit or Nashy? So close. Who would you use?

For the only red on a team, and presuming your goal is just completion, I’d lean toward Nashgar — he’s the safer choice.

The argument for Squire Wabbit is that he hits hard and has a high attack — the latter being more useful in a red stack.

And I think you have a good survival/offensive team mix now, with a defense debuffer, mana reducer, blinder, and healer. So there’s not necessarily another hero I’d be inclined to drop off the team to stack a second red.

If you were going for a competitive score, Wabbit would be highly beneficial in a red stack, since you’d be after a board where you could move quickly and with little damage to your team. But for just making it through, Nashgar is a better choice, since he’s a tiny bit sturdier, while still hitting reasonably hard.

I’d go with Wilbur. He’ll help with both survival and killing.

Do we know what completion rewards are or does it change each time?

Please take note of this announcement, Pirates will be skipped for June:

If you are a long-time player of Empires & Puzzles, you might already know that Pirates of Corellia was our very first Challenge Event . We have listened to your feedback that these early events could use some updating. As noted in our latest Ask Us Anything session , the plan is to refresh all current Challenge Events well before the end of the year.

While we are still working on the refreshed Pirates event, we have decided to remove the old one from the rotation. This means that June’s Challenge Event will be Riddles of Wonderland , which starts on Thursday, 13 June, at 09:00 UTC .

We also wanted to share a small sneak peek of the refreshed Pirates of Corellia event: 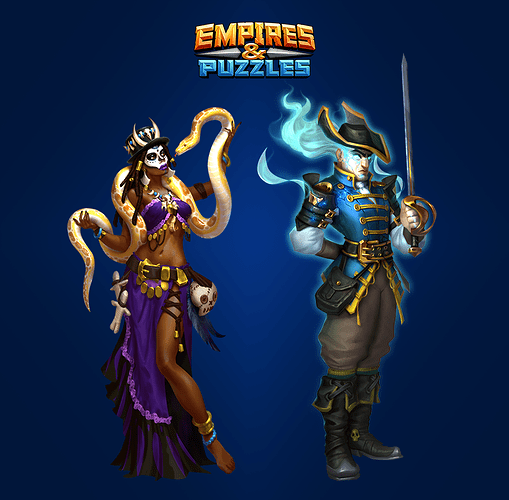 New heroes for Pirates of Corellia (Marguerite & Finley). Please note that details shown in the screenshot are subject to change.

June’s Challenge Event will be Riddles of Wonderland , which starts on Thursday, 13 June, at 09:00 UTC .

BRB, need to finish Gato 2 for the high score

No Pirates this month? I was hoping to summon the skinny pirate lady

Sorry buddy, pirate is said to be under reviews, we will be threading the Wonderlands instead, well it’s another opportunity at Wonderlands heroes.

Who ya got on board to take these waterlogged bloodsuckers down this month?!?

Depends on the colors, but I’m likely gonna get good use out of that blue team I posted a while back for Rare tier

along with emblemed Melia, emblemed Arman, and 3 Banes (I’d use a 4th Bane over Arman if I had him though)

I love my double Gato. I need to train up my second Bane (can’t believe I finished a Dawa instead.

Not sure I can handle Epic my only holy 4 star is unanimously the worst: Hu Tao.
I’m ok for red with Colen and Kelile but still not sure that’ll cut it.

I had only been playing a few weeks last Morlovia, so I didn’t make much of an impression. This year, I look forward to introducing those vampires to Poseidon and Onatel!

I have had some good luck with Hu Tao. Granted it’s mostly in Raids but he has been useful in events to, making the enemies miss me one after the other, which could have killed me (especially the bosses).

I am not sure who I will use. I have Azar, Bachaun and Nashgar all maxed for red but I have no Hawkmon maxed (I do have her but I am concentrating on my 4* - Proteus then Kiril, now Sonya).