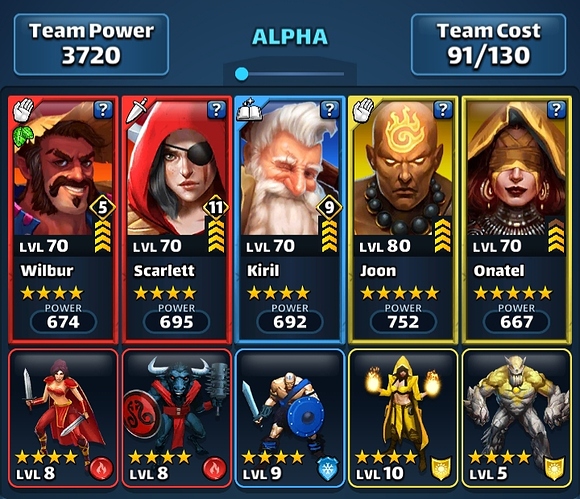 Whadya got and why?

For Rare, I’ll probably change from stage to stage a little, but be hovering around something like: 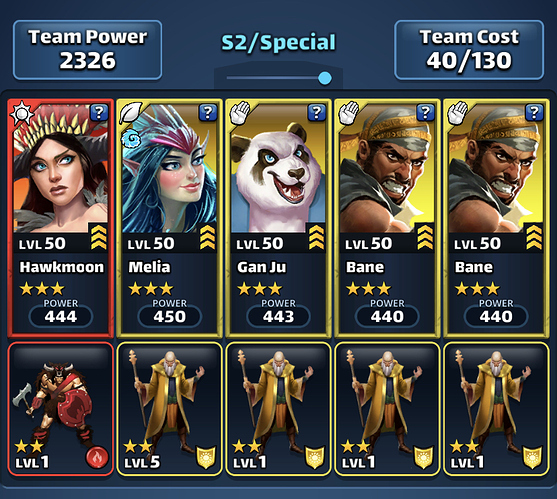 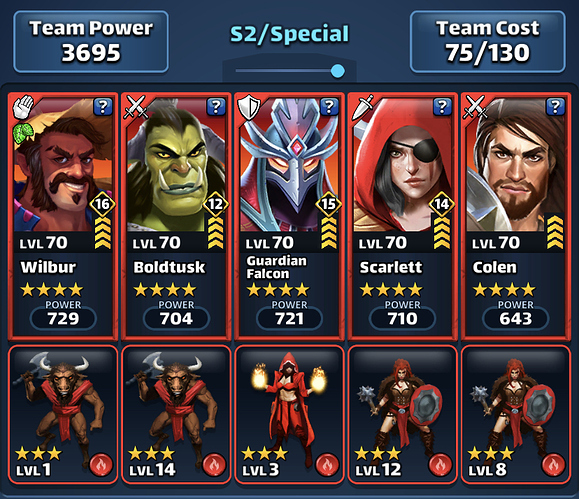 For the last stages of Legendary, I might swap in Li Xiu and/or Leonidas for some mana control, since Proteus is less fruitful than usual, and maybe consider Vivica for more healing if needed. 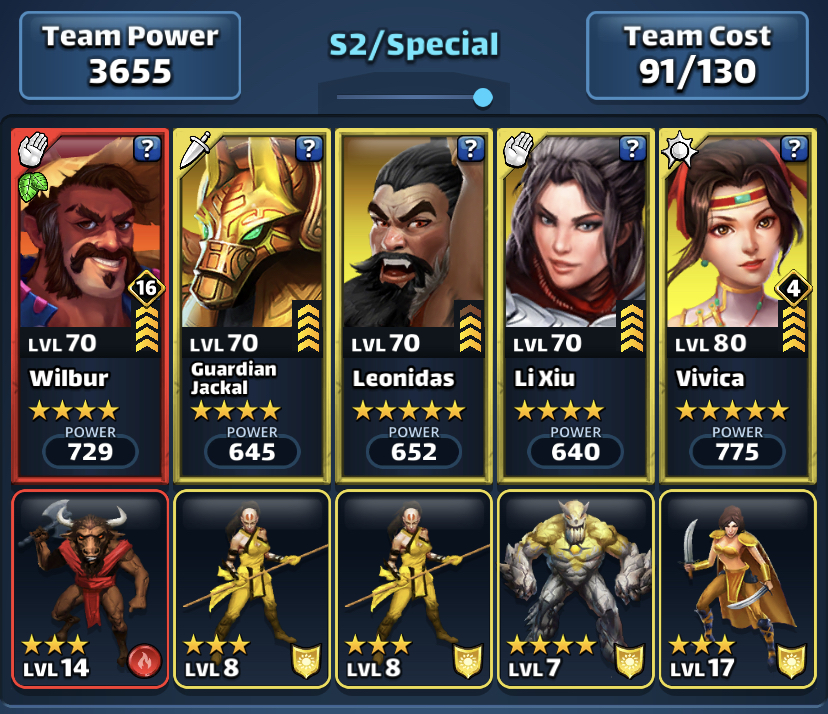 As always Zeph, you give me plenty to think about!

Forgot this was a Challenge, not seasonal. (SAND PIRATES!!!) 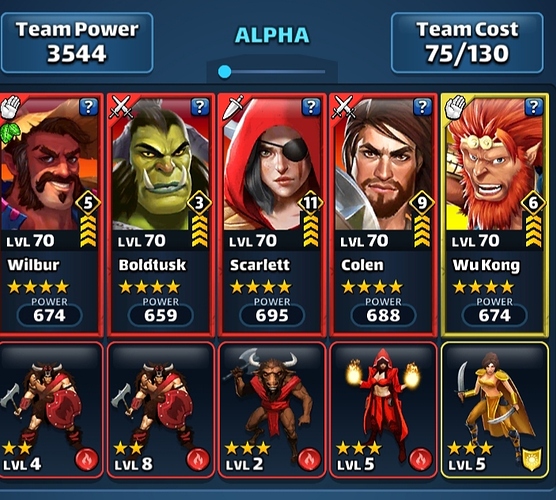 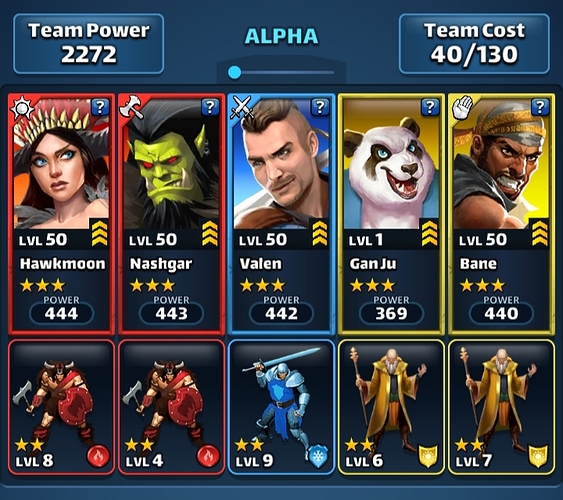 Uhg, why Oh why did I train up a Dawa and not a second BAAAAAANE?!!

lol I made a Dawa, but realized wasn’t the best idea and leveled up a second Bane

But She isn’t that bad, she has good ATK amount

Just going for casual completion myself for the goodies. 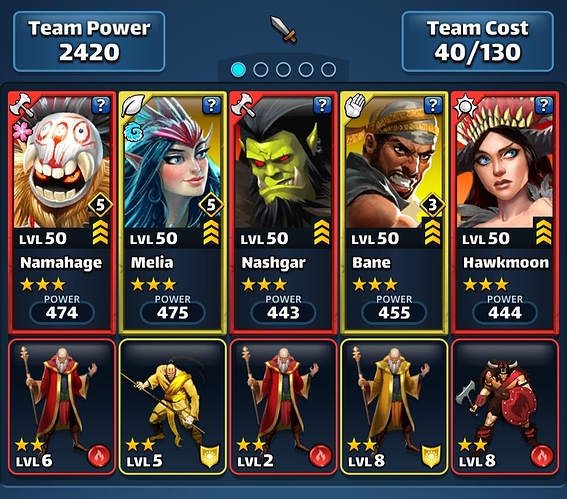 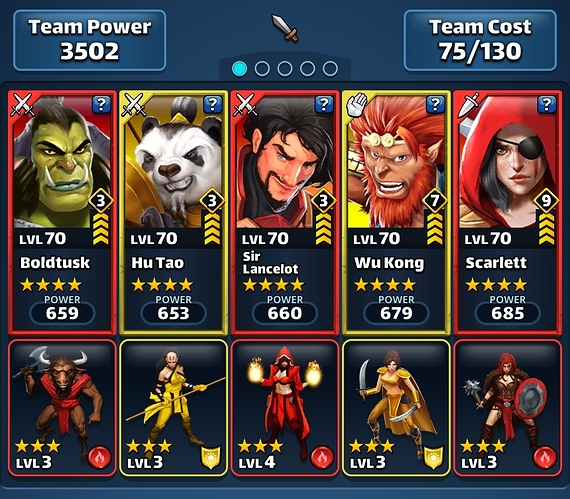 Gretel is at 4/58 for me, she’s replacing Hu Tao if she gets maxed before Corelia.

Legendary is likely gonna be the same as my epic team but with Red Hood over Hu Tao: 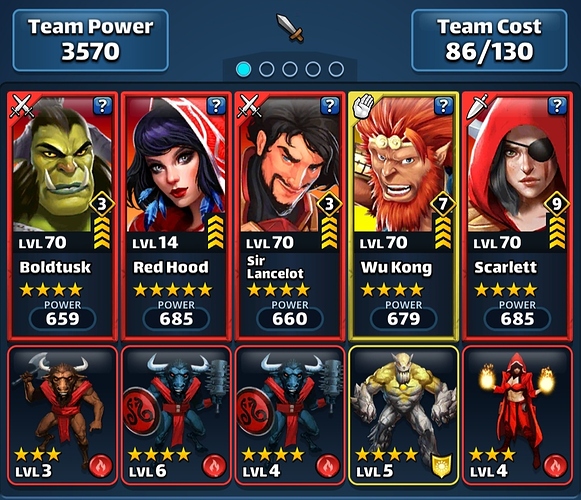 Maybe no changes for Legendary tier.

I forgot the event. Otherwise I would have gone with Hu tao at first instead of Hel

For some reason I thought Scarlett didn’t work well with Wilbur. Now I’m glad for the Sand Empires just so I can start using them together!

For some reason I thought Scarlett didn’t work well with Wilbur.

They work fairly well together in general, since Wilbur’s defense debuff will increase Scarlett’s damage.

The only argument against the combo is that Spirit Link will distribute her damage — but unless you’re literally only going to use Wilbur with AoE hitters and tile damage, that’s actually generally a benefit. And in the case of Challenge Events, it’s a huge benefit, because there are only 3 monsters or Bosses at a time, so it effectively evens out her damage across all of the targets.

Attack debuffs are also always hugely helpful, especially at Fast and against 3 targets.

And lastly, her attack stat is huge — so in a red stack with Wilbur and Boldtusk, she’s the reason why enemies die.

That’s all the more true with Emblems:

Now I’m glad for the Sand Empires just so I can start using them together!

Pirates will be a good place for them too, as this thread is about.

Green Titans are a great place for them together too.

I used them together for Ursena too — Scarlett’s attack debuff made Hard Mode pretty easy, and Wilbur is good for both survival and increasing tile damage.

I’m gonna go for completion on the legendary and epic levels, I don’t have enough good yellow heroes to get a high score in those…

On the rare level I don’t think I’ll be able to level up 5 Namahage, not enough time for that, so I’ll go with a Bane x 3 + Melia + Gan Ju team.

Hopefully I’ll be in the top 100 this time, fingers crossed

Sure, here you go: 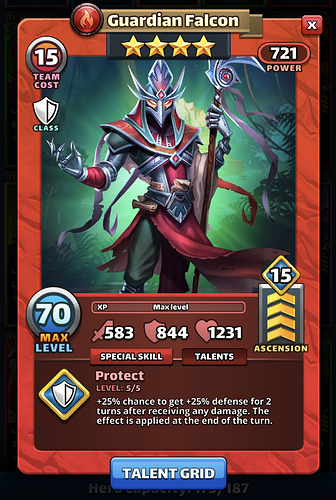 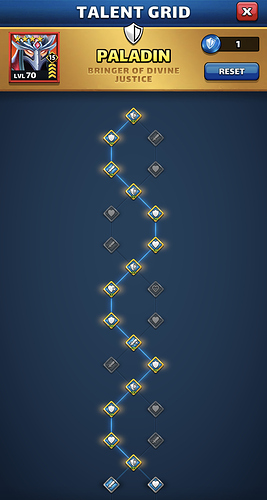 For wars, he’s on my avg mana red stack with bt and qoh so might not be used or in clean up.

Normally I’d enhance their strengths but for falcon, wondering if going attack would be more effective.

He can only pick up 45 more Attack by prioritizing it all of the time, which would max him at 643 instead of 598 — which is still pretty low.

I think given his intrinsic stats and being a Paladin, prioritizing Defense is a bigger payoff. He’ll have 880 Defense by +18, and 910 by +20. That’s amazing for survivability, and will help him still be usable on bigger titans, and take major sniper hits without issue.

can you show the talent tree as well? i just started embleming my Scarlett (after giving some to Marjana (+4 for now) who is on my defense team). Alternatively i have Kelile but Scarlett was my choice. I thought going all defense and health is a good idea since Scarlett dies way to soon i think… but your picture makes me rethink…what is your experience, how do you keep scarlett alive if you have chosen all attack…?

I love my all-attack Scarlett, she’s great for Titans, and I love her on my Raid and Quest teams.

I’m not a fan of trying to “fix” heroes with the Talent Grid. To me it just ends up averaging them all out into mud.

I prefer to emphasize their intrinsic strengths, and the strengths of their Class. For Scarlett that’s very clearly all about Attack.

She also picks up a fair amount of Defense and HP along the way anyway. Going the Attack route is 36 less Defense and 108 less HP than maxing those out. That would help, but it’s not going to make a radical difference to survivability. I prefer to have her huge Attack stat, since that’s where she really shines. 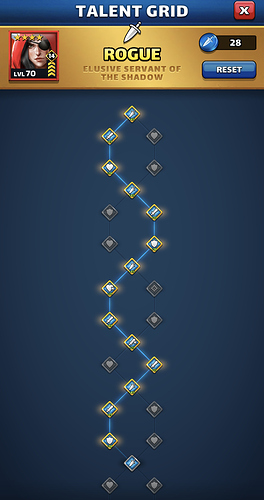 ok, thanks then i know what i’ll do…

I ended up going attack on falcon because I use him most on titans and challenge events, where tile damage is king and the inherent boost from the red defense down gets further amplified

Did the same with Gormek for the same reasons.

I have to wonder (maybe in risk of taking this a bit off-topic), what route would be best with Gormek? His HP is pretty much his only good stat…

To me Gormek its made to last long and debuff [which is useful for the snipers in the team or any other hard hitting heroes who can leave a mark] and not to hit hard and debuff like Grimm, so i would go all hp and def and leave the attack for last. But i believe you could also balance him a bit picking between att and def, but since he has a low stat attack i believe it wont make too much of a difference.