Obakan is not counter striking when hit

Obakan specialty of counter striking when hit isn’t working and it has caused me battle loss and less damage to Titan. Please fix. I have noticed it about 5 times in the past few days.

Can you please provide some kind of evidence?

In previous raids and wars Obakan counter attacked me like usual.

Ranger talent can bypass defensive buffs like counterattack, maybe this.

Evidence…? How can I provide evidence?

Take some videos of your battles against titan or in raids.
Best way to upload videos is to your YouTube account then copy and paste the link here.

…for real? Take a video…? I’m done with this game, not only the game cheats but the customer service sucks. This is not the first time you guys “brush,” my feedback, off. What is the point on sending you guys feedback about a problem when you guys, apparently, don’t care what us, the ones playing the game and putting time and money in it, has to say.

First off, I do sincerely wish you the best in whatever future game you choose to pick up… Hopefully that game will be bug free & when a bug is encountered, will be able to problem solve / rectify any “feedback” provided without additional details, information or whatever being offered as evidence of the bug.

Secondly, everyone in this thread who has responded to you, myself included, are just players. We’re here out of the goodwill of our soles and get nothing in return… So when we ask for evidence, videos etc… it’s not that we are able to “fix” the problem, only that we may be able to EXPLAIN what has happened/ offer insight OR ultimatley agree that, yes it looks like a bug…

But again, all the best in your future gaming experiences which will hopefully be “bug” free.

Then take a screenshot.

Most of the „bug reports“ like yours come up, but quite often there is a simple solution when looking in the details occurring in that specific situation.

So it’s quite fair from us to ask for screenshots or videos. Or even written details which enemy hit your Obakan. There are still quite more solutions than those we guessed until now like Tyr can also bypass riposte or kage dispelling before hitting …

According your last post, I feel that you really do not want our help or solutions, which can explain your situational (!!!) problem.

First of all, I gave you the insight, Obakan is not counter striking at times, second of all if you can’t fix or be able to look into it, than why are you replying like there’s something you could do… Where is the tech guys of this game? Anyways, thank you for your time my guy but another reason why I left the game, no game representative to answer serious inquiries.

If I hit him with my emblemed ranger, that ranger can bypass the riposte and then not get hit. There’s a lot of Rangers.

So rather than get snappy, try to answer the questions you were asked as sometimes it’s not a bug, it’s the game working as intended.

Let it go, guys, he’s not here for answers, he’s here to vent…

This is forum not game support. If you want to discuss a possible bug, this is the place. But if you want to report a bug, this is not the place, you should contact support:
https://support.smallgiantgames.com/hc/en-us/requests/new

However, I have to remind you, whether you discuss it in the forum or report it by submitting a request to game support, you have to present the proof. As of now, you only talk without giving any proof.

be able to look into it,

It’s up to you to enable us to get a look in it.
You have been asked several times.
So now it’s up to me to mute this thread.

There have been countless issues bought here that have been sorted out with out sgg staff needing to look into a problem. Also there’s been issues that have needed the sgg staff to look at as multiple people have come forward with said same issue. Your the only one and with no evidence just your word kinda don’t fly really.
As pointed we are players on here and the community here is willing to help.

It wasn’t a Ranger and it happened with a Titan as well… It’s irritating when you get doubted and given the go around. If I can’t speak with tech support than there’s no reason to explain and speak to anyone else.

If you want to contact tech support, use the link that I provided earlier. I have much experience dealing with their tech support that I know proof is vital in this matter.

If you don’t want to get doubted, show the proof.

Another things to consider:

@TailorMade here I give you an example how to present evidence/proof: 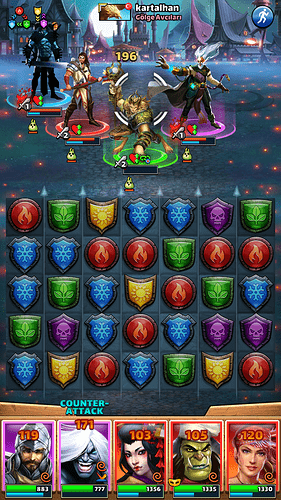 As you can see from the picture, Obakan’s counter buff is on active state as indicated by this icon:

NB: Obakan have to cast his special skill to activate this counter buff for 4 turns.

First of all, be aware when you go to report a bug in the game the game directs you to this section of the forum.

Having said that, when my soup was cold at restaurant, the owner demanded that I have a video of the problem uploaded to youtube, so this appears to be standard industry practice.