Now that everyone has lord loki

For the people who just got him for round 2 SE
How drastic has he improved your offense quality of life?

I want to run him on a rainbow team with motega, xnolphod, pengi, and probably hanitra… but it will take 3 months before he is fully leveled.

My mono blue is too good… he can’t crack the starting 5… but I’m legitimately happy to have him… I really want to copy ludwig… that would make me so happy.

I’ll be happy to answer in a month when he’s fully levelled but I’m very excited to use him. I’m working on Arco too so that’s a lot of food and heroes to blow through!

Funny here but I must be the few that does not reach out for Lord Loki in wars and raiding. Here is the thing and I understand the value of copy the opponent specials, but, when your roster develops and you have actual hero counters using Lord Loki in later developed roster game play might lose steam. Excellent hero for developing rosters I agree. Just not equal to the greats out there now. Happy gaming!

I agree but at the same time with all the new op heroes that appear every month LoLo helps alot
to improve the odds. Especially if you are not P2P

I’m running 4 tc20s… And no complaints because it had afforded me skadi and lord loki… But leveling with feeder heroes is from farming, ha1/3 and pausing the tcs for a few hours to do tc19.

I leveled xnolohod the other day… Along with some of kalo aouda and morel… And it cost 45 million in ham. It is worth the price, but damn… I can’t do that often… I’m down to roughly 135 million and it feels like a gut punch.

I have 58 maxed 5 stars and 15 LB 4 stars that can fill 5 star roles if needed, so I have a developed roster. Lord Loki is still a part of almost every raid attack team I put together. If there’s an Alfrike (or any powerful slow/v. slow hero) on the defense team Lord Loki can take advantage of his average speed and use that powerful special against the enemy team before it can in most cases. He loses his advantage when going against defenses made up of fast/v. fast heroes though. He also has the versatility to heal, attack, debuff, etc. that no other hero in the game has. He and Lady of the Lake are probably the two most game changing heroes I have on my roster. LotL is easy mode for map/quest stages and Lord Loki makes raiding allot easier.

I took him on my/his first raid today……sadly at 3/52 he was killed before I could see his special for the first time but I’m about to try again.

Sorry for going off topic but if I had him already I would have gone for Lep.

I’m so curious to see what she’s like, I’d love an opportunity in the future.

I’ve completed all S3 and finally thanks to SE I’ve now got my first S3 5*, it feels so much better than getting my first S1 5*.

Smart, I have 2 TC20s going and it’s netted me 6 five star heroes since Soul Exchange was introduced. I’m a bit of a hoarder and have over 80 million in ham crates. That said I don’t want to run out of strong rope for HA3!

Sorry, as with the other thread we all just got Mother North.

I run a mono blue team also. Im interested in who you have as your 5. Mine is milena-cMagni-frida-athena-LepusCB

Here’s what it is now… 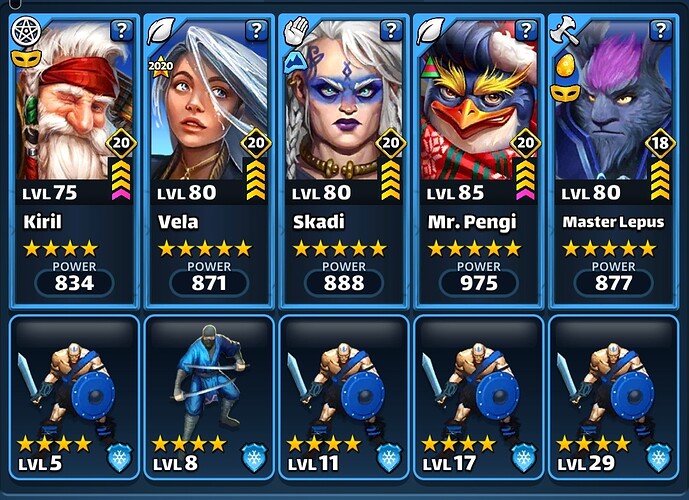 But when morel is finished it will be this. 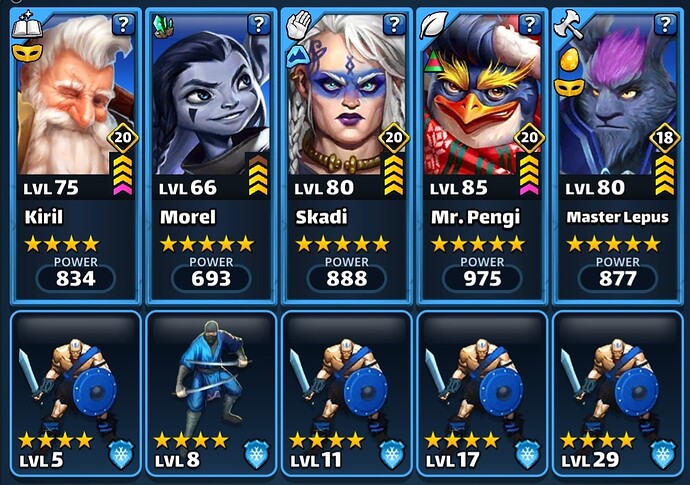 Or maybe vela stays in the picture over pengi… I’m trying to move away from mono… But she’s a tough mistress to shake.

I reluctantly shook mono a few months ago and am not looking back (apart from the occasional Leroyyyy Jenkins when I need to hit and short on time)
I find LoLo works most effectively as part of the 2 in 3/2, or the 1 in a 4/1 or 2/2/1; he is so manipulative of the enemy specials that he can be busy using them to help your survival whilst your other heroes charge up.
Then just mimic their most monstrous aoe and thank them for showing up.
Especially in rush, but also in regular matches, since abandoning mono my win rate has risen substantially, and my losses are usually my own fault, not the tiles’

We must have very different styles of play and opinion when it comes to Loki.

He’s the first name on my attack squad if I’m allowed to use him!

I don’t find him equal to the “greats” (of average speed or slower), I find him superior, as he’s just a faster version of them once mana broken.

His versatility is peerless, his role is whatever you choose, and he counters many of the major problems out there.

For the people who just got him for round 2 SE
How drastic has he improved your offense quality of life?

Wait what? If we were such whales to level him at once, in less than a day, don’t you think we would already have him? You made me feel bad about myself because I haven’t touch him yet!

This is a parody response thread actually

Now That Everyone Has Mother North General Discussion

Straight Up Facts: Mother North has a 50% revival rate. That breaks down into she revives 90% of the time on the team you’re raiding, and 10% of the time on your offense. But seriously, does the fact everyone will now have her 1) level the playing field, or 2) break the game? Annnnddddd, discuss.

I just find the projection so ridiculous in this thread

POLL: Soul Exchange #2 - Who did you take? General Discussion

The poll here states that LoLo is the most picked, and I loved my Loki as well. Wanna spread some love around

And I haven’t even voted yet.

Took Loki because it looks like he’s probably one of the most exciting heros to use, and fun. Yes, this war reminded me why it would be great to have MN as well (most battles went to OT because of her), but I have 0 regrets. Loki will be awesome!