That’s a very good point! I will try that combination. Which I feel will have a great synergy

I think I see what you’re saying, but she doesn’t affect the enemy’s attack at all. So yellow hitting stonecleave isn’t affected.

It’s in the wording on Stonecleave’s card…

No, Norns only works on offence.

So if stonecleave is with Norns on offence, then a purple enemy could be hit by strong purple tiles.

If they are both in defence then Norns effect is of no consequence because defence attacks are not strong/weak by element.

If stonecleave is hit by yellow tiles, they are completely unaffected by Norns special.

OK - but if Norns only works on defense then rounding back to JF discussion he should convert their special into increased defense for allies. Weakening defense is same as lowering it!!

@Lily_frogg this has been all discussed previously:

I see Norns as being PURELY FOR OFFENCE.

She goes nicely into a 3-2 or 4-1 yellow and purple stack when raiding against all the yellow/purple tanks which have one or both flanks as the opposite.

Norns effectively makes thosw enemies “weak” to ANY of the tiles you sling (yellow or purple)… Which is devestating to those defences as they are set up to DISCOURAGE a heavy stack against the tank colour.

If you stack 3 purple & 2 yellow against this defence (Norns as one of the yellow), you can target Guin and then make all three have weakness to BOTH yellow AND purple tiles… Effectively removing the whole point of that defence, which was set to make use of the “weak vs. strong” relationship that exists between yellow & purple…

Stack 3 yellow & 2 purples with Norns as one of your yellows. Same thing again. Target Boss with Norns special and suddenly the entire middle is weak vs. both yellow and purple tiles.

Stack a 2 Blue, 2 Red and 1 Norns. Targetting the middle three again and suddenly you get:
Telly weak to both the blue AND red tiles
Vela weak to the Red Tiles & neutral to blue
JF weak to blue & neutral to green

Question about Norns on defence:

Does anyone fought Norns in a PvP? How did she perform?

Regarding Norns vs. Jean-Francois

i fought NORN with JF. When i had buff from JF (New status aliments affecting defence will be replaced by 42% defence for 4 turns). Norns used her skill and I got Defesively weak agains:Ice.

Is that bug? I think JF buff is clear and should cancel Norns debuff.

Logic I’m using is that every hero who is flipped/ reversed by Jean Francois skill has both an Icon (status effect) AND a % modifier to either elemental defence or normal defence.
Norns only puts a status effect out.

Got confirmation from SGG staff regarding this.

Norns & JF interaction is WORKING AS INTENDED. Direct quote from the QA team:

“Norns skill doesn’t affect the defense status directly, is the reason its not blocked by JF.”

Thank you for the feedback Gunvor!

What do you think about 4-1 Norns, Frida, C.Sonya (or Ariel), Vela and Magni/Alice/Alasie vs Telly-Vela-GM(JF) teams? Will it work?

Hoping that Norns’ will fire and make telly weak to blue?

I think that makes the team very dependent on getting lots of yellow tiles quickly to make blue tiles strong.

getting lots of yellow tiles quickly

Do not think so. If you got at least 8 or 9 blue tiles, you can just search for yellows and cleanse with Sonya/Ariel.

But yes, this team is hope/luck dependent. But is it work when you have no other heroes and need to refresh a war field?

Would she get darts over a really well defined hero - Viv, Joon, Poseidon, Guin, Onatel? No.

Would she get darts over other mixed bags - leo, justice, inari, owl? Yes

I look forward to your continued observations about Norns, @JonahTheBard. This list makes me laugh, because so far, I have ascended three yellow legendaries - Poseidon, Onatel, and Vivica, in that order. My choices for my next set of darts (of which I presently have zero) will be Leo, Justice, and Norns. I was kind of leaning Leo, but I look forward to seeing what good you are able to wrangle out of Norns. As you say, good tile damage, a non-competitive class for emblems, and a realm bonus all keep her in the conversation.

Leo is fine, I use him reasonably often and his mana cut is decent. If he was released now, everyone would expect him to be fast, I think.

Justice is tank only, imho, and onatel is a scarier tank.

Compare Leo and Norns and Norns has a decent damage and hp advantage and the same Def. Total damage to the enemy is also higher. Leo’s special is the more useful more often, though. 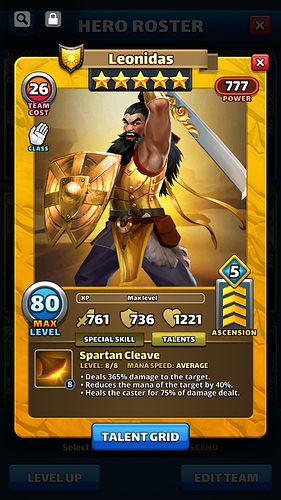 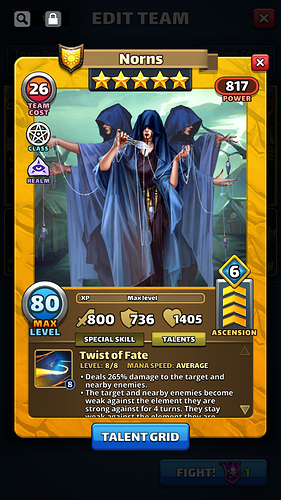 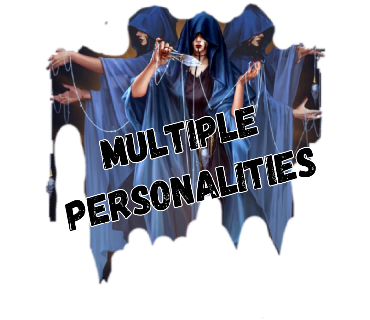 I found Norns on defense

Any new updates on how you are fairing with Norns?

You’re replying to one of my earlier born posts… just checking - have you read the latest stuff above?

Also interested in her. My only season 3 hero. From what i read she is a no on the defensive side

Norns special is damage only on defence, which generally makes her unattractive.

That being said she has a very good statline and hits three, so she’s done pretty much as well as justice on Def for me.

Personally, i would say 100% no. Main reason is that slash-attacks are “elemental independent”… So the normal attacks that a defence team make would have no benefit from the elemental resistance changes…

You wouldn’t see benefit from Norns affecting the offense team tiles with her on defense? Essentially making stacking a problem depending on boards of course. That is to say does Norns only affect a heroes defense or does the drop in elemental strength apply to an attack (tile damage of offensive opponent, not def slash attck) as well?