I would argue the language on her card is clear. It’s most peoples’ understanding of game mechanics that are not. Slash attacks have always been non-elemental, have they not?

I am not referring to slash attacks. I am referring to an enemies tiles being weak against strong color if Norns goes off on defense. For example I attack a team with Norns on defense and I happen to stack red since Telly is tank. Should Norns go off, my red tiles should effectively become weak against green. That is why the language is not clear imo. The card does not specify that the elemental debuff applies only when attacking. Just stating that enemies become weak against the color they are normally strong against implies being weak when defending and attacking.

Interesting… hadn’t thought of it that way, but the way you describe it makes some sense. Intriguing!

Thanks @Dan7. Maybe hard to see at first, but it’s how I see it

You are correct in my opinion. The card reads clear and it shouldn’t be different on offense/defense. If it worked this way she would be a much more Versatile hero and a welcomed addition to defense. I would love for this point to be put forward in a rebalance thread to be considered by the devs. It doesn’t make Norns overpowered, the change would just kind of put her where she is supposed to be. Without a change like this she’s kind of lacking.

My yellows are Malosi+12, Ranvir 3.70, and Norns 1.1. Currently I am using Malosi as my yellow in any rainbow defense, I wonder if Norns would be an improvement over Malosi while I wait for a better defe yellow such as Joon or Poseidon.

After all, Norns is dealing quite massive damage.

I have mats to fully ascend 2 yellow 5* heroes.

Had chance to play against Norns today, she was on left wing. She even had a chance to fire.

Sadly, she did nothing.

I don’t see a point of a hero like that for defense. But similarly, I do not see a point for hero like Guin on offense. These are specialists and you need to know which purpose do they serve before you max them.

As I mentioned elsewhere, Norns would be great hero if the game was little deeper than ‘take your stack and go yolo’.

You would be better off with any other hero on defense. Hu Tao, li xiu, literally anyone. Norns does zero to warrant taking up a spot on defense.

I have norns in defense and it’s better there than a white rabbit. In defense it is not as strong as in attack, as in defense only heroes usually attack and it should work on their specials as well.

Except provide way more damage than Hu or Li, and survive far longer…

But then that’s what happens when you compare 4* to 5* in a fair fight - they do have way higher stats and it really does show.

I have norns in defense and it’s better there than a white rabbit. In defense it is not as strong as in attack, as in defense only heroes usually attack and it should work on their specials as well.

White Rabbit casts faster, inflicts a status ailment that actually does something on defence and inflicts more direct damage.

I have both maxed and love them both, but on defence it’s a no contest.

I have norns in defense and it’s better there than a white rabbit.

White rabbit is for sure better than Norns on defense. If we directly compare the two, they have similar HP while Norns has higher attack and White Rabbit has higher defense. Norn’s does 265% dmg to 3 with 770 attack while White Rabbit does 280% dmg to 3 with 731 attack. I would say that is similar damage. However, White rabbit is FAST speed and gives defense down which is of much higher utility than an element change.

Respect for your point of view @BubblesUK. We just disagree on this point. Indeed Norns does not have to be used for defense and the same could be said for lots of heroes.

I respect your POV also, and I’m happy to agree to disagree.

I’m fine with heroes being a bit niche…
Whilst I don’t think she’d be OP with your suggestion, I just don’t see the point - and I think changing heroes that are fine to make them more versatile is kinda destabilising, especially so soon after release and especially when there’s nothing wrong with them generally (and especially when the niche missing is defence, the least valuable niche IMHO).

But hey, I can always respect a reasoned point of view and I appreciate where you’re coming from

I also thought the white rabbit would be better but then my glasses fell very low and when I put the norns I stick to it about. It’s just my personal experience that it will last longer in raids and war.

…but then my glasses fell very low and when I put the norns I stick to it about.

Not really sure what you mean but statistically speaking, White rabbit should fire more frequently than Norns on defense team, and therefore contribute to more potential successful defenses. But you do you…

But similarly, I do not see a point for hero like Guin on offense.

The difference though is that Guin and her special work 100% on offense or defense. Whether or not one uses her for either, her special is in tact on both offense and defense. Her mana cut for example; whether she is in def or offense, works either way. It would be a different story if Guin only performed her mana cut on offense. What would players think of Guin if her mana cut or her heal only worked if her special was fired from the offensive end of the court and wasn’t allowed to go off on defense? Had that been the case when she was released I believe it would have been called out. Only under the circumstances that both Norns and Guin (or any other hero for that matter) both have their specials in tact on offense and defense do they become comparable imo.
As it stands now Guin can be used 100% for either offense or defense without losing a chunk of her special even in light of her defensive orientation.

That is the crux of my debate on Norns. Any hero can tilt offensively or defensively due to their qualities as a whole. I am not debating whether a hero is better suited to either def or offense. I am just highlighting that Norns was stripped of half her special when on defense. I believe a new precedent was set by eliminating the 2nd half of her special when Norns fires on defense.

As an aside though, whether Norns or some other hero in the future…I very much like the idea of a hero that weakens tiles (based on strong/weak orientation of attackers) as a defender. Would add something new to the game and make stacking riskier.

Of course that’s a matter of perspective, but one could argue about that long time ago when elemental debuff was introduced. While on offense it impacts the tile damage and specials, on defense it really only helps with the specials as slash damage is “elemental-free”. Now if you ask me, I’d say the whole idea behind fighting against players should be revisited so I’m not defending that. But objectively looking, Norns fits into the existing game mechanics, she’s not ‘broken’. Just what she does doesn’t benefit defense mechanics at all. Frankly, I’d have hard time thinking of how that could work, without impacting current damage formulas etc.

Norns fits into the existing game mechanics, she’s not ‘broken’.

This is true. She isn’t broken, I just don’t think she lives up to her full potential based on her special ability. I see her more as half baked or incomplete as opposed to broken.

Edit: after thinking about it for a few I would add that just because she isn’t broken doesn’t mean that more couldn’t be expected of her or that she couldn’t be improved. Kong wasn’t broken, but he got a buff to his special in terms of damage % increase as well as a cleanse as one example.

but one could argue about that long time ago when elemental debuff was introduced. While on offense it impacts the tile damage and specials, on defense it really only helps with the specials as slash damage is “elemental-free”.

I get the elemental debuff thing not affecting slash attacks, but slash attacks already get a 20% boost just due to being defense anyway so adding more on top of that would potentially be an issue, especially when those slash attacks can also be boosted further by attck buffs from other heroes. Slash attacks just aren’t a concern with Norns imo though. It’s the tiles for an attacking offense that I believe need to fall under her specials area of concern.

I’d have hard time thinking of how that could work, without impacting current damage formulas etc.

My assumption would be that SG could make it work if they wanted. Having to revisit damage formulas shouldn’t be an excuse for SG not to implement new abilities imo.

I’m pretty sure that elemental debuff does effect slash attacks on defense already. Back in the dual panther days I remember her slashes getting very aggressive. Are you 100% on this?

Went and tested it (so hard to find an eve, panther or frida these days), the troop was mana. 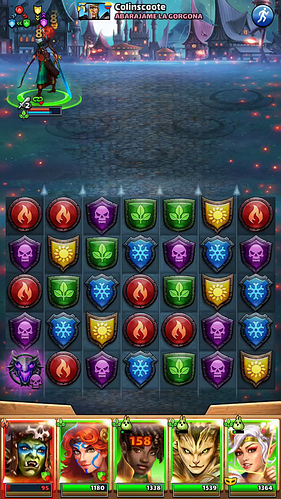 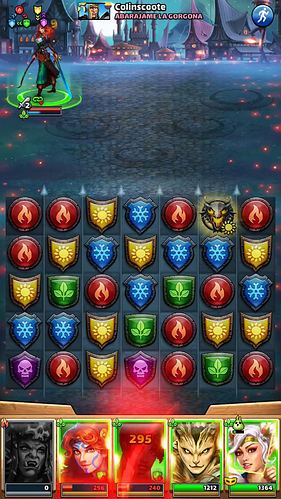