Does anyone fought Norns in a PvP? How did she perform?

I got her and I am still not sure if to level her. And I really don’t understand how her special skill would work in a defence line-up.

In terms of why I specifically say she is purely offence:

I see Norns as being PURELY FOR OFFENCE.

She goes nicely into a 3-2 or 4-1 yellow and purple stack when raiding against all the yellow/purple tanks which have one or both flanks as the opposite.

Norns effectively makes thosw enemies “weak” to ANY of the tiles you sling (yellow or purple)… Which is devestating to those defences as they are set up to DISCOURAGE a heavy stack against the tank colour.

If you stack 3 purple & 2 yellow against this defence (Norns as one of the yellow), you can target Guin and then make all three have weakness to BOTH yellow AND purple tiles… Effectively removing the whole point of that defence, which was set to make use of the “weak vs. strong” relationship that exists between yellow & purple…

Stack 3 yellow & 2 purples with Norns as one of your yellows. Same thing again. Target Boss with Norns special and suddenly the entire middle is weak vs. both yellow and purple tiles.

Stack a 2 Blue, 2 Red and 1 Norns. Targetting the middle three again and suddenly you get:
Telly weak to both the blue AND red tiles
Vela weak to the Red Tiles & neutral to blue
JF weak to blue & neutral to green

Yeah, it doesn’t take a complex explanation. Her secondary effect has no impact on defense. Don’t use her.

On offense? I’m looking to work her into some rainbow teams in war, see what I can do…

She is literally ineffective on defense because he defense down on color doesn’t apply to special skills.

No no no no

I’m using Norn as my tanks, just for kicks.

Her stat line is actually very high and I’m sitting at exactly the same place I was with Anzogh, justice or Thorne who are all around +6, same as my Norn 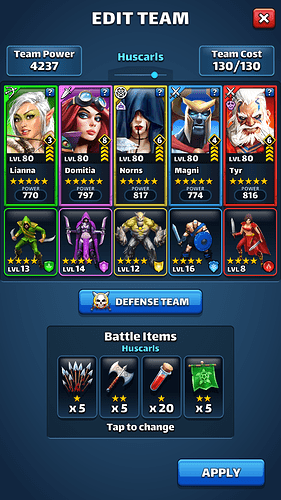 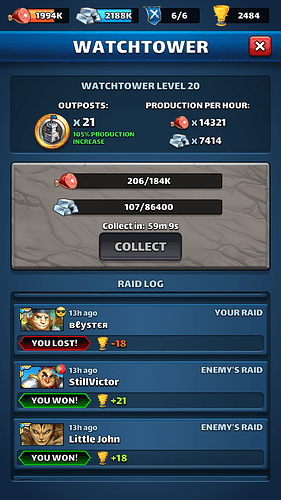 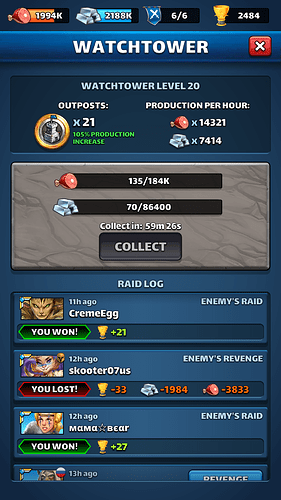 Thanks for your feedbacks. @JonahTheBard: let me know how she is performing as a tank in the next days/weeks. If someone forwards you a video fighting you in PvP would be nice. I hardly find something, how Norns works in Def. Best

I’ve seen them twice but rerolled because it was on guys with +500 TP. Otherwise they are not defense material, because there their special does only damage, though their realm bonus might be annoying if one does not count on that (might happen now as it is a relatively new mechanic, but down the road it will be less and less of a case).

I have them, but did not use them that much yet. However they will probably shine on Titan fights (especially if you have Falcon and Jackal, but don’t have Panther and Evelyn) and possibly on Legendary challenge event, where adding a second weakness might help you to get rid of bosses quicker with correct team setup.

With the sorcerer’s talent, norns has a couple of little mana tricks

This is the main benefit imho

The description says « The target and nearby enemies become weak against the element they are strong against ». Maybe I don’t get it the right way, but this should make the enemy tiles weak as well in defense, no ? I mean, I know that’s not really working like this right now, but don’t you think it’s a bug ?

I thought she would help on defense against stacks.
Meaning if I had a green tank and was attacked by a red stack when Norns fired red would become weak against red so my green tank would take less damage.
This is not how her special works?

Thank you for this!
I feel embarrassed and foolish that I have played for around 8 months and did not know that strong element against weak element did not impact slash attacks and special skills.

So for example if my Mitsuko gets attacked by Blue opponents, lets say 5 … after Norns fire the blue opponents become weak against Red… So their blue tiles do jackshit…m

So for example my def def team is Norns,Tely,Vela… And you bring a red stack … after Norns fire three red heroes become weak against green… So the red tiles do nothing…

When Norns is on defence, special skill inflicts damage only.

Great fun hero, great stats, but does nothing special on defence.

Can somebody confirm this?

By attacking a team with Norns, let them fire and let see if the attacking tiles (used to be strong…) become weak…

Norns is unfortunately only a half thought out hero. Her elemental debuff should also work on defense by weakening enemy tiles based on the same principles that are used for her elemental debuff when she is on offense. It’s really a shame because had SG included defensive considerations with her special, she would have been great.

TBH I’m fine with it.

Most maxed heroes in any person’s roster never see defence use.
When you move into ascending any 5*, your 4* will start sinking off your defence… When you ascend more and more 5*, most of your 5* never make it onto defence.

Norns doesn’t need to be on my defence, so I’m happy as long as she’s useful/fun offensively - she is, so that’s fine by me.

As an early 5* pick she’ll still outperform 4* on defence to begin with purely for the stat gap - later, other 5* holy will do better and replace her, which is also fine because she’s still useful.

The flipside is Ratatoskr - he performs differently on attack or defence, which is what people are suggesting she should do (but doesn’t)… But then, I didn’t ascend Ratatoskr for defence and would’ve done even if he didn’t have that defensive alternative version.

I don’t really see a problem here, to be honest…

Respect for your point of view @BubblesUK. We just disagree on this point. Indeed Norns does not have to be used for defense and the same could be said for lots of heroes. However, she should be a viable option for defense in the event one would like to use her there and completely cutting out what should be part of her special when on defense just seems lazy on SGs part. As far as I know she is the only hero in game who has an aspect to her special that doesn’t exist when used on defense. Not just useless, but literally doesn’t exist. It would be akin to Seshat’s dispel only working when she fires offensively. Or Hatter only stealing buffs when he is offense. It’s just not consistent in any way when you look at the game as a whole.

SG didn’t do any favors by being vague about Norns special. Her special doesn’t read as weak against attack or defense. It just states as weak in general on her card which is how the special should work. Ratatoskr’s card is very specific in how the special works on both offenses and defense. The least SG could do is to do the same with Norns and other heroes in the future. It is misleading especially for anyone who might have s summoned for her based on the “generality” of how her card reads. At the very least be specific about what she does or doesn’t do before someone spends $ trying to get her. It’s of course well known now, but it should have been a given from the start and all SG had to do was word the card correctly and specifically.