Noor Summoned Minion Out of Turn

I had just charged all of my heroes mana, Noor was the last one left to kill in a raid. Noor was not charged, and had one minion already. I used Kunchen’s special, then just after I clicked on Seshat’s special…Noor summoned another minion.

It wasn’t even their turn, I was still in the middle of my turn and firing off specials, there’s no reasonable explaination as to why Noor would suddenly gain another minion. And I didn’t just look up and it was there, I saw it appear.

This is Noor’s Innate Ability: 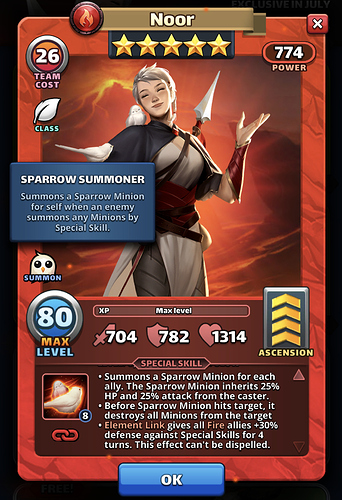 Middle left of the card is the section.

Ah ok, I checked her card but. missed that. Thanks!

One other thing I’d note about Noor’s special ability is that the animation shows the minion immediately. In reality, that minion is not summoned until after the attack. That means the damage calculations are based on her current health/minions (and thus why the new minion never takes damage). So if you kill her outright with Seshat she will not summon a new minion.