No titan parts given plus grade calculation wrong?

I just left my alliance and I went into a temp one with my alt account. Today there was our 2nd titan, a 2* which I hit with 3 harpoons and got titan parts in my regular account. It was a two star which needed only 2 harpoons for 1st tier to get parts. In my main and alt 2 very different things happened.
2* titan
Main A+ loot tier 5. Titan parts given.
Alt A loot tier 2? Shouldn’t it be 4? No titan parts.

Its embarrassing saying im fighting this low bit while I’m looking for new home I might as well. My titan chest gave me a tome and a EHT. And 2 of those titans were a 1 and 2*. Not bad… 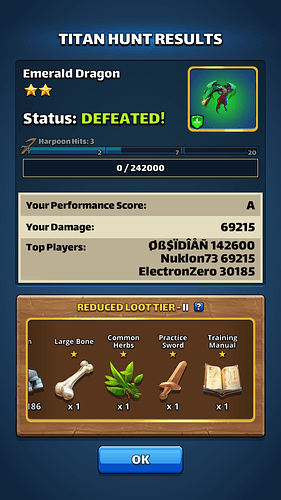 Screenshot_2019-10-02-20-30-27720×1280 351 KB
Screenshot with no titan parts and wrong grade? I just noticed it days reduced loot tier but I thought that was if your last titan was less than 24 hours ago. I think that could be the reason, I added my alt just now bit it was gone from other alliance for longer than 24 hours but shouldn’t I still get titan parts even if tier is reduced and is that the reason?
UroSecondo October 3, 2019, 7:26am #3

I added my alt just now bit it was gone from other alliance for longer than 24 hours but shouldn’t I still get titan parts even if tier is reduced and is that the reason?

(don’t know if I have understood you corrextly, but)
This. If you join an Alliance after the Titan spawn, you’re going to have a reduced loot tier.

OK, reduced loot tier I can understand but why no titan parts, shouldn’t they be in any loot tier even if the other loot is reduced?

No, I think (but I’m not sure) that it works like Rare Titans (you won’t -should?- get emblems or Bonus if you’re not present at spawn time of the Rare). And similarly you’re not going to receive Titan Parts. Otherwise it would be exploitable by mercs.

OK, its not a huge deal for the account since it was my alt and this is a temp alliance I created. Just wanted to make sure it wasn’t a bug where people didn’t get titan parts. I think I might check the solution box so this gets wrapped up.