Next hero of the month

Having these stats, would someone be ashamed to put him in the middle?

At first I wasn’t impressed but since he has exceptional tile damage, he may be worth it. Unfortunately I don’t have the tonics to max him but I think he would be a great addition because besides Elk and Groot, I don’t have any really good nature 5*s

Yeah he is awesome. Who used him on beta told he is a great option for wukong on high * titans. Wu doesn’t survive one strike from a 12* titan (even 11* kill him without green banner or axe) and Gregorion generates so much extra damage that compensates.

So use them on Titans and charge their Mana from the get go?

Any word on August’s hero of the month?

August will be a holy hero, grandson of Bruce Lee, with fast mana and will hit 3 enemies and give them blind like Joon. 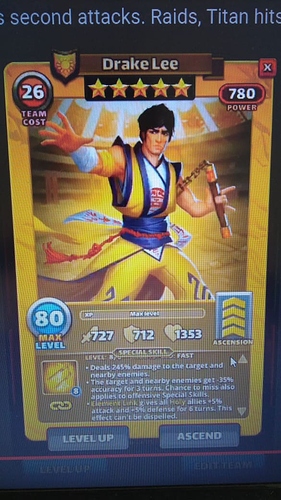 August will be a holy hero, grandson of Bruce Lee, with fast mana and will hit 3 enemies and give them blind like Joon.

Interesting… if he has the speed of Bruce Lee, he should charge his mana with 1 tile!

How can either of these guys be a nerfed liana when she’s a sniper and they’re not? They have totally different uses unless I’m missing something.

Either way I can’t wait for July!

Do his stats and special remain unchanged?

It is actually between Joon and Hu Tao. It is the missing blind nearby enemies hero. Now we have a single blinder Joon, nearby blinder Drake, and all blinder Hu Tao and Justice.

Love it…that’s how it works huh?

I dunno. Wu Kong + Ares + Defense Down + Elemental Def Down + Elemental Link has been a thing for several months at least. I’m hoping that since they didn’t nerf Ares, they probably won’t nerf Gregorion.

Is Ares/Gregorian better in that team than Boldtusk/Kiril? Are people really leaving attack buff out in favor of a crit?

Ares buffs both attack and crit, so you could potentially get away with just using him. Since Gregorion only buffs crit, though, adding Boldtusk/Kiril would certainly be helpful.

I want Drake Lee because I am a big fan of Bruce Lee. But it sounds like Gregorion is much better. What are your opinions on this matter?

They seems good heroes but the thing is that greens lack heroes that increase titans damage (with the exception of Brienne) and Gregorian will surely have his spot and while Drake lee does nothing new, it is an avreage hero.

It could be good for who find it and don’t have anyone where to put darts but I’ll avoid pulls when it’ll be the HOTM.

wait a second … Greg 30% critical + epic troops with critical damage (15% maximum) would be practically a critical hit every two hits.