The placings are really good, but what is super impressive imho is the “no WE refills used” part. I doubt all of it can be attributed to lucky boards since there are so many stages to play, so your roster and tactics must have been on point. Great job!

That is super impressive!!! ( especially the part of no we refills and plenty of battle items ).

Maybe you could share a trick or two ( considering is competition between all of us would be fine if you don’t want to).

Sure, this is probably nothing new, but here’s what I focus on:

@zephyr1 with the addition of family bonuses to event heroes, what do you think about putting all the family in this thread, as opposed to only the new ones. Or possibly starting separate threads for each family. Would be nice to see Finley along with say Sargasso in one thread like you have the new ones listed, for theory crafting purposes. I think there are some fun things to play with family bonus wise whether figuring out a full rainbow team (Riddles might be good) or a 3:2 teams with say Atlantis/Pirates or something. BTW discussions ive had, it appears that a full Riddles family with mana troops and bonuses would make all the Fast heroes Very Fast i.e. 3 ghost tiles for full charge on a Fast.

@zephyr1 with the addition of family bonuses to event heroes, what do you think about putting all the family in this thread, as opposed to only the new ones.

Sure, I was planning to make the Wonderland threads today, so I can do ones for the existing heroes too, not just the new ones.

thanks…I am excited for this full family

Might be a dumb question, but does the Pirates event only happen once a year?

does the Pirates event only happen once a year?

The Challenge Events rotate, so each one normally happens every 5 months.

Because of the revamps in 2019, the schedule was off, and some Challenge Events repeated more often, while others (Pirates in particular) were skipped. But we should be back to normal now.

The new rotation appears to be:

See how all pirates family performs on raid defense here

Thanks for all those clips. Really interesting to see those families in action.

42 posts were merged into an existing topic:

Marie is cute! That counts!

Bad luck finally ended. Would feel better if I didn’t have a Telluria maxed already but can’t complain about a second one. My first Peters (the last 4* in the game I didn’t have and wanted before S3… now I only lack Mireweave and Boomer). And first MT, with almost full set of Tabards to max her soon.

Satisfied for now, given it’s only 12 pulls. I’ll take few more with the extra coins during the event. I think MT is what I wanted really, she looks fun. Finley is superior but my ascension queue of blues is quite busy already (Misandra, Vela, Miki…). Maybe Locke is fun also, but DOT disappointed me too often. Rest is meh I guess.

! 200 summons not a single event 5*. Quintus, Sartana, Magni and Elena tho + a couple of HoTM. All dupes, triplets or octuples by now. Sad not mad

Better luck to the rest of you!

Just got Finley in a 10 pull. My current defense is Alasie/Mitsuko/Kunchen/Drake Fong/Kingston. Is Finley a straight upgrade to my defense? I have Vela at 3/70 and was actually planning to give her scopes today. Should Finley get them instead? Then give him all of Alasie’s emblems and replace her on defense?

Finley is OP IMO so he should replace Alasie 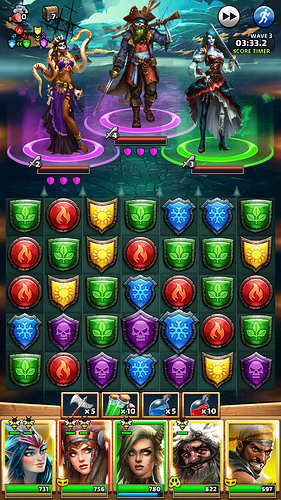 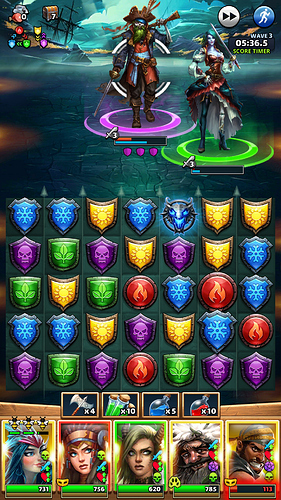 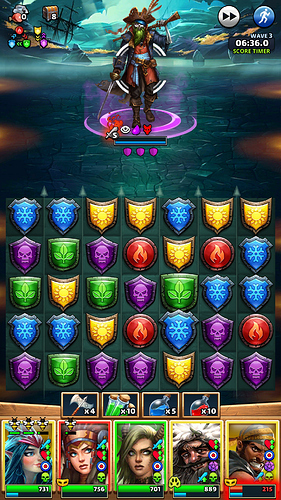 Here’s what I used for rare after about stage 9. With Kvasir and 2 healers it was easy.

10 pull with gems: boomer and elkanen

Bought the offer and did another ten pull cause why not… 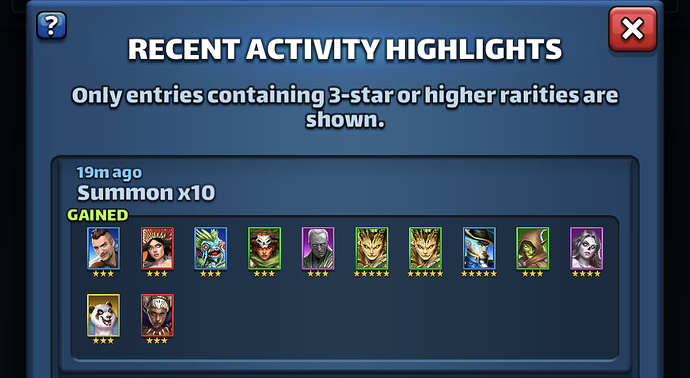 30 pulls finally netted my account a 5* pirate. Sargasso. I think he’ll do fine vs Field Aid and annoying healer tanks.

Was hoping for Finley (like everyone else) ended up with Marie, Kestrel x2, 2nd Locke and my 8th Telluria. I fed off 3 Tellurias to max Guin after the pulls, so back to a more reasonable 5 Tellurias.

Will have to read up on Kestrel as I think I heard people say he was not very good… but that might just be compared to the best heroes available. Either way, I need to work on red soon, so it’ll prolly be between Kestrel, Jean Francois or Azlar (3/70)… I could also do PiB, 2nd BK, 2nd Grazul, 2nd Azlar, 2nd JF or Khagen. Lots of choices here.

Nice haul, how many pulls did that take you? I think Kestrell is good, maybe the best of your options (I like JF a lot but he is a bit situational)

I didn’t count, but threw a couple hundred at it, so it was more than a few, but less than too much, lolz. Thanks, yeah I’m happy with it. Hopefully Finley will show up next time.