New Pirates Event. Am I missing something?

Lady of the Lake is amazing, my favorite pull from Avalon.

If it were not for Zimkitha I would have actually spent a little to pull in Pirates, but I’m hoping I can snag her while she’s featured in Atlantis

But Finley, Vodnik, Lady Locke are all great grabs!
Don’t know about Kestrel too much but I’ve raided and he was good. The rest eh lol

Its mainly the old heroes most have or dont want

I have victor and I am NOT crazy about him

I feel he is the BEST pirate I have

Well, I am kinda sorta looking forward to this event. I don’t have any heroes from this event, so pulling a special would be cool. And I do have 9 challenge coins, so one more and I can do a free summon.

Lady Locke is the most underestimated hero around. She is fantastic. In events, if one is not going for the thousand crafts, you fire her and just watch minions dying while you build specials. Her tile damage is very high when going for blue titans. Never regreted maxing her

I want Lady Locke so bad. Her and Finley are definitely the must haves for me.

Anyone know if there will be any new Heroes in this upcoming Pirates ? And is there a place where i can see all the Pirate Heroes ?

This thread will have all the info once it comes out in release, and has links to most event things one needs:

NOTE: Please do not, under any circumstances, share IMAGES OR VIDEOS from Beta in this or any public Forum thread. Violations can cause players to lose their Beta accounts, or threads to be closed down. This thread is to provide early insights and discussion on the new Pirates of Corellia Challenge Event overhaul. Don’t get too attached Details from Beta, especially brand-new Beta content, don’t tend to be very reliable for actual release. It’s incredibly common that features are changed d…

What’s wrong with the Pirate’s Event that has everyone so dismissive?

When I first started forum posting, I too got on the “pirates suck” train. I have a 3/70 Kestrel, and he was the first 5* I ever got. Looking at their stats more objectively, I think none of the pirates are bad, per say. It’s just none of them are really game breaking. They’re all just okay. Not great, not terrible, just okay. Peters and Finley are the clear winners in terms of quality, and Boomer is the booby prize.

Pirates doesn’t have the fantastic highs or crippling lows of the other event heroes. For every Panther there’s an Owl, for every Red Hood there’s a Rumplestiltskin. I think Knights has the privilege of highest concentration of game-breaking heroes, so compared to that high water mark, Pirates falls short. But they can’t all be winners.

Boomer is the worst 4* period,

Gobbler WILL fight you. And die because of his bad defense. But I’m not sure Boomer is bad enough to dislodge Gobbler from bad hero mountain.

I would still try at the Atlantis Summon because there are some really good purple heroes aside from Proteus. Kageburado, Ursena, and on top of having a chance at all the vanilla purple heroes as well.

Decision made: I’m only pulling for Atlantis this month. It was mainly based on getting the bonus ascension items. I’m so unlucky with summons that I keep my expectations very low for fancy 5 stars.

@princess1 That is something I had to learn the hard way. I didn’t get my very first five star until about 6 months of playing in and I have not gotten one since. And those bonus ascension items are a nice incentive to pull for Atlantis. I am just working on building up my 3 stars for rare difficulty stuff and tourneys. And building up my 4 stars which is turning out quite nicely on both profiles. 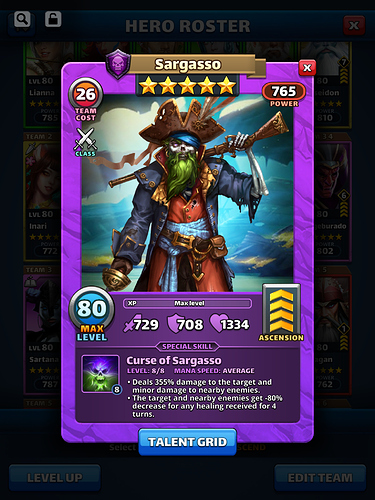 Sargasso is very good for AW field aid. Other than that can be used for anti Guin/Vivica.

Snipe hit can use a buff though.

Not really. For a hero with that strong of a base attack, that damage he does to one hero (and minor damage to nearby allies) is pretty ■■■■■’n.

He is definitely not bad but lacking a certain “kick” to it for someone to have the urge to pull for him.

Would be get tabards? Not sure.

He would seem more like a complimentary 5* rather than a yay hero.

He’s not a flagship hero no, pun not intended. One usually seeks a vanguard, tip of the spear hero to act as an anchor for a 3 stack or mono team, depending on the match.

For my red that’s Ares who barring some really bad luck is usually the last to die. For my blue that’s Frida, who does kinda average to subpar damage by herself but opens so many doors for Richard and Grimm to crash through, and Panther does that in my purple too, though she needed a Seshat to really round out that stack (though Seshat is easily a headliner in my off-color two stack in the 3-2 split). For my yellow, I’d say it’s Vivica who can rally average to poor boards. My green was anchored by either Elkanen or a +18 Caedmon who, don’t get me wrong are solid but don’t have the raw power of the others, but since I pulled both Kingston and Peters in the same ten pull, they can carry the Kings Banner into the fray, as it were.

Sargasso is a solid hero but not a core to build a team around.

I think Lady Locke and Sargosso could use buffs to make them more desirable.

If lady Locke were bumped up to fast mana, I think that would make her very desirable for her cleanse. Decrease the amount of damage she does, but make it so that if her DoT gets dispelled, she inflicts 50% of the damage it would have done immediately.

For Sargosso, make his 80% health gain reduction non-dispellable and have him and his nearby allies gain 25% attack for 4 turns.

Cap’n Kesteral isn’t bad, but he lacks that intimidating factor. If they gave him a mana cut after he struck his 3 (up to 3) victims, I think people would be more excited for him. However, since he is based off of Jack Sparrow (who is notorious for pulling tricks that cause his enemies to damage themselves) a self attack or blind may be more fitting, and, depending on its strength/potency, could affect all three heroes hit or just the center hero.

How’s that for a christmas song?

Well, I mean I think that sounds great, especially Kestrel since I have him, but I’m not the one you need to convince to buff the pirate heroes. It’s not like it would take much effort to turn a dud hero into a living god.

From what I perceive from my limited awareness of balance changes, SGG seems pretty conservative in how they adjust heroes that are perceived to be weak, and it took several rounds of buffs to turn heroes like Leonidas, Thorne, and Elkanen from the undisputed kings of sucky-hero mountain into

“they’re okay I guess,” so something as drastic as what you’re proposing seems… unlikely to be implemented, if I put it mildly.

But I’m all for buffing Captain Kestrel to make him better and thus more desirable. I gueeeeeeesssssss the other pirates can be buffed too. If you insist.

Well SG technically already buffed Lady Locke one by decreasing her DoT turn output from 6 to 4, which gave each affected hero more damage over fewer turns, but I think she needs that extra safety measure for when her DoT gets dispelled. Sargosso is another story altogether. As the supposed “boss” of the Pirate’s Event, he should, imo, be more powerful.