No - those aren’t gender specific… have you ever been to the beach?

Women not fairly represented?! What are we talking about? I would be more worried about man kind not being fairly represented… I mean, come on! I can’t place a gender on more the half the Atlantis characters! Who could tell if Namahage Danzaburo or Agwe are boys or girls? Who even cares? I’m certain that when any hero unleashes a devastating special obliterating your team, the first thing that comes to mind should be: “Wow! Look at that native american girl go! Great work!” I think you are trying to create a problem where there is none…

So…lets continue:
Bools: yes, Bane is a person of color. So are Azar, Shaarkot, Jahangir, Kailani, Keleli. Just to the ones I know. Then there are the characters of difference: little people like Koril and Boril, Elvin, Animal/Human combos like Chou and Grimm. Animals who stand on their hind legs and fight in a fashion more human than four-legged animal. We could compare that to the character list of Caucasian peoples.

What I’m asking for is skin tones more representative of my world. For Pete sake, I’m an artist not an electrician, Jim! My world isn’t all Caucasian or even over 50% Caucasian.

And criminy, I’ve been dealing with this for 40 years…before PC was PC. BTW, we don’t use the word feminist 'round here…we use the term equalist.

I’ve been playing RPGs off-line for 40 years–i was one of those so-called geeks. I raised these questions then. Sure. But now’s an even better time to raise such concerns.

I was raising some ideas, maaaan. If I could have found the venue I wanted, I’d’ve raised these ideas to the powers that be, not to all y’all. But i couldnt. So here ya go.

BTW: I haven’t run into Alasie yet. Matter of fact, I have only one 5 star hero so far.

And To whoever said it: Sonya and Grimm are both 4 star heros. Grimm is not a 5 star.

The topic is previously well covered ground. If you are claiming SG are racist, classist, sexist, etc folk, this thread ends here.

Now, now, your approach is discriminative! Kiril and Boril are not little people… they are DWARVES, and proud of it!!! Haven’t you seen LOTR? Call them little to their face and they will smash you with their not so little war hammers (or tankard, in Kiril’s case)!

anything i say that doesnt speak in favor of the devs and their pocketbook is bein flahges. flagged. SG get to flaggin, you’ll be busy for awhile

Is Victor “Caucasian” or “Undead”? 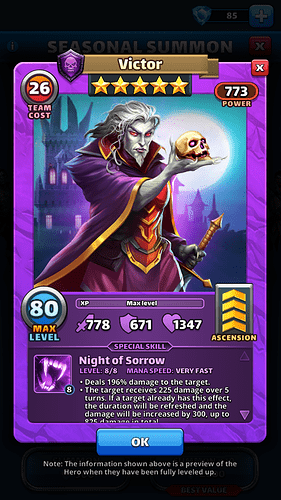 this thread has actually been quite entertaining. i was annoyed when i first read it but the replies have made it a must read…this should be a pinned thread. and i just got flagged. i shouldnt have said anything about the squirrel, thanks a lot @Resol lol

He is grey …don’t be greyphobic

he doesnt look human. that automatically makes him caucasian according to the OP

We need more ant like heroes! Ants arent properly represented in this game.

agreed. we have a spider titan. where are the army ants and cockroaches to team up against it lol

someone keeps flagging my replies.

mine too. rook…cough…kerridoc…cough but I’m not sure who

Must be a cat problem. Darn cats!

Let’s take a look at how the game is evolving and how SGG seems to be heading in a more progressive direction.

The artwork does show a clear slant, though. Gregorion could have been a real beefcake, like Colen, but instead looks like a Lego character. Whereas most of the 5* women are implausibly proportioned (though nice to see Khiona and Misandra looking more like actual humans.) This is a typical slant to fantasy art, but it doesn’t mean that SGG needs to commission artists that perpetuate it.

My conclusion is that SGG is making conscious decisions to bring more diversity to the heroes. I would like to see more, but I think the vector is pointing in the right direction.

21 Likes
Is Gravemaker male or female?
← previous page next page →