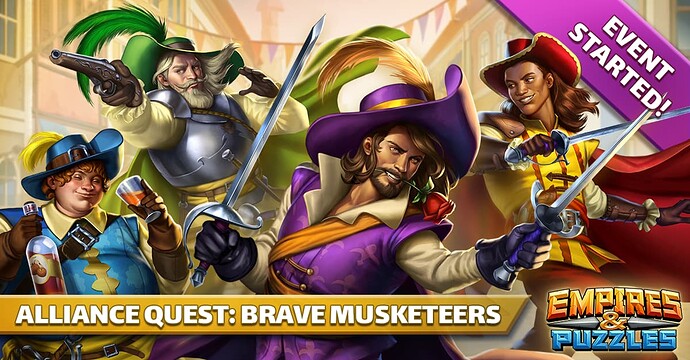 All for one and one for all: meet the Musketeers in Alliance Quest 2!

Earlier today, we learned that the difficulty level of the new Alliance Quest: Brave Musketeers event was accidentally set too high; even our most veteran players, many who love tackling tough challenges, were being unduly frustrated by the staggering difficulty of certain stages. This was not intended at all and we’ve been urgently working on a fix since this morning.

We have just deployed an emergency solution that will adjust the event’s difficulty to its originally intended level. The event should now be playable and enjoyable for the majority of players. (Note: you do not need to update your app to see these changes.) The duration of the event has not been modified — the event will still end at 2022-12-19, 07:00 UTC.

We would like to sincerely apologize to everyone affected, particularly to those skilled and determined players who still somehow found a way to clear all stages on the initial difficulty setting. Our hats go off to you.

We will continue to investigate the issue and will keep an eye on the event until it ends. Thank you always for your patience and understanding. Best of luck in the battles!

A small update from our end — we’re nearing the end of our investigation. While we’re still busy crunching some numbers, we believe we should now be able to provide adequate and commensurate compensation for those players who used a significant amount of valuable resources to clear stages on the original difficulty. It may take a little while for our servers to process everything, but you should receive something in your in-game inbox in a day or two at the very latest.

Our apologies once again for the inconvenience. Thank you for your patience and understanding!

Hello, we hope you had a great weekend. We have another update:

Due to a technical error, some players have yet to receive all of the valuable resources that they had used prior to the difficulty adjustment. We have managed to resolve the issue today and the missing resources are now being sent out. Please wait a little while for them to make it to your in-game inbox.

These Battle Items were not sent out at all last Friday, as at that time we were still not done with tracking down their use. We have managed to complete the task today, and the items will be sent out soon. Thank you again for your patience.

Unfortunately, we will not be able to return any used 1-star and 2-star Battle Items in this manner — we would absolutely do this if it were technically possible, but our systems currently do not track and record the use of lower-rarity Battle Items in a way that would allow us to make the queries necessary for this occasion. We are deeply sorry for this oversight and will look to improve for the future.

To avoid overloading our servers, the amount of items in all of our compensation packages had to be rounded to the nearest multiple of 5. Due to this, some players may ultimately receive 1–4 more (or less) items than they have used. We apologize for any inconvenience caused by this and would like to ask you for your understanding.

Once again, please wait for a day or two for our servers to process everything. In the meantime, we will continue to make sure that all players receive adequate and commensurate compensation. Our apologies for the extra delays involved. Thank you for your patience!

Last week, we were forced to make the difficult decision to adjust the difficulty of the Brave Musketeers event after it had gone live. For the past few days, our efforts were mostly focused on investigating the issue and making sure that all affected players were adequately compensated. Now that the dust has settled, we’d like to offer a more detailed apology and explanation for how and why this all happened.

As with all of our events, Alliance Quest: Brave Musketeers was tested in beta before making its debut on live servers. When the event was put to beta for testing, several of our beta players voiced their concerns about the event being too difficult. After the beta we decided to tune down most of the bosses. Data from our internal simulation tool showed that the event was on par with the first Alliance Quest (Clash of Knights).

Once players on live servers began playing the event, however, we realised that our simulations had let us down in this instance. Within the first few hours of play, it became apparent that the event was much more challenging than we had intended. The stats of the event enemies, their Special Skills, the damage reduction effects, and the counterattack granted every 3 turns all combined to magnify the difficulty of the event beyond our expectations.

While a determined minority of players still somehow managed to power through the event stages in their original form, we had to accept the reality that the event was simply too challenging, and therefore no fun, for the majority of our players. Faced with the prospect of the event staying almost unplayable for another three days, we weighed our options and determined that the lesser evil was to adjust the event’s difficulty while it was live, as undesirable as that may be.

On Thursday 15th December at 15:00 UTC, we made the following changes to the Brave Musketeers event:

Following this change, we carried out extensive investigation of our logs and used our analytics tools to gather as much data as possible about the resources players had used while playing the event before the adjustment was made.

Using this data, we have now completed donations to all players who participated in the event pre-adjustment. We were able to safely return most of the spent resources (save for 1-star and 2-star Battle Items — as we’ve mentioned and apologized for on Monday, our systems were not tracking and recording the use of lower-rarity Battle Items in a way that would allow us to have made the queries necessary for this occasion). The donations were processed in several batches on Friday 16th and Monday 19th December over many hours. Each item type was donated in a separate job, so affected players may have received multiple in-game messages containing returned items.

We know how upsetting and disappointing it must have been for those players who heroically powered through excruciatingly tough stages on the first day of the event, just to receive news of an emergency difficulty adjustment. We’re truly sorry for disrupting your plans mid-event and failing to meet your expectations. Please kindly understand that we chose to take these measures when we did to ensure that as many players as possible could have the opportunity to play the event at a reasonable difficulty level.

Looking to the future, we have already held internal retrospective discussions on why this happened and what we can learn from it. There is also analysis ongoing to identify how we can improve our processes and tools to more reliably produce well-balanced game content.

Finally, in the spirit of seasonal good will we are sending a gift to all players who were eligible to participate in the Brave Musketeers event to make up for not giving you the Alliance Quest experience we wanted for you. You will find this message in your in-game Inbox.

From all of us at Small Giant, we wish you happy holidays and a fun-filled 2023!