Do 3 chests a day, watch Mystic Visions, you will have at least 3 additional pulls on next Costume Chamber.

Yeah, I ment pulls from the event, not from the adds

Mana control would help with your Joon problem. I can see how Elradir wouldn’t.
Good job! And congratulations.

What card did you pull for all that work?

Do 3 chests a day, watch Mystic Visions, you will have at least 3 additional pulls on next Costume Chamber.

Yeah, I ment pulls from the event, not from the adds

A pull is a pull. This event is different from others that you don’t need to finish it to get free pulls from the portal. So its difficulty does not do so much harm to new players.

Elradir works against against Azlar DoT very well if I had an overhealer. But without having overhealers it was very tough to time Elradir as Joon would snipe him…

@Pompitous how about you? Hope you had some better luck with this portal!

I know it’s on me to pay better attention when reading the boards, but I saw: 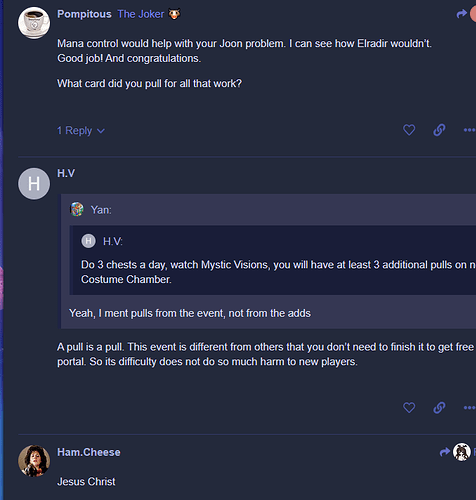 Pompitous, yup, i agree with you and i would have agreed with anyone who would have made a similar fact based post.

However, my big ‘crime’ in the eyes of sum seems to be that i do not accuse SG of doing everything they do out of greed (Of course they want to make money, they are a business - i merely object to the perpetual nastiness towards SG

I also don’t understand why Dyna finds it necessary to talk about me as he or she when my name is clearly feminine, much clearer than a name like Sleepyhead is.

Im all in favour of gender unspecific name, in this case though it was to hurt. Hmm, who belittled whom and if it was me, how did i do it other than by disagreeing.

But never mind, maybe we can all take away that tolerance is required from all sides. I, for one, am done with this topic

I also don’t understand why Dyna finds it necessary to talk about me as he or she when my name is clearly feminine, much clearer than a name like Sleepyhead is.

First of all, it wasn’t me. 2nd of all, the fact that you found someone using he/she so as not to use an incorrect pronoun is even more telling. 3rd of all, many have literally laid out the same reasoning as Pompitous and yet you drudged on with your “not any more difficult” until you didn’t. Comedy good. Thanks for the laughs.

I responded by name to your post, so if it hadnt been you, why not say so then.

3 i agreed with Pompitous because of battle items i used and most likely didnt use earlier on - this was not previously mentioned. Also, his entire post was cohesive and lacked that undercurrent of aggression of your post. That aside, i read only one other post by Pandita - apologies should i have mixed the 2 of you up.

I object to folks drawing conclusions ('have you seen what heroes she used) without knowing more. These heroes could have been my only heroes. And so on. And it doesnt matter.

I responded by name to your post, so if it hadnt been you, why not say so then.

Maybe figure out who it was instead of continuing to make more ridiculous claims that come very natural to you. Hope you resolve your issues. Best of luck whatever you are.

Yes I meant you.

I have played the Masquerade for years with differing heroes and found it always equally difficult or not difficult.

If that is true you either have started playing this game long before the Masquerade came out or you, like so many other people remember good things better than bad things.

.
If you dont have an overhealer or very strong maxed out newer heros I can understand that the new Masquerade becomes a pain.

I have the impression that the difficulty was raised a lot and unfortunately they didnt leave the rewards for the first 10 levels as it was.

If you remeber that originally the Maquerade was developed to improve S1 heros, they once said costumes would only be for S1 heros

, I find it a very bad idea to start raising the difficulty level with this event!

So over all from my point of view it was a bad move from SG and I understand that new and mid range players and ftp are not happy with it.

If you can stop them from firing, all you have to worry about are slash attacks which are once every 4 turns per hero (I think).

This is a very enlightening sentence!

It shows that you dont have to pay attention about how often slash attacks occur.
The time between slash attacks is variable and if you are unlucky this slashes can hurt quite badly.

Pompitous, i throw bomb and dragon attacks in whenever i just want to finish something. Works well - except for level 10 epic in Knights.

You clearly just like to fight to be offended by someone not assuming anthing and complimenting your name.

I will be sure to ignore you.

Cause this is completely distracting from the facts that the event was harder and should have a few more keys for its difficulty to not push the paywall too far away.

I believe most everyone finished it

nothing to be too proud of there

But some of your hero’s are really nice and I acknowledged that and then get smeared by your offense of nothing that I’m sorry for.

Being sorry for complimenting your hero’s and ever acknowledging your presence.

But if we could stay on topic instead of caring so much about our own selfs for like a few posts.

I believe everyone here cares about the game why else be here?

We asked for more keys in beta … maybe this will help when they read this.

The time between slash attacks is variable and if you are unlucky this slashes can hurt quite badly.

The fact is i don’t really pay too much attention on how often the slash attacks happened because it was not really an issue. I didn’t lose any heroes to slash attacks since i would simply use a healing potion if necessary, but even then i didn’t use many.

Good for you but this implements that your heros are so strong that you dont care about slash attacks which says a lot about your roster. which is again good for you!

On the other hand this gives me the impression that you belong to a minority of E&P players.

So… I had trouble with the last level of epic in the gargoyle challenge event… lost 5 times before I just used gems… so… let’s burn it all down because how dare something be overtly challenging… I’ll get the matches… ya’ll find the gasoline.

I used 3 4* and had no problem. But the 3 were Gullinbursti, GadeirusC. and Proteus.

Still I amacutely aware of slash attacks and if for once I am not one of my 4* dies.