Hi, I don’t know if it’s on purpose, but new Biome effect overwrites HOT. From my perspective if it’s working like this it’s not exactly positive effect on Dark heroes. 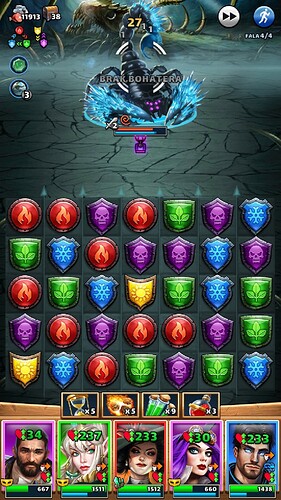 It working as intended, just don’t use Rigard.C lol. Well it’s the same symbol so it overwrites the special from your heroes, similar to other effect too (ex: +special attack buff overwrites Glenda’s buff, +50% attack overwrites Rigard.C attack buff … in others ss4 map stages.

Not a bug. This isn’t the first biome effect to overwrite a hero special.

Yes, but this one is very visible and making this biome effect rather negative than positive. So there is a negative effect for Holy and for Dark it’s something which combined with the popularity of HOT is also rather negative. In my opinion, as with S3 runes this one should stack.

I would say just live with it and don’t use Hot.
The first binome effect was the same overwriting the effect from miki, tarlak or BK with a far weaker effect.

The point of many of these mechanics is to force people to rethink their teams and use different heros.

It seems a lot of people want to just have one team for everything that is “optimized” in their eyes and have no interest in exploring other possibilities. How boring!

Agree with what many others have said - don’t use C.Rigard or any other HOT hero, unless they bring other effects that you think are more important.

I think the key here:
The Biome is Undispellable while Rigards’s buff is dispellable.

And in this game undispellable always overwrite dispellable.

Or, to be more clear: once the Biome special has triggered, which is undispellable, cRigard can’t overwrite. It’s not just the other way around.

(Or by another undispellable buff with a similar effect either, which you will see when the HoTM family bonuses will be turned on in the live game)

While the reason for the behavior in game is clear, I doubt the intent was to nerf HOT healers. In any event, they can fix this by changing the HOT from the location to be a separate but similar buff, very similar to the buff you get from getting rid of the Green immovable tiles in S3.