New Aethers are not shown in Inventory

I don’t know if that’s a bug or if I even care, but I was just curious about it,so maybe someone can enlighten me.

When you open the inventory you can normally see where you have gotten something new and how much with those little red numbers besides the categories.
But it seems that Aether are not taken for that. 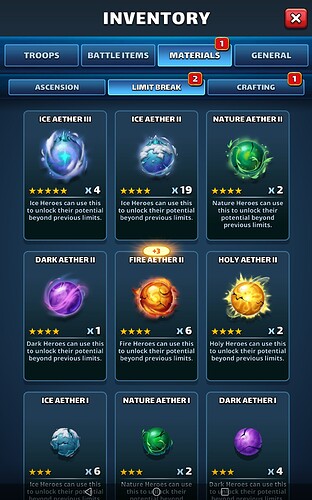 Where in inventory are the limit breakers/ aethers Bugs & Issues

It looks fine for me [image]

I’m borrowing this picture from @Ruskin505, here you can also see that it only says 10 new things in materials sub Inventar, but that’s the 10 things from ascension and crafting, it doesn’t show the Aethers.

So if someone only gets some Aethers as a reward and opens the inventory they aren’t shown anything new until they open the limit breaker sub inventory.

It’s certainly an intriguing issue, sadly I had checked to see how many aethers I got earlier, but my investigation showed up another anomaly that I wasn’t aware of. New Titan parts are not listed at all. In the example shown, only the hardwood lumber and the 2 compasses were listed… It had never occurred to me before but I do believe I will check next time whether I am actually given the items.
EDIT, I do realise these are 1 and 2 star items so why are they reported in the recent activity section that only shows 3 star items and above. 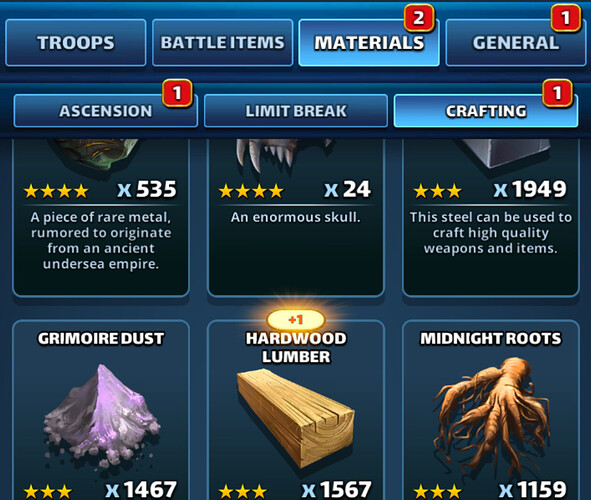 No idea why it shows the parts in recent activity. And I don’t think that 1* or 2* items show in the inventory, at least backpacks or something like that normally doesn’t show.

I understand now. It seems you have found an anomaly just like I did when I went looking…

I am having the same issue. The holly aethers did not show after completing the Omega challenge

This challenge was fire Aethers, not Holy.

No wonder o can’t find them!!!