I never thought he needed a nerf and still dont. I have agreed with a few in the past such as Liz when they didnt have a counter except to bring a couple of healers and now with KhuFU or tree in a VF 3* war as they just nerfed him.

Heroes that need a nerf are those who you cannot recover from if they go off if you dont have a special already line up. Even Alfrike in VF is beatable if she goes off a couple of times.

That’s just my point of view

i have more difficult to deal with Hulda than Xnophold in war matches. Hulda’s minion are driving me crazy. And if the logic to nerf a hero just because we are losing from them in this game, then for me, Hulda also need a nerf thread

Yeah well, that “subpar” heal is often more than enough to keep him alive to fire a second time when boards are bad. Did you also want him to cleanse or debuff on top of the mana boost and heal?

Of course he’s not unbeatable, I’ve taken down the squid many times. But people diminishing his impact on the game and defending him all out, while almost all top alliances use him as a tank are not being completely fair.

He’s an enabler and he’s the best there is at that, even better than Ludwig. He’s like the weapons dealer that stays out the picture bringing the big guns on express delivery.

Just to make it clear: I didn’t vote for a nerf, as I’ve been hit hard by nerfs as well and it sucks. And maybe I finally get to pull him one day…

There are heroes that nerf him directly: Rhys and Narsica… Just them being on the field. All you gotta do is pull. It’s unlikely Xnol will get touched so he will remain the best (arguable) tank until the next set of super tanks get released (we do need a meta refresh tbh).

He shouldnt give himself mana for a start. Then reduce his heal. Thats getting close to balanced for his speed. 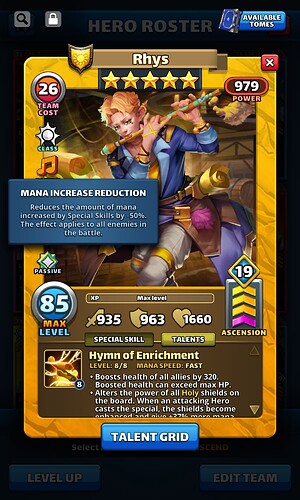 check the previous posts and see that he is not that hard to beat, even with a mono purple team and slow or very slow heroes.

Just laugh on your nerf idea because of using purple on him. Please, let him alone!

Yeah, I know. I’ve often used my purple very fast team against Xnol. Costumed Victor, Kageburado, Clarissa is my main purple vf team. If you have Khonshu, Hannah and even Sergei, this purple team can shine. 2 3-matchs make this team win very easily. But, how about there’s not enough shields there? You make one purple 3-match and then Xol fires. Now you need more than one another 3-match cause your purple tiles were already be weakended. This purple vf team is too risky.

9 purple shields can make your Xol-Ludwig-Alfrike team sweep them away, but can you complete 3 3-matches before enemy Xnol (20% mana bonus of 30th level magic troop + 4% mana bonus of emblem + and even 5% more mana bonus if there’s Rhys’ family bonus thing) fires?

Anyway, I don’t think nerfing Xol will happen. It can be too risky move for SG/Zinga, I think. it will make many players very upset.

The board was very good there. With most boards purple stacked teams would be suicide vs xnol tank

Do you talk about Hannah? Xno not have begin match mana add, and he is also Average speed.

No, i mean for a starting point for the nerf, not the start of the match.

What is SG waiting for to nerf Xnophold? Come on, I only see the same tank in every war, and in most of the raid defenses! He makes slow heroes OP like Khufu because they charge faster than they are supposed to charge and, to make things worst, xnophold delays the mana gain by purple tiles so purple doesn’t exist anymore in this game: there is no ponint in buying ascension mats for purple heroes, nobody wants to take purple heroes in SE, nobody has war attack teams with purple heroes, what are they waiting to nerf him? Costumed Sif , which is a newer hero , gives just 15% to three while xnophold, almost a year old, gives 20% to five.

How much do we have to wait for this game to be somethimg different than “bring 3 yellow heroes at least and pray for yellow tiles in the middle” ? I was so proud of my dark heroes and I barely use them in war or raids, this hero has ruined a whole colour, it should have been nerfed long ago!

If you choose to live in the top 100, that is probably true that Xnolphold is everywhere.

Right now I’m playing a bit more scaled back and it is significantly more diversified, still purple tanks but in a 19 VS 19 war I see:

You just need to play with a mix of players with different spending habits if you want diversity. Cause if Xnolphod gets nerfed or replaced with better its just someone else that will all be the same in the top. Before him it was Bera, before her Telluria, before her Ursena, before her my understanding was Gwen ruled the top.

But none of those tank heroes from the past have:
a) made a colour unuseful. In the current meta dark heroes are slower than they should be and, therefore, you don’t make teams around them. My dark heroes are waiting for action in a corner, just use them for some events, and only a couple of them, which is really boring.
b) made slow strong heroes to seem OP. Khufu is so present in defenses because of xnophold, that 20% mana gain is insane. Fast heroes attack just one turn after xnophold, slow heroes two turns after.

What are they waiting to analise the data and realise that the game has become a complete gambling since that hero is in defense?

It wont matter how many time we prove and talk about how to defeat a hero that people complain about, will be those that will keep complaining about it and find any excuse. I am done with all the crying and whining