Nerf is just a tool to increase sales

How’s W3K different from MT or any other event? They all have offers and portals with heroes unique to those portals? You get free stuff that you can stick with or have the option to purchase more chances at those heroes.
Unless you’re a big spender, you cannot influence any of the events. Spend or don’t spend, choice is yours. Every single for profit business out there is in place to make money. If you think you’re getting cheated somehow, then don’t spend money there.

The point of this thread is a good one. Even if you don’t think nerfs are intentional to then buff sales for new crew SG is giving that impression to a large group of players. I can understand some heroes getting past Small Giant since there are so many different skills and passives that can combine in unique ways but the Xmas ones were obvious. Small Giant needs to compensate the players affected by nerfs better. How are they not allowed to get their limit break stuff back?

do you get paid really well for defending all the crap the game is doing lately? Or is it the person behind this stupid policy that is ruining the once spectacular game?

do you get paid really well for defending all the crap the game is doing lately? Or is it the person behind this stupid policy that is ruining the once spectacular game?

Do you get paid to complain nonstop about how you can’t get an event hero from a couple of free pulls that you grind out? Is it someone else’s fault that they can spend more than you can to do more pulls and get more heroes than you? This is a business, not a charity. It’s not my fault I have the means to purchase more offers and turn them into pulls and get more 5s than you. Odds are the same for the both of us. The only difference is I do more pulls than you do, thus more chances of getting those 5s. In the end, it’s a business. Goal of a business is to make money. But please, tell me more about how you can’t get a Springvale 5* from your 6 pulls compared to my one 5* from 70 pulls now. Cheers.

Congratulations for having a lot to spend for nothing, I don’t, in this event I spent 25 gold chips and another 7 in the other event and nothing, but it’s a matter of accounts. for 3 years always completing events and never won an event hero in challenge event pull, the value paths I bought all, I bought the pack several times that gave 10 summons and 3000 gems and continuation of nothing.
Is it worth continuing to invest for nothing?
happy, this month with so many good comments your boss will give you a bonus.lol

I’m not going to comment anything else here, because when they put the admins to comment, that I’m not even sure who plays, it’s not worth commenting on what they don’t know.

Not only do you complain non stop about wanting free loyalty things, now you’re delving into conspiracy theories as well? You know, I feel sorry for you. Yes, SGG hired me as a spy to only say positive things about them. Hahahaha thanks for making me laugh.
You simply fail to realize that this game is a business that provides an entertainment product and if I am entertained I am going to spend money on it. If you can’t afford to spend money, enjoy the free side of it and quit complaining.

Is that you complaining in Portuguese now?

As for meta defenses, we’ve seen that since Telluria’s heyday.

LOL! So disconnected from reality. I guess that’s what happens when your own defense team consists of pre-historic heroes like Zimkitha and Clarissa and you raid against similar teams at 2100 cups. You don’t see fight the teams with C Alasie, Hulda, El Naddaha, C Kong, Xnolphod, Penolite, and the other dozen heroes who make up the top defense meta.

LOL! So disconnected from reality. I guess that’s what happens when your own defense team consists of pre-historic heroes like Zimkitha and Clarissa and you raid against similar teams at 2100 cups. You don’t see fight the teams with C Alasie, Hulda, El Naddaha, C Kong, Xnolphod, Penolite, and the other dozen heroes who make up the top defense meta.

A few older but recent ones.

So, what exactly is your point? Why don’t you show some of your screenshots? I doubt we would believe they’re yours though.

Edit: Oh, was this supposed to be a distraction from the fact that before you got Guardian Panther’s costume you were crying for a nerf? And now you have it, you don’t want it nerfed? I mean seriously, responding back to a post I made 3 months ago? 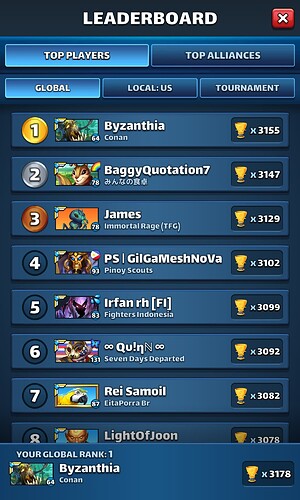 I posted another video today in 🦅 Kullervo – 5* Holy / Yellow from Legends of Kalevala of five random attacks, but you won’t believe that either. Probably a fake, right?

LOL, Zimkitha, Rigard, Malosi… yeah you’re really qualified to speak to anything after, oh, 2018. “There is no defense meta” was such a profoundly ignorant statement that it had to be called out.

So, you burned up a bunch of raid flasks, not all that impressive. I mean you’re back down to 2600 now. And without even trying I’ll get into the top 100. 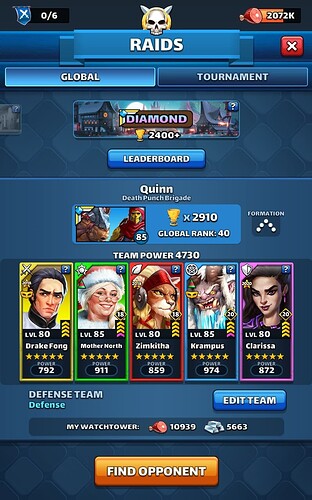 But I guess you do what you want considering you want to spend a lot of money and chase the latest heroes because you don’t know how to make use of the heroes you already have.

Oh, and BTW, if I can reach 40 with my “obselete” heroes, imagine what I can do with the latest and greatest.

Edit: Should add that a quick look at the video isn’t impressive. Am I supposed to be impressed? Because most of those defenses aren’t the top tier defenses that you said I don’t see.

Whatever. If your point is that I can’t comment because I don’t deal with high end defenses, well, I’ve pretty much shown that you are wrong. The fact that I don’t have the latest OP heroes to beat them must make one wonder why waste thousands of dollars and do no better than someone who spends no money.

Edit: And I don’t whine about nerfing heroes that I don’t have, you’re the big spender who keeps posting up nerf threads.

I think your comments have definitely hit a sore spot

He’s just sore that we’re calling him out for being a hypocrite: calling for a nerf on Guardian Panther’s costume when he didn’t have it. And then when he gets the costume, deletes his message supporting a nerf and now posting that we shouldn’t nerf the costume.
I mean who else would respond to a 3 month old topic? And thinking that my opinion doesn’t count beause he thinks I raid in platinum or gold.

Would you be so ind as to point me at those deleted message calling for a nerf?

To be perfectly clear, I don’t want her to be nerfed. I just find hysterical that you claimed she was completely broken a week ago, but now that you pulled her, she’s just ok on offense and “a joke” on defense. I particularly love your complete 180 on the c Lepus comparison. 7 days ago, she made him look like a joke, now they’re basically the same. Just perfect.

Come on, have some dignity please. I really hope you pull c Alasie soon. It’d en…

If you click back to this post, it will show the quote where he called for a nerf. If you follow back the quote, you will see he deleted it.

Went from “Not spending a dime on that portal” and a bunch of “nerf C-GP” comments to 800 pulls to get her (according to them) to quickly deleting his pro-nerf banter. Quite a funny storyline.