Need to be able to have more then 5 team rosters

We are able to attack in war 6 times so it is only right we should be able to save 6 teams not 5!! Kinda defeats the purpose of giving teams 6 chances 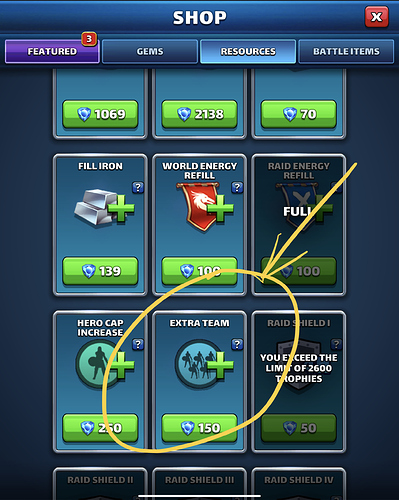 Additional team slots can be purchased in the Shop if you wish. You can also just level and use heroes for War without them being on a team.

This has also been suggested before in context of War many times, for example:

Considering that alliance wars let you attack six times, I find it kind of weird that the cutoff for saved teams is five. Having all six teams readily available would be much easier. The ability to favorite extra heroes is definitely helpful, but it would be cool to have at least 6 official teams, or maybe we could get an option to add or remove team slots.

I’ve seen requests to be able to specified saved teams for different functions (Titan Team, Raid Team, etc). This request is related, but slightly different. I wish I could save 6+ teams (instead of just 4) – primarily so I could lay out a full 6 teams for War. I’m ok with names Team 1, Team 2, et al. (Ideally, I’d love more than just 6 teams, so I could also save teams for other functions.) I do know how to lock heroes to insure I save them.

Thanks for considering. Sorry if this h…

One of the things that is bothering me is the fact that you can only set up five teams in your roster. The wars require you to have six teams. We need to be able to set up six or more teams in our rosters so we can strategize and work on war teams prior to the war.

Can we not have 6 slots for hero’s teams, as have 6hits with different hero’s in the war, as don’t knw wht troops your 6th team gose into war with

Please add a slot for a sixth team like you have for the first 5. You need 6 teams for war and it’s too easy to mix the ones you are leveling up with your fodder heroes. Especially while playing when tired.

Hi, In war we need 7 teams because we can use a team only once and have 6 rounds… Then, why just can assign 5 teams on list of heroes? That’s not useful. We need to assign 7 or more, for the teams that will be used on mission (the beginner mode, with 3 stars) Need at least 7 teams, 6 the most stars possible, and 1 more for a 3 stars team for the begginers mode. (Sorry about my english, is not my mother language)

We need the option of six teams because it is required to have that quantity in alliance wars. How do we use or view the sixth team if we can only make 5.

I’d like an increase to the number of teams to 8. 6 for Alliance Wars, 1 for Titans, and 1 for Defense.

As this thread is a duplicate, it will be closed.