Yes agreed Perseus would be my choice

For defense team i would go for richard. On raids i win mostly every fight against Perseus, but richard is maybe a 50 / 50 chance.

Depends on the rest of the enemy team

If you wait one month you could get the ice giant HOTM wich could be a better tank.
If you are not in a rush and want a “PvE” hero then you could go after Athena or King Arthur.

Between the two Richard is the better tank while Perseus is better while attacking.

I think it also depends on the rest of your roster, if you have more tanks or snipers.
That said, since you already have them both at 3-70 maybe going for Richard can pay off more, because a 3-70 attacker can often be used with profit if you can protect and charge him wisely, while a non maxed tank is just a non maxed tank 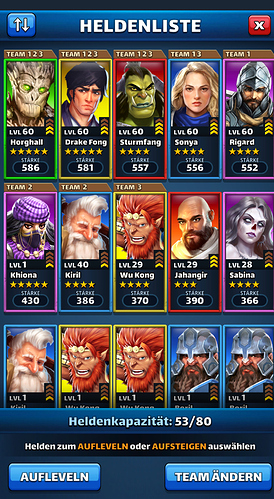 Perhaps you guys can share some thoughts with me

Whatever you do, build it with one of the wu’s
Khiona and boldtusk would add up a strong attack based team. Kiril for defense and as if you have no dd except khiona, take horghall with you.

Strategy would be work besser with fast hitter, cause with this team you gotta be quick. Caedmon would great in this combination. You could also exchange wu with drake for more constantly attacks.