Howdy guys, I could use some advice on who and how to put on my main team and in what order. Also setting up my defence team and war teams. Thanks Im only 3 weeks in so any advice would be greatly appreciated. 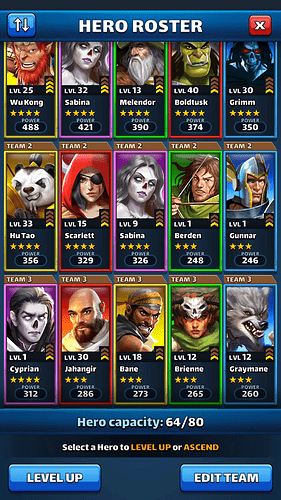 Focus on Wu Kong, Boldtusk, Grimm and maybe Melendor. Also do Bane to max level and Hu Tao to 3/60. These three yellows will get you through season 1, as the hardest “elite” stages in last provinces have purple enemies, and they should be enough to beat Dark Lord.

Bane, Sabina, Boldtusk, Melendor, Grimm as my priorities of the heroes I see.

Basically you have 5 4* heroes that are pretty good with progress, but Wu Kong is a detriment to going through levels until you hit a spot you can’t beat. He’s great for titans, and good when you are facing superior foes and need the help. He’s also not good on defense.

You’re new, so your War defense team should probably be your best heroes, and that first rainbow team you work on would be it. I’d go with Sabina-Boldtusk-Melendor-Grimm-Bane.

Agree with Zteev on most things, but would add that BT is a better tank than Mel

Thanks brudha, I didn’t prioritize Bane because he is 3* So Ty for enlightening me.

You gotta give some love to the 3* heroes… They’re faster to level than the 4* who need ascension materials to go to tier 4.

What is likely gonna happen is you’ll get your 4* to level 3.60, and then won’t be able to ascend them further. Unless you either:
a) spend money on the deals to get the ascension materials, or
b) wait a long time for the quests to come around

I’d personally just start leveling Bane, Brienne, Jahangir, and Gunnar, they’re gonna max faster which will give you more choices for heroes. What that gives you is the ability to stack the strong color against the enemies or bosses… i.e. when you put two heroes of the same color together their attack stats get added together and each match of that color deals more damage per hero.

Since you have no other purple 3* (unless it’s hidden below) then keep leveling Sabina, being a healer her level matters less since her special is just as effective at lvl 3.60 as it is at lvl 4.70.

Since 3* are the fastest to level, that will give you a selection of heroes to use much faster.

I’d n9ormally say to start by getting some 3* together

I’m still gonna say that. There should be no hurry to finish season 1 or, as @Zteev said, a raid defense team, as your cups are going to vary wildly for a while. What you do need to rush is a team that can access rare ascension materials (otherwise all those Boldtusks and Sabinas are going to get stuck at 3^60) and emblems. A 3^60 four-star better than a 3^50 three-star, sure, but it will take longer to get them there. Also, you won’t be able to use them in rare tier monthly challenge events, and you’ll have no depth behind them for wars. Finally, you can slap emblems on a maxed 3-star - if you want to - but not a four-star stuck at the mat wall.

You are showing 64 heroes total, but your screenshots only show a few of them. Every three-star I see is worth leveling except Graymane, and I even used him for a while on class quests and late war teams until I had better options. Give us the whole picture. Who have you got?

I think you have a very good roster of heroes for someone who has only played for 3 weeks. Best of luck to you!

And yes, I would also focus on Melendor, Sabina, Bane, Boldtusk and Grimm.

These are the rest of my 3*s 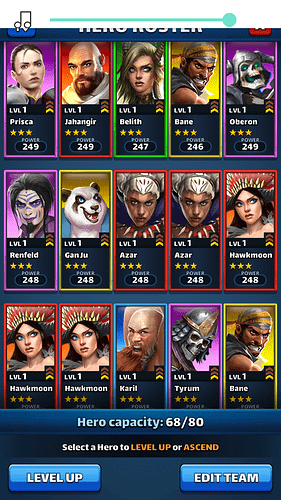 These are the rest of my 3*s

OK, you’ve got some pieces to work with here. For your first rainbow three-star team, I’d go:

Personally, I think you should have at least two rainbow three-star teams before worrying too much about your four-stars, but as was said, you have some great fours, so I understand if you deviate a little from the plan. Still, I’d recommend for your second team:

When you do get around to your fours, Boldtusk should be your red priority. Probably Sabina over Cyprian, since you can never have too many healer/dispellers. Melendor in green and Grimm in blue. Both are among the best four-stars in their color. Wu is not very good on defense, but is great for Titans. Hu Tao is limited by slow mana, but his special is quite good when it fires. Who knows who else you’ll have by that time, anyway. Also, at that point, I’d start to consider class more heavily. Which class trials are you weak in, and who can help with that? And, as you can see, there are lots of folks who would be happy to help when the time comes. I still post queries regularly to get other perspectives on things.

The other three-star purples you have aren’t generally very good.

Lol honestly, I wouldn’t even bother with those others.

Prisca and Renfeld only heal themselves. Prisca is ok for paladin class quests but Tyrum and Gunnar are way better options. There are many, many fighters that are also better options than Renfeld by a long mile, his attack is at least better than Prisca’s but overall his durability just sucks.

Oberon would be ok if you didn’t have Jahangir already, his attack is just mediocre and for a slow hero he doesn’t even deal that much damage for all that build-up.

I have all classic 3* heroes and Atlantis 3* myself, and I can tell you with full confidence even early game you won’t miss them.

Once Tyrum is done do Sabina, unless you get Balthazar or one of the Atlantis 3* purples (Chochin, Gill-Ra).

How does this look, team 1-4.
So level team 2 first then 3, 4, all the while putting stuff into my main as well?
And should I keep my main as war def team? 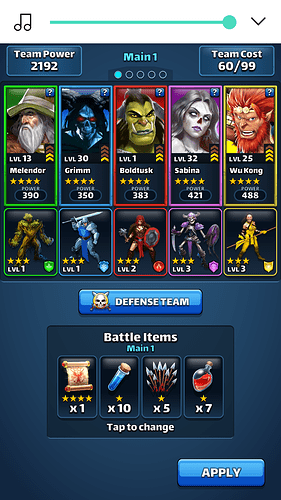 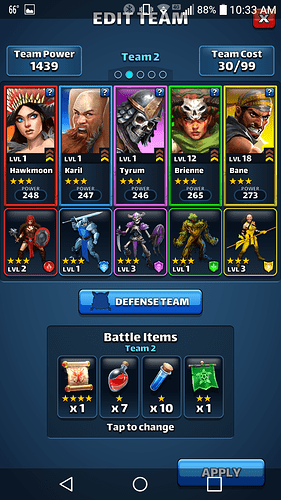 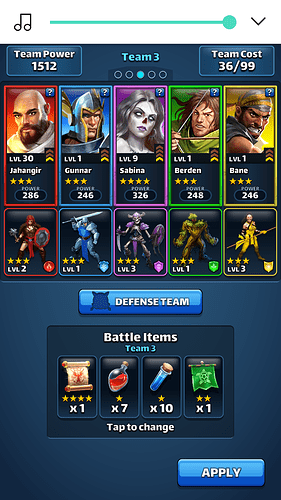 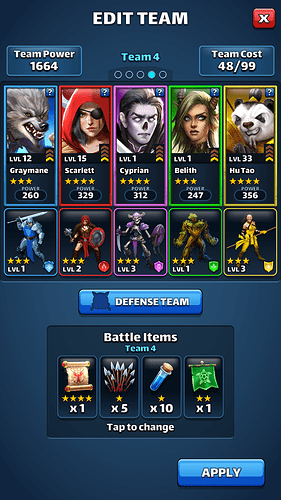 Yes, this looks like a good configuration to me. No need to do separate Sabinas on teams 1 and 3, though. If you’re going to work on Sabina, just start on the one that’s farthest along.

So level team 2 first then 3, 4, all the while putting stuff into my main as well?

My recommendation would be to work on one of each color hero at a time exclusively. That means, for example, all your red feeders go to Hawkmoon until you max her, then you move to Jahangir. I like to feed 10 at a time until the special skill is 8/8, then one at a time, since it doesn’t matter at that point. Yes, this means you’d be completely leaving your four-stars where they are until you max teams 2 and 3 (at which point, I’d circle back to team 1). Yes, that feels like it sucks really badly, but three-stars level relatively quickly, and you’ll be back to your main dudes and dudettes before your know it, with a decent bench behind them. Again, this bench will help in alliance wars, class quests, and rare tier challenge events, where your four-stars aren’t allowed. You can get some minor loot (mainly emblems) for completing the rare tier, and you’ll probably have a team that can complete rare tier in time for July’s challenge event. You definitely will not have a team of four-stars that can complete the epic tier by July unless you’ve had ridiculous luck pulling rare ascension materials. So, work on three-stars and get loot from rare, or work on four-stars and get no loot from either rare or epic. You don’t want to pass up chances for loot, especially emblems, which are kind of rare to start with.

The fact that you have such great heroes 3 weeks in may have skewed your perception of the pace of this game a little. It’s a marathon, and sometimes a slog. The good news is, you have a long-term plan to look forward to. I, for example, don’t know who my next red will be, because I don’t have any good options right now. You have a great road map for a couple of months, at least.

Also, I should have mentioned that your road map should be flexible as you acquire new heroes. If you were to get Valen, for instance, you want to prioritize him, since he’s the best 3-star blue, and one of the best 3-stars, period. If you haven’t gotten far with Karil, you might switch off him to Valen immediately. If you have gotten pretty far with Karil already, finish him, but then bump Gunnar off your “next to level” team in favor of Valen. Nashgar is another; if you draw him, I’d bump Jahangir.

And should I keep my main as war def team?

Just always put your best team out there for defense, whoever that happens to be, is my opinion. Once you get a deeper roster, you can play around with hero synergies.

That looks pretty good. As Noble_Weasel said, use the same Sabina in all your teams. There is no reason to ever have a lesser version of the same hero on a different team that you are using to do stuff.

You can edit team names, do that. Set up a team as your Titan team, and label it, like you did with your main team. Wu should be on it.

Personally, I have a team slot that I call “Priority” that I use so that the 5 heroes I’m leveling all show up together near the top of the list, I find it helps me find them.

Feed only on color, and for heroes needing specials to go up, try to feed them to the brink of leveling up, then feed 10 at a time.

I’d feed the duplicated 3* heroes one at a time to the identical hero - for the heroes you plan to use. So feed unleveled Hawkmoons to Hawkmoon, etc. That would consolidate you down to one Hawkmoon, one Bane, and one Jahanagir, but give you a much better chance of getting their specials up. Feed those duplicates one at a time, to increase the odds of getting multiple bumps.

So don’t keep any duplicates? Including my duplicate Sabina??

Keeping useful duplicates is fine, especially of 4* and above. The key word there is useful.

I can see wanting to keep 2 of certain 3*, like Bane. I doubt you will need multiple Jahangirs or Hawkmoons, ever. Plus 3* will flow fairly freely once you get your TC’s up.

If you want to feed only your third and above duplicates, that will still help. 3* heroes often don’t have a special at 8/8 by the time they max out, and you will get duplicated of them as you go, so you should feel okay about feeding extras to the exact same hero. Duplicates give a 25% chance of increasing special instead of the normal rate, which increases by max stars, and halves if off color.

I used fully ascended Mel, BT, Wu, Cyprian (essential against very strong bosses), Athena not fully ascend (u can use Grimm) on my way up until season 2 normal and still on doing the Season 2 hard. Of course with the help of green, blue and red vial. Im hoping this will help you in choosing your team.

I have never leveled Jahangir. Too many other red priorities.

I have two Hawkmoon for reflect green challenge events ( no Belith ) and alliance wars.

I have to say that this is the cleanest, well organized post I have EVER seen. Great job!