We managed to finish him to 4/80 recently, but cannot decide which Talent Grid pathway to go.

Looks like we will go Shield/Health to keep him alive, if we decided to use emblems on him.

As said above - defense first, health second, I have him max emblemed and LBd and that gives him the survivability to be an effective counter against the likes of Kullervo and other new ailment giving OP heroes.

As said above - defense first, health second, I have him max emblemed and LBd and that gives him the survivability to be an effective counter against the likes of Kullervo and other new ailment giving OP heroes.

Noted on this. Thanks for sharing.

He needs to be a little beefier for survivability to make use of his memory & a little extra damage cuz I have to think of what happens when there’s no ailments !!! 157% damage to all even at VF isn’t much. 200% or even 190% isn’t a huge increase but wud make him more useable.

So just accidentally pulled him.

Is putting together a team with mytzero and grazul a legitimate approach? Throw in someone like Matilda, or better to just use a 3-2 red/purple, or something else?

What type of tanks/defs does this work consistently well against?

Can pull a hero at 0.1% but not at 1.5% !!! Gotta luv that RNG gremlin !! Myztero needs extra damage for when there’s no ailments to memorise. He HAS to be fully emblemed & LB to stand any chance of survival cuz after all he needs to be hit by the ailments to memorise them so survivability is key !!!

Who are your best healers/support heroes? I can run some raids with grazul myztero and healers/matlida similar to yours. That will also show how many defenses he is viable against.

Healers I like and have emblemed are prof, diaochan, quartz, Ariel, grazul, all of the usual suspect 4s with costumes, annabelle and wooly. Also heimdall, cMN and nadezhda in the reviver category.

The 2 defenses i lost 2 i really should have rerolled - fully loaded w3k team (was hoping i could try out that shifting ma hero) and the one with the dark lord tank (this team doesnt do too well vs snipers).

Grazul is the weakest of the ailment blockers but is servicable. Mine is unemblemed though.

Edit… should have taken prof instead of ariel. Somehow missed that you had her

SO, got him yesterday… IT sais mystery family… 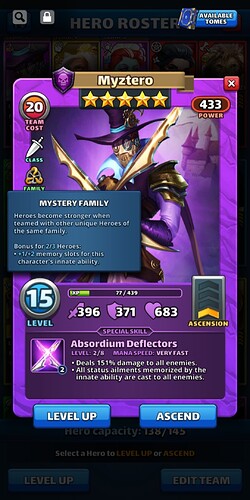 I have just added this Family bonus to the OP

I suppose if they did it for just 1x family member they might aswell just put an extra slot in his memory palace !!

Yeah wow, fascinating to watch. Thanks for that. It seems that a lot of the battles end up on the edge, but still very effective. Graz would work a lot better if she was modernised with a bigger heal or longer duration on the block.

It looks way more fun that most attacking set ups. I might start a level to 3/70 and then decide from there.

Funny that one of your attacks was against someone in my alliance. I will have to tell him he lost to mytzero …

Graz would work a lot better if she was modernised with a bigger heal or longer duration on the block.

Agree. I usually run Emilio and he is much more effective. I also normally do Prof Z and Arco which really helps with survivability (those 2 actually go with me on every raid regardless of the opponent)

It looks way more fun that most attacking set ups.

I might start a level to 3/70 and then decide from there.

You definitely should for him, and really for most heroes that are not no-brainers (e.g. Ludwig). Note that if you do like the style of play with him then I would recommend fully embleming him and LBing him so that he has the survivability he needs against most defenses. His attack heavy built is not well suited for him.

I’ll do another run in some time and see if I can get a different set of opponents to fight against. As has been mentioned he is niche which means that he will bring maximum value against specific defenses/heroes.

Another set of 6 raids - really happy with this one, 6/6 with some decent and some pretty top-tier defenses. The 5th battle (@19:50) was quite epic, but you will need a full 10 minutes if you want to watch it. Cleopatra sure is a ridiculous support hero.

Its kinda sad how forgotten this hero become. As a super rare one is outdated almost in every aspect. Low base stats, with wrong order of skill of his special

He needs better stats & an increase to his damage dealing for when there’s no ailments cuz he hits mega weak !!!

After watching your vid. Homalclease I was feeling gutted I chose Quenelle over Zuri in the SE especially since I pulled Quennell ‘THE VERY NEXT COK’ so after watching your vid I decided to grab a couple of CF tokens & guess who popped up? Yep, u guessed it, Zuri !!! So happy I have her cuz I felt I had made the wrong decision in the SE !!!

For one of the rarest heroes in the game, this poor guy should do at least 250% damage. And another 30% for each status ailment memorized. Plus much better stats.