Look at the emblems and total TP…my goodness. 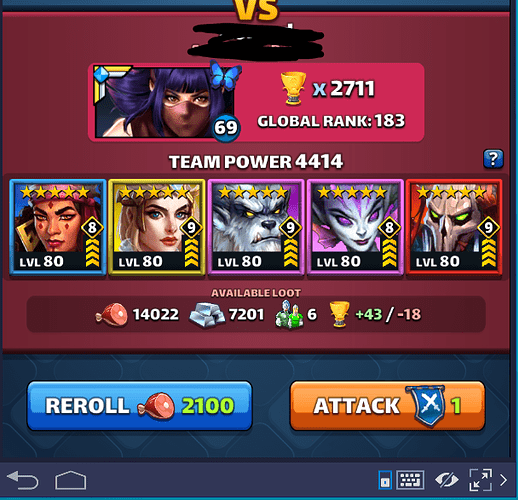 Did you win the raid? Also what level are the troops they are using?

I wouldn’t have expected anything less 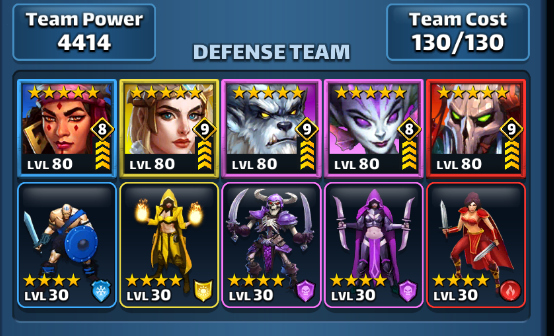 I only tried once, and unfortunately Boss Wolf got his shot off before I killed him. The board was such that I had to commit tile suicide for much of my team against his reflect - and lost.

But you run into that and you have to try at least once, right?

haha good stuff for trying nonetheless, tbh I don’t know how you take down Boss Wolf without having to bring a lot of yellow, and it doesn’t help that there’s no yellow dispellers (yet).

Not to mention Ursena is there to back up the team in case he fails, just eww, this team looks so hard to take down.

Except for Misandra, that’s one ■■■■■■■ scary team. So many emblems. I applaud you for trying. I would’ve run away lol.

Boss Wolf without having to bring a lot of yellow, and it doesn’t help that there’s no yellow dispellers (yet).

I brought in 4 yellows (Poseidon, Drake, Onatel, Joon) and Kunch (no yellow all team healer on my roster). If I had a good healer dispeller I would have gone with that, but only 4 stars in that category.

I figured against that team heavy color stacking was the only way to go. In retrospect using Guin instead of Kunch might have allowed me to kill BW before he fired…and Onatel and Guin could have really made it much harder for the rest of the heroes to do anything. I’ll try that if I run into that team again.

Playstation level…wow!
Reaching level 20 troop is quite a tough task for most but here you saw 2 level 30 4 * troops.

I actually successfully revenge raided a team above 4400 once.

Not bragging, I’m not particularly skilled, and my TP is just below 3600. Full credit goes to Wu Kong and the massive tile combo cascade that followed. It was a beautiful sight to behold. And the 59 trophies I got as a result were pretty nifty too.

Just raided someone in that range today with a lower powered team, one flag with a very lucky board. 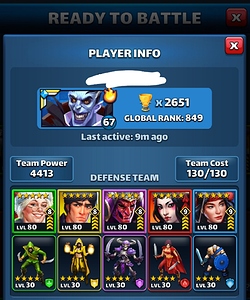 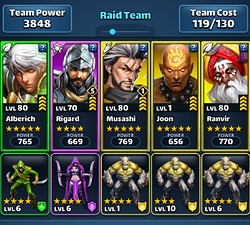 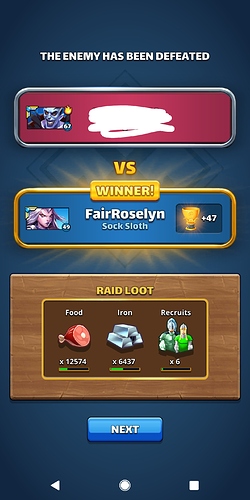 What’s the highest powered team you’ve seen? Is there a select 5* team combination higher than anything else? Emblems etc included do we know the ceiling point of power for the top team, just curious tbh.

I am barely at 3700, but without troops, higher tier fully emblemed 5* (HoTM, Atlantis, Event) should be at around 870, so that is already 4350. Fully leveled 4* troops add at average 0.1725 of stats. So 4350 x 1.1725 ~ 5100, but that is theoretical limit and I don’t know the correct application of the troop bonus to TP. Anyway don’t expect anyone to come even close to that limit, given that fully embleming 5* and leveling troops is insanely hard and time consuming.

@Alberto1 has a nice emblemed team.

Emblems etc included do we know the ceiling point of power for the top team, just curious tbh.

Currently you can see biggest players in 7DD & Aggressive alliance there are a lot of them over 4400tp but biggest are around 4430tp.

One guy even emblemed Kage to 12

Thank you for the link