Mok-arr needs to be rethought

This is my anti-Aegir non-green, non-blue war team and it works great, even if it’s not a mono team: 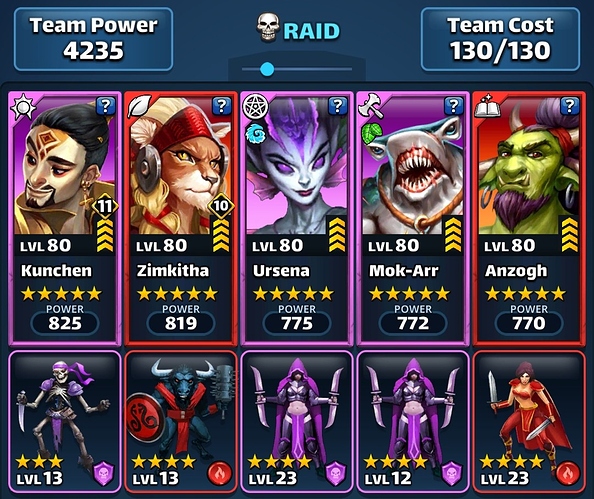 Obviously, I wouldn’t mind if they would buff him

Hi @all,
After playing for 2 years I was able to get a 5 star purple hero with one pull. Unfortunately I got this Mok Arr. Now when I am scanning briefly through the comments do I understand it correctly that this is the most useless 5 star hero that is currently existing?

Here’s a suggestion to make Mok no mo’ Joke! :

(I.e. instead of hurting everyone on his team he just hurts himself. A little extra than current)

I don’t mind him, my mok is waiting at 3/60 and I use him with Inari (fully levelled) and if you fire in Inari first then mok her special takes care of Mok’s special.

@Jeff3co sounds good for people who has Inari. I don’t have her but the core issue is not solved with partially hero.

What has to be done in order to propose a buff on this hero? Maybe if enough people will complain as on Aegir the developers will change the skill set.

I think that a lot of the hate for Mok-Arr comes from reading the card. It sounds horrible: 80% damage for your team. In practice, his damage to your own team is minimal, especially if you have defense boosts (here Wilbur is gold), but even without them, it is manageable. I have him at like 2/40 or so (drew Sartana, who cut in line…) and he enables me to finish the Fighter-Barbarian trials with minimal items (paired with two Grimms, Rudolph and Little John). I believe he did 30-60 to my team and over 300 to the enemies, but can’t swear to the numbers. I will probably take him to 3/70 at some point, though he may not get tabards unless I hit a really dry spell (and actually have the tabards to spend).

He is in the game for more than a year now. This topic and others exist since then saying that he is a bad hero as he is. Yeah I understand you wanted to create an interesting hero with unique skill and role, but this way he is simply bad. His role is very niche (purple mono) and its further limited by his dmg to allies and extra dmg to yellow allies as well, and further limited by his inability to hit purples. For a hero whose use is limited so much i expect to pack a serious punch in his role. But he does not. He can do nothing very powerful and has absolutely no team synergy. He does not support if i use him in his role, he punishes if i dont. Most who have him do not even bother leveling him the others leave him at 3/70. You created a hero that does not worth fully ascending according to most of the players. More than a year passed and you still did not so anything. Pls SG do something about him, and while you are there fix Atomos as well. Those 2 are simply ridiculously bad compared to the other atlantis 5*s.

I just pulled him and will take him to 70 and see what happens. Got Sartana Quintus Obakhan already there so he will probably have to wait.

I don’t mind sacrificing a hero or 2 to destroy an opponent!

agreed but I think he can be fun.

Fun? Ok there are heroes who fit in this category, but none of them are S2 5s. Make him a 4 like Danzaburo. You pull him relatively easily and you can decide if you want to keep him or not, level him or not. But not as a S2 5*. A lot of people spent serious bucks to pull a S2 5*, many players will never get one, or only get a few. Imagine those players getting him instead of any other S2 hero (yeah i know, Atomos)

he’s actually my 1st S2 5* I have pulled. You just made me realize that. haha.

I get what your saying and he isn’t optimal or good by any means…But it is what it is.

He was my first S2 5*s as well. Im not mad either, i just see him as a terribly missed opportunity to make an interesting and useful hero and it is border line cheating to put him in the same category as Kage, Ursena, Tarlak, Ariel or Poseidon. He is nowhere near that.

That is a very fair assessment.

He was my first S2 5* pull as well, and I’m not angry either. It does feel a bit as if I were “cheated”, tho. It feels like my chance to get a 5* hero was “wasted” on him. Much like my very first 5* hero. I saved gems and spent a little money to get 2600 gems and do an Elemental 10-pull. I got my 5*: Quintus. At first I was thrilled. Then I came here and did a search. The first thread I found used him as an example as the worst 5* hero and one that mats would be wasted on. That was a year and a half ago, and he still sits on my bench unleveled. As does Mok-Arr.

On difference: As I now have several good and fully ascended dark 5* hero’s, if I ever get to the point that I have tabards to spare, I would consider using them on Mok-Arr as he might be good/fun in a dark mono. I just don’t see myself ever ascending Quintus.

I am actually debating on Quintus and Mok-Arr for tabbards now.

I do have Sartana at 70 so it should be a no brainer. However, I might go for one of the above for either fun or a killer sorcerer which I lack.

I have a deep enough arsenal that leaving Sartana at 79 wouldn’t hurt me. She would most likely be war and/or titan worthy.

I think Mok-Arr could work well in a corner and go off at just the right time. I don’t have a problem sacrificing a hero or 2 to slaughter a few. I do it now for riptose if I need to.

Just did a thirty AR pull… mainly feeders plus my one highlight Mok-arr, meh, so disappointed, please review him and improve him he’s just unusable imho.

How does it work to get attention from SG in order to oush für a buff? I mean I see the same situation here as by Aegir. Maybe some Moderator can support?
@Kerridoc @Rook can you support here?

Mok does look really terrible, and for probably 99% of situations, he is. But (playing devil’s advocate) I don’t think he’s necessarily 100% unusable. I’d definitely utilize him in a mono purple team.

I know, I know, mono purple is usually a really bad idea for raids, titans, etc. But potentially devastating in an Alliance War vs. a yellowish defense team.

That being said, is it worth it to spend all those mats ascending one hero just to potentially use it for one mono team in an Alliance War… ? Probably not. Unless you already have like 57 tabards just sitting around with nobody to wear them. In which case… sure, go for it. Could be fun!