Mok-arr needs to be rethought

If you use Tiburtus then it means your level is not very high. I mean you do not have deep bench. And that means you are limited with purple 5* heroes. For example I have Sartana, Victor, Hel, Kageburado, 2 Seshats, Kunchen and Marie-Theresa maxed. Am I going to max Mokk-Ar? No, better to max another Kageburado, Hel, Victor, Kunchen and some other 5* purple heroes.
Mokk-Ar is ok if you do not have other options. If you have then Mokk-Ar is in the end of the list.

I have 5 Mok-Arrs sigh (pulled 3 when he wasn’t featured), so theoretically, I could run an all Mok-Arr team. I have 1 at 3-70 and the others are at 1-1. Not that I would spend 16 more trap tools on the others, but that would be interesting to watch

. As for his usefulness, I haven’t found one. I tried him in a 3-2 with grave and wilbur and that underwhelmed me. I only run mono-purple vs titans, but I do run a 4-1 in war so I suppose if a team had yellow wings, I could try it. He’s just too niche to be useful

He will get tabbards before Sartana, Quintus, and Obakhan…

I’d rather have variety. Sure he probably won’t get a ton of use but I will have fun trying to find the perfect team to run with him.

When I finally get him maxed I am going to try raiding with him. I think it’ll be fun and a good challange.

With my other options they wouldn’t be so fun. I don’t have anywhere for Sartana, Quintus, or Obakhan to go. Actually before I drew Mok-Arr, Quintus was gonna get maxed. I wanted to play around with him with emblems and the delay added to his mack truck.

I finished him and have been raiding with this team…

Seshat isn’t perfect there for her dispell but she is a threat. I can time her special and use the lil minions.

It’s been working out ok. It is quite fun though so I will take it.

Please seek imput from others. Mok-Arr needs better special powers for a 5* hero. Damage to own team to much.

Fair but it isn’t a ton and if you use him right he is quite devastating. Try him out, don’t just base it on his special.

I can’t remember/find if I’ve post on this thread before or not, so here goes… as I’m F2P I’m really quite happy getting any 5 star, I got “lucky” and pulled a Mok a few months ago. That being said I only took him to 2.60 then I pulled an Obakan, and another Obakan, I was told to level fast mana heroes in priority, so Obakan #1 got my first set of tabards, However I plan to max Mok with my next set.

REASON. Mok and Obi are both barbarians, and bleed damage occurs more often than you would think, and it STACKS. With just Obakan I’ve seen bleed damage stack up to around 700 per turn on a titan, soooo throw in another hero with that same chance , and who knows maybe I’ll get it up to 1400. despite all the hate the shark king gets. I still like him and am happy I’ve pulled him. Cheers.

You will have fun with Mok man. He is better than people think. Just have to think more when making a team with him. I am raiding quite often with the team I posted above and have a pretty high win rate.

Actually I took Wilbur out because someone asked how he worked without. So I have Kadlein there now.

Timed right firing Kunchen, Mok and the Kad you do some serious damage.

Here are a coouple vids I made using him. Maybe some ideas for you down the line. 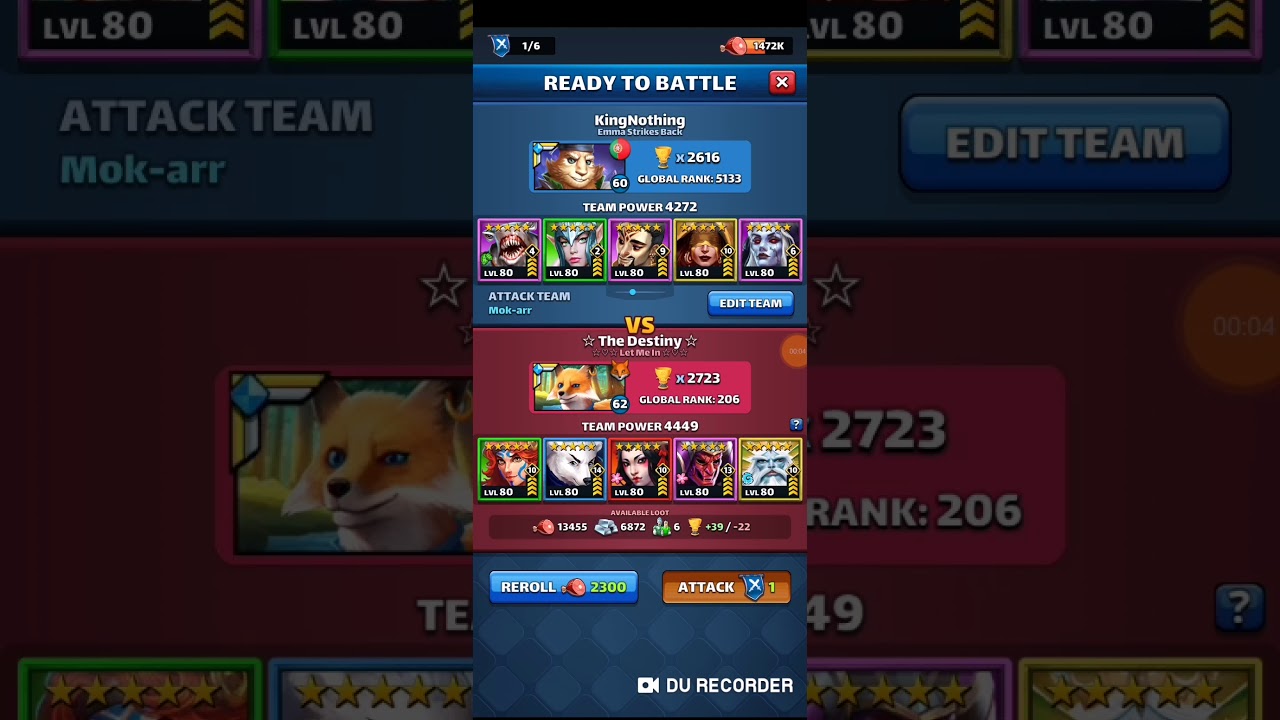 Youre out of your mind if you think Miki is a comparision. Titans and offensively, she or he is awesome and if you think that the silence isnt usable, well I’d have to say that Proteus and Hel are pretty useless also with their no mana regeneration. Mok-arr sucks though

I want one! As you say people look at the negative on him use what’s in your squad! Sure there others that could be better! Has good attack def n health against holy his mental! Put a few buffs on that tide of doom! Extra special

Yeah I agree this part is overblown. The damage is very minor to his allies, even the holy ones don’t take much.

The real problem with Mok-Arr is that he doesn’t hit dark. That is the main reason why he’s not used for defense teams. On offense you can play around that with other heroes though and I agree, he has his uses.

This may already have been thought of but I attempted to be creative with this one? I tried to balance it well but maybe its not?

I advocated in my beta application for buffs to a few heroes
Mok-Arr: swap mana to fast speed
Atk 601
Def: 736
HP: 1340
Deals 250% damage to all enemies
Deals 400 damage to all allies over 4 turns this effect stacks with other similar effects. This effect is undispellable.
Deals 100% extra damage against Holy enemies.
All Dark allies and enemies are immune to this attack.

Why would you do 400 damage to yourself with no additional beneficial effects? Wouldn’t he be more unplayable than this mok arr?

So for a couple reasons the 1st is 250% damage to all at fast speed is insane. Also in and all mono team of purple there is no damage so the 400 is situational. Especially since you have the opportunity to bring a hero that does HoT to mitigate any damage done.

I mean if it was 200 instead would it change your mind?

I think it’s reasonable when compared to the Ursula package. Which. Is probably more an indication that Ursula is OP than anything.

Mom-Arr would be fine with a 40-60% damage buff. Could even add that to the allies damage thing since he’s generally raiding with purples anyway