Mitsuko vs Jean-Francois.. who gets the rings?

As per the question…

I did a 100x pulls just for Jean-Francois… and I managed to get him. Really want him before but then after some… gazing on his card I kinda felt he is not worth that much now.

I have Vela at +10 now doing a combine damage to all (initial plus DoT) at around 400 plus minus (usually less than that but above 300 region).

The other differences with Jean-Francois apart from their element is Jean has no initial damage and instead of Vela’s 4 turns… Jean took only 2 turns to realize his full potential damage of around 300+ as well.

I think Vela is great…but that is because (probably) I don’t have any other Blue apart from Miki.

What about Jean-Francois?
The other candidate for Mystic Rings is Mitsuko.

The easy answer here would be to bring both of them to 3/70 first… but with the limited resources of feeders I have right now… I don’t feel like bringing both to 3/70.

It’s either one of them… from 1/1 all the way to 4/80. If its one of them than I can accomplished this before tomorrow.

For some reason despite the initial bombastic and ecstatic feel I have about Jean-Francois… it had sort of disappear now. I don’t really need the utilities Jean-Francois has to offer apart from his Critical element link. What I am looking for is the offense aspect but it has been nerf.

But Mitsuko ain’t a damage dealer as well.

So… Mitsuko and Jean-Francois. Who gets the mats? Main uses are for Offense.

p.s: I sort of pissed with myself and SG after making the 100x pulls lol. My choice… what can I say. This is the second time since Kingston. I will make sure this will be the last time I am spending in this game. The total cost to get both Vela and Kingston can easily build a full mid-power PC playing Cyberpunk 2077 at High Setting.

Its very hard to control and stop spending in this game.

Personally I would go JF.

On defence, mitsuko is really only a tank… Anywhere else and she doesn’t entice you to use a heavy blue stack… And as you said, her damage is pretty meh for a flank.
JF on the other hand is very strong on flank (beta experience). The fast mana is in keeping with the typical defence advice and his powerful DoT greatly weakens the enemy team for your other heroes. The defence buffs are also really well suited to a defence team.

In offence, as you noted JF brings more damage to the table than mitsuko does. Plus I believe he’s of a faster mana speed than Mitsuko…

Finally as you noted, the elemental link for a crit buff. Makes him good for titans coupled with a better attack stat than mitsuko.

One other consideration is obviously emblems. Mitsuko is sorcerer vs. JF at wizard… Just something to consider.

Thanks for the speedy reply @Guvnor

Emblem is an issue because right now Sorcerers’ are being used on Ursena where as Wizard’s on Onatel.

But your other points make a lot of sense to me. I’m lazy to think too much about this lol… I’ll just follow your advice and pointers and go for Jean-Francois.

Ursena tank with JF flank would be fearsome indeed!

Haa… didn’t think of this before. Never though Jean has a tank like stats. Onatel is well known… but I’ll give this a try and see how my Defense team do in days to come once JF is at 4/80.

Finley on other flank and you can skip 90% starting boards as an attacker, needs a lot of Hansels against this horror

Hi, I was looking for some thoughts and advice on JF myself as well, thank you much 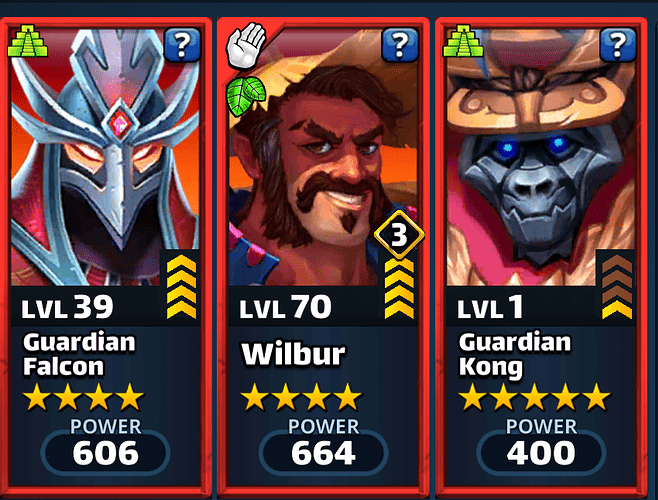 My combo red for offense

I don’t have any experience with JF yet, but I’ve faced a few defenses featuring Gravemaker and Vela flanks, and having them both fire the same time is absolutely miserable for the attacker. I was shocked the first time I saw how much damage the stacked ailments can do, and it puts a ton of pressure on you to cleanse really quickly.

p.s: I sort of pissed with myself and SG after making the 100x pulls lol. My choice… what can I say.

Its very hard to control and stop spending in this game.

Like you said, it’s your choice. I’ve certainly been there myself and had some regret, but overall I enjoy the game quite a lot so it’s not the worst way I’ve spent money.

My only advice is to try to delay gratification a bit with summons. You did 100 summons trying to get JF when the only other hero you could get is a S1, but we have Avalon, Costume event, and Atlantis (/w good featured heroes) to look forward to. If you summon in those too you might end up with like 5 JFs which is kind of useless. More efficient to just wait for a good event to target the HOTM and have a chance at other unique heroes as well.

What? I liked you until now… booo
May Onatel strike you down!

And the other major benefit Mitsuko is her relfect to blue special skill, while ofense is not AI, Mitsuko is the best counter against Finley and other blue sniper/hitter.

IMO, in my case JF is for tank defense (I will replace my Anzogh tank if I can get JF this month), and Mitsuko is better for ofense.

Iv had a maxed Mitsuko since her release and I have been very happy with her. I dont think I would take JF over her.

On offense, she is double damage if your opponent is using a blue hero that has a damage attack. With a lvl 23 mana troop, I can practically ignore Alasi, Athena, Magni, etc and rest knowing they are going to kill themselves.

On defense, Mitsuko and Guin flank Boss Wolf which destroys anyone without a good starting board. I see a few war attacks that score 0.

I already gave 6 rings to Mitsy, but the next set of rings definitely will go to Mr. Fireball.

I agree. And besides having mana cut and reflecting special skills she also has instant damage, which is good for events, where you have to be fast (if you want to gather further ascention material). And instant damage cannot be cleansed…

I would level mitsuko (also shares family Bonus with kage). Unfortunately didnt get her in November.

More efficient to just wait for a good event to target the HOTM and have a chance at other unique heroes as well.

Exactly what I was getting at in the main JF thread. Why blow tokens when they can only get you standard food? I got three Velas last month, in various events; I was actually crossing my fingers during Atlantis that she wouldn’t drop again! (She didn’t, and I got Poseidon, so all was good. Except for not getting Zeline

Mitsuko is the one hero that I regret maxing…she is only really useful against defenses with blue attackers on the flanks or wings. She is VERY meh for all other scenarios. I have her at +9 emblems and have had enough to bring her to +10 for a while now, but I’m going to strip her and load up Morgan instead. She’s just very underwhelming. Go with JF in my opinion.

Agree, Onatel is a turd. She is one of the worst HOTM from last year, just above Margaret and Grimble.

So if you were looking at combinations for defence, I would say that Ursena & JF combo is the better option thus JF should get the emblems…

Wasn’t saying anything about Onatel being trash!

I personally love my Onatel. Goes in every Yellow-Stack Raid I do!

Pick JF first for reasons below
You can use him everywhere from farming cause he damages the all stack , in raid offense and defense its buff and damages are usefull everywhere, to titan he has a decent attack to stack.

Mitsuko is desirable in a deep bench for war or to counter finley but JF do it so.

By the way if you consider raids only, JF counter more heroes than Mitsuko.

Wow. Onatel a turd? You’re the only person I’ve heard with that strong a negative opinion of her. She’s quite strong imo. Wish I had her. I have 9 darts waiting for a yellow worth ascending. Wanted her or Neith quite bad. Sitting on Musashi, Ranvir and Justice and not keen to ascend any of them.