This could be an Apple issue, but I believe the community needs to be aware of this to prevent mistaken purchases:

Previously whenever I’ve purchased anything from the game on iOS I received this prompt stating the dollar amount and confirming the purchase with both a double-click and FaceID needed for puchase, like this: 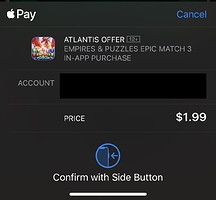 Recently- starting with either an iOS update or E&P v31 update, iOS now allows the initial purchase via a standard “Sign in with Apple ID” below without confirmation that a purchase is being made: 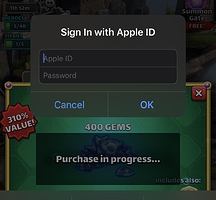 Yes, it fully executes the transaction after entering credentials and does not state the price or use FaceID to confirm the first purchase as presented on the first image above. Subsequent purchases beyond the first one do trigger the correct prompt in first image, so perhaps it’s something relating to a timeout of the Apple ID that bypasses the normal purchase screen.

If you are purposely trying to execute a purchase as I was in the example above, that’s maybe ok…but yesterday when I opened the game on my alt account (near-FTP) I received the “Sign in with Apple ID” prompt at splash screen (before entering the game). I clicked Cancel and the game exited. I tried a second time and again it presented the same prompt. I entered my information not thinking it was anything unusual beside GameCenter needing a check-in and immediately got a confirmation that I could claim the “Mountain of Gems” 10000 gem purchase (!?!), which I never purchased. When I picked my jaw up off the floor I contacted SGG who probably thought I was just sloppy or a nutter and politely pointed me to Apple while still noting their policy of non-refundability of purchases. But ultimately it does appear Apple will be refunding me for this mistaken/bug related purchase.

But—If SGG can do anything to ensure the first prompt always occurs and prevent any purchases without the item and amount of the purchase being stated that would be good. Then again, I suspect they might not have any control over it. So buyer (or non-buyer) beware!

And you are complaining about auto authorised payments. I make sure every transaction i make was made with my specific key entry. Why don’t others do this?