I finished the level 4,5,6 easy and hard and the mission counter is 0 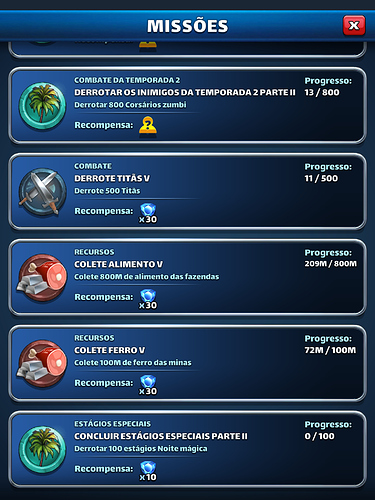 You need to complete the special stages of Season 2, 100 times to get this reward.

Did you finish those provinces before or after you received this mission?

GI only saw this mission yesterday. I don’t know when it appeared. I supposed that was when 4,5,6 were released

My suspicion is that you received this mission upon the completion of the poison mist mission, and that happened after your completion of provinces 4, 5, 6.

Do you recall when you completed the poison mist mission?

I have this aswell.
Indeed a bug because it was only releases after some other special stages series.
However i completed atlantis on normal and i’m in 18 on hard, so there are only 7 stages left for me as magical night. So I Will never reach this reward?!

Issue is that it Should pop up earlier and take Already into account the normal stages.

so there are only 7 stages left for me as magical night. So I Will never reach this reward?!

You can replay levels whenever you want?!

It seems strange to replay these levels, but i can give it a try

I would do that during Atlantis Rising because of less world energy needed.