You must not use her much, she is fantastic and highly thought of…the ability to do 310% multiple times and giving mana to all for each attack is unique and extremely valuable

That is exactly why I have had it for 3/70 for a year and a half, its abilities are not worth 6 telescopes.

Misandra doesn’t deal full dmg to additional enemies. She deals minor dmg, which I believe is 1/2 of 310%. So 155% dmg per each additional hit. Her card says: “Additional hits deal minor dmg.”

I still think that almost does the trick. At 3/70 she hits more than 1 enemy more often. I would like to see her guaranteed to hit a 2nd and 3rd enemy…then she will be worth the mats.

I have her at +18 and really love her. Her Mana bump is especially great with debuffing ice heroes who are average (like Frida, Grimm, Athena, or even costumed Isarnia). My general ice hero stack strategy is to fire Misandra, who then hopefully finishes filling Frida, who can then debuff before I use a second sniper, all in the same round. This generally results in at least 1 dead hero and 2 more who are almost dead and debuffed. She’s also tankier than most other snipers and the fighter class is great. She’s definitely one of my favorites and a hero who particularly shines with emblems.

One other useful aspect I’ve discovered is her ability to finish off multiple weakened enemies. True snipers like Alasie hit harder, but towards the end of fights, those huge hits are often overkill. I’ve had Misandra hit 2-3 enemies and kill them all to finish fights many times. That’s something very few fast heroes can do and makes her kind of a hybrid between snipers and AE.

I completely Agree ! I think she is definitely underrated. I have her on my five star team with costumed isarnia and they make a killer combination. Thinking of switching out isarnia for athena to see if it would make a more powerful blue combination since it takes isarnia so slow to fire.

Welcome to “Buff this Hero #something-or-another”!! This entry will be to address a hero that the meta felt was Average, maybe even a little above average when she was released. Today though Misandra is in my opinion one of the weakest 5* heroes in the game. 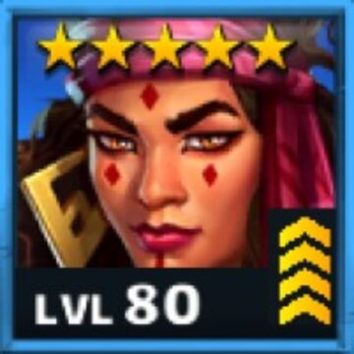 Effect 1
Deals 310% damage to the target

Even disregarding the issue of stats on the older heroes, Misandra has been left behind in value due to an ultimately weak special. Conditional snipers are less than ideal, however, you can at least meet that condition to bring out the maximum value of said sniper. Be it Captain Nemo or Fenrir for example, one can create a strategy to help get their best results while attacking offensively.

Her randomness would not be an issue if her primary/initial hit was properly strong, so at a minimum you get one good hit guaranteed. Her weak damage would not be as much of a problem if her special had no random element to it.

let us see if we can not fix her prior to said costume!

There are two good ways of fixing her in my eyes.

The first would be to simply bump the damage percent of her initial hit up to 450%. This guarantees her value as a sniper, albeit not as powerful of an initial hit as say the Dark Lord, but with the potential of 3 more attacks each at 225%, all at Fast speed…would make her potentially scary and a true wildcard.

The second option would be to simply remove the randomness from the special all together and make her special into the following:

Just wait a few months, she’ll get and a new costume then you can pull her again. They have pretty much given up on balance updates(at least for buffs) unless it is for newer portal that isn’t performing as well as they would like. Balance updates now are mostly through costumes.

Of all the possible cards from S2, i ended up pulling her. She will be up for SE.

Poor Misandra. She was the first blue I ascend and limit break. Still usable but very weak just for that little unreliable boost of mana. This character is fixed by guaranteeing three hits and upping damage.

I pulled this chick maybe ~year ago and she still sits on the bench as 1.1 waiting for being food for soul exchange someday. The costume didn’t solve anything for those who owned Misandra already. Either buff her or deny the buffs permanently. I just hate keeping her on the bench forever waiting for possible buff for her being super weak “hero”.

Her costume is pretty good. Mine is at 1.1 as well. She wont stand a chance in the current meta

I’ve had her maxed, fully embled and limit broken for a long time. She’s weak, but sometimes when she chains those hits it helps to turn defeat into victory. As I have already said, should be three guaranteed hits and more damage, then she is perfect.