Great post.
I myself have been lucky enough to be playing with two maxed Delilahs for a looong time, so minion hell it is, exactly as you said.

Already Done @Olmor in the initial post, stats in the 2nd and a full view of the Hero cards in the 3rd. Enjoy buddy!

They max out at 3 to my understanding @Kinggerbs

Any comments with Gobbler would be great (being I no longer own him LOL).
Can you raid with him and specifically pick out a team with 1 or more Minion Summoners possibly & keep him alive (ha ha) to provide his overall effect? Thanks @NPNKY

@Kinggerbs if you haven’t watched the video overview of me using Cap in the Top-100 Leaderboard, I would suggest it. I show his success in staying alive strategically and Minion Kills to include 1x, 2x, 3x, 4x and 7x. Obviously my support heroes are pretty great…

Honestly this recent discovery of a heroes charm and joy (whom I was going to eat at 4/70) has given me some needed hero happiness again. Previously that was held by Cheshire Cat, then Valeria. So Captain is now my current fav 4* that I can use (at least in raiding vs. Minion Summoner’s). 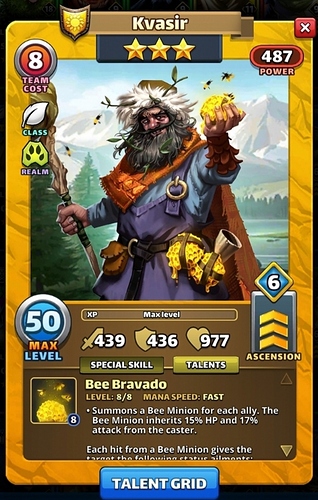 Thank you @Olmor - I had a feeling being I let DraGoN-CoVe go to run Batman I would be missing a couple! DARN! I’ll see if I can incorporate an update really quick

I placed their Minion Basic stats in place of their name header.

What this list shows me is that we need to convince SG to create a couple of blue minion summoners.

DARK is the power in this game IMO

Well that’s good news @Razor, it’s mostly ALL I ever pull. You can imagine my AM dilemma since I see to only get Compasses, gloves and orbs (1st 2 pushing 50 each and orbs well into the 20’s) meanwhile 4* AM’s continue to elude me daily. 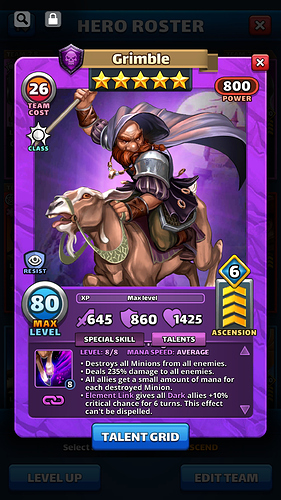 I have found more use for him lately as i have moved up into low diamond on raids. I’m facing more sheshats and other minion producers now so seeing him ride along just munching them up is nice.

The unforseen benefit is against the druid class. Cademon, vela, gadeirus, melendor and others at +1,have a chance for thorn minions. I’m facing a ton of velas and its nice to have him handy as a backup in case. Been running purple tanks so he works there for me as I don’t have any other useful purple tank, so its sorta by default.

I took a suggestion on the grimble thread and didn’t max him until i had 10 tabards in case of a good purple pull. Honestly I’m very happy I did max him.

@Olmor I have updated All 3 related posts with Kvasir’s information - thanks for catching that for me!