Paired up together in multiples they can put some serious Minion Meat you will have to eat through before you even attempt to gnaw on dem Enemy Hero bones!

The Hostile takeover of the Hero Mini Me's could potentially change the landscape of Empires & Puzzles hero selection as well how many of us are accustomed to playing!

Well, if that were to happen…What is the best way to address this potential small package problem?

Who the hell are they?

The Captain of Diamonds, Gobbler and yours Truly the goat herder: Grimble.

The three Amigos no one batted an eye at in terms of their potential until NOW. The potential in a single turn attack to exceed 3 thousand HP using a single hero! Immediate heath increases of 500 to 1 thousand HP or MORE for each of your left standing heroes.

Yeah, that’s Fkn big… the question is not do you have any of them, it is did you keep any of them?

Watch an info-packed ensemble produced by RaZoR which will briefly school you regarding minions, some of their makers and more importantly the takers of their precious little lives...

with SPECIAL GUEST: The Captain of Diamonds 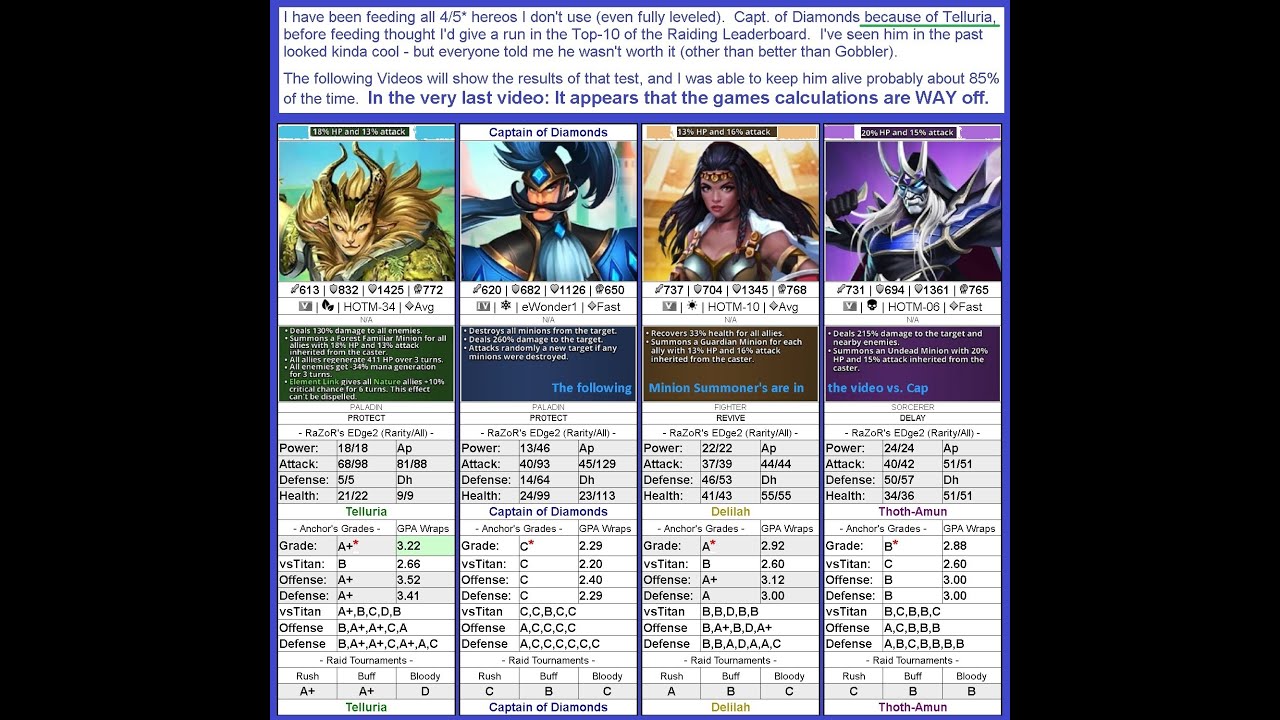 36 Likes
ACE : First Look should get a 2nd
:information_source: Lady of the Lake – 5* Nature/Green from Knights of Avalon
Got tabbards and a tough decision
Minion Madness Vol.II - Age of the 4 * heroes
:balance_scale: Hero Balance Discussion: Noor
nevarmaor March 22, 2020, 4:13pm #2

I had a feeling this was coming, it seems to be arriving faster than I thought.

I wouldn’t say no one saw this coming. The general consensus when Grimble was released is that he will most likely be much more useful when all the new minion heroes join the game but during december, he was just a little too nice at the time.

My Grimble is still only at 3/70 but then I’m still fairly low level and usually he’s facing non-levelled minion makers or teams that are close to my standard relatively. Already though, I’ve used him to great effect - in teams that are often more powerful than mine. He was my very first 5* so obviously I was going to keep and use him.

Certainly I don’t rely on him as a hitter but with other purple heroes coming up that he can link to, I’m looking forward to getting that final tabard so I can see what he can really do.

I haven’t leveled Grumble yet, but I do have Captain and Gobbler maxed. Grumble will get there, but other heroes keep cutting the line in front of him (Looking at you, JF, Telly, and Vela)

Unfortunately I haven’t pulled any of these minion eaters. Even in low diamond where I reside I am starting to see more minion-heavy defenses. That significantly slows down the raid as it now takes two special hits to kill a weakened foe, one to get rid of the minion. I am now almost always using two healers when raiding just to increase my survivability.

He’s my only purple 5 star so i maxed him in jan. When he goes off he’s sweet, but i find his special vs minion heroes is unreliable: it’s overkill, or too slow. Maybe 10% of the time it goes off and changes the match.

I didn’t chase him so I’m not disappointed, but i feel like he’s too unreliable to be a real counter for minion spam. Maybe different if/when i give him emblems and he gets even tankier but I don’t know

The question now becomes which do I want more from Atlantis? Proteus or Gobbler?

The first Atlantis’s and Wonderland I played I fed Gobbler and CaptD to heroes I had a greater need for, like Lianna and Alice, but recently, I made a point of stashing one of each of them away. I also picked up a Grimble when he came out. I haven’t done much to level up any of them though; 1/23, 1/7, 2/23. Grimble will probably make the 3/70 lounge for a while before grabbing tabards, since Kageburado has first dibs.
My minion Makers are coming along ok though, as I have 7 of the makers mentioned

The implication being that a minion eater is better than say a good AOE to clear the minions out? I would like to see the the results of serious testing on that. The minion eaters I have seen don’t do much when they fire even when the minions are up (except get rid of the minions).

This I’ve been waiting for. I knew we were heading here which is why I have my Grimbles, CoD and Gobbler sitting in my roster. Guess I should start working on them.

But after I finish my other ongoing projects provided RNGesus doesn’t decide to have mercy on me and drop one of my great wants on my lap.

Great post.
I myself have been lucky enough to be playing with two maxed Delilahs for a looong time, so minion hell it is, exactly as you said.