Hi all, just got super lucky in a 10x and got Miki. I know she’s the beast on titans.
My question is if Miki on 10* and 11* titans durable enough or do I need her fully maxed? My current attack booster is guardian gazelle fully maxed. Thx in advance for the help.

I pulled Miki back when he was a HoTM. Since then, I have leveled him at 4/80. He’s a beast at 4/80. If there weren’t so much competition for Barbarian emblems, I would put as many emblems as I could on him.

At 3/70, I don’t know if he will have enough shield and health to holdup unless you bring a lot of heal potions and mana potions to the titan battle.

Miki 3/70 for my experience was perfect until titans 8*

3.70 is worth using against red and yellow titans in your position…

Maxed, he’s noticeably better - doesn’t need to be, but you do notice and appreciate it.

Facing 10* titans here and sometimes 11* titans (we kill it if it is a rare one). My 3/70 Miki can hold on to these titans. You just need to maintain his health by the use of potions. He will be my next blue legendary to ascend not only against most titans (some rare titans reflect blue, in which case, my Gazelle gets the action) but for the challenge events as well. I just need the last scope.

I even used him at 3-70 against 14* titans for quite some time. Finally got my 6th scope a few weeks ago.
You might need an axe and a turtle banner though but it is manageable.

Yes, I was using Miki on up to 12* titans at 3/70. I use him for all titans except purple (Ranvir does the job there) and the blue reflect green titan.

I have since maxed him and he is stronger, but he definitely is viable at 3/70.

…still now when I see Miki in my level up team I can’t believe I got him…the only hero I really needed on this atlantis…already had Ursena, Kage etc…yeahhhhhhhhhhh…titan killer in da house…

Except when you face a blue-reflect titan. In which case, have your second attack booster hero ready, i.e. Tarlak, Guardian Gazelle, Ranvir or Wu Kong.

Thank god I have everyone maxed already exceot for Ranvir

don’t have him but don’t mind because I read a lot of negatives regarding him… so I should use Miki on every titan except green and reflect blue right?

You got that, yes you do

Bring Miki up to 3/70 and try it. If he can survive 1 hit from the titan then you can make it work.

I personally am using Wu Kong just fine at 3/60 on 7* and 8* titans. I just bring HP potion as one of my items. He can usually fire 2-4 times per titan and I dont use mana pots.

Until I have 12 more scope, and no other blue to ascend except 2nd Magni or Thorn, then now Miki is fully maxxed.

so I should use Miki on every titan except green and reflect blue right?

Depends which of these you have…

I’d use Tarlak against blue titans, always (ie: green mono) whether blue reflect or not.

Against green ones… TBH doesn’t matter much, it’s the red 4 that’ll do the damage.

Anecdotally, this is what nets me the best average scores.

I have mine on +18 mostly because of events where I use him too. 3/70 works fine until 9* or so if talking purely of titans, theoretically even for higher titans but then you need items. But if possibility arises and there are no heroes like Ariel then you should ascend him as well, he makes Challenge Events and some tougher quests (Legend 10th Stage) much easier.

I had miki at 3/70 for the longest time, and was good still ok on 14*, but had to use a lot of items to keep him alive. recently maxed him, and i feel it made a significant difference

Yeah currently we beat 10* titans, 11* are a little too strong for my mates for now…so I’ll max him til 3/70 and look how he takes the hits from a 10*…usually when I see that there are some tiles I use mana pots to charge the buffer und defdowner immediatley and I blind the titan too…if 3/70 is not enough I will have a tough choice to make…til I got Miki I wanted to level Alice…Misandra and Raffa are no option in my eyes actually… 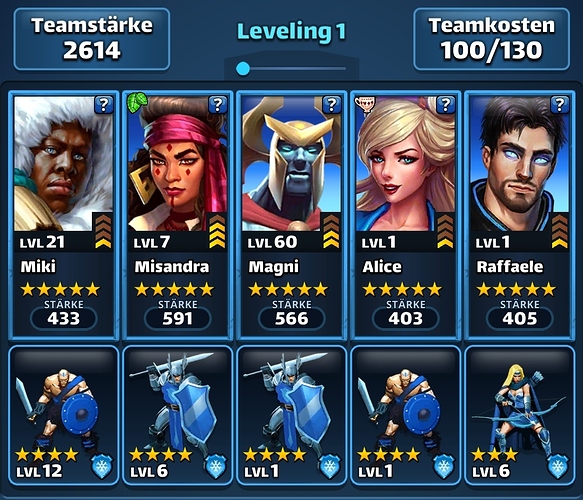 If you are going to use it just for titans and you are willing to spend more forge than normal to make him survive, leave him at 3/70. In my case I have only 2 blue 5* so he went to 4/80 at the time I got another set of 6 telescophes. I love him

He is a beast in events and your Titan score will go up, thats for sure.