Anyone else noticed the lack of Midnight roots recently, I am playing the game no differently I am facing no tougher titans if anything I am making less potions than I used too due to my tougher teams.

However my stack of midnight roots is dropping at an alarming rate, even Atlantis farming using 40 energy on province 12 yields only two or three.

This is a huge drop off for this resource.

There was a lack sometimes, but now after a few rises… 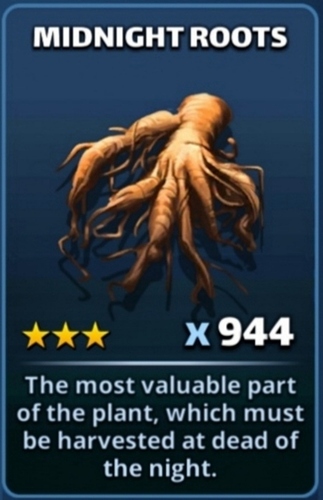 I predicted exactly this comment yet mine has gone from this to 60.

What item do you produce with them the most?

I just took the alternatives for a while and now everything is fine.

They are used in both higher level mana potions not sensible design but there you go.

All fairly important, I would say I am using less of each one, I have gone back to using minor to try and build up supply again but even that isn’t working and Atlantis was a huge disappointment farming them.

I went small mana and dragons instead, until the roots were back to about 100. Now this purple dust is lower, but still enough.

@Edamer… Agreed! I used to get loads of them during AR, and though I went through 18 WE flasks this last one, I barely got any roots! I’ve been forced to almost stop using mana pots and bombs altogether, which makes me super sad in addition to really hurting my Titan scores

I’ve got no reason to believe that the odds of getting roots has changed. (But no proof that it hasn’t.)

I will say that given that the odds of any 3* crafting items are quite low, so a long burst of exceptionally high or low return should hit many players.

Personally, I farm AR in the 3-flag zone for best overall farming and best total return of 3* and 4* crafting mats even tho specific crafting mats like roots or nuggets have higher yields elsewhere … but I’m farming for backpacks too, so I’m not sacrificing anything.

Can someone please point me to some legit map levels to get midnight roots??? I can’t find them anywhere!!

This farming guide is my best effort to combine all the big farming data projects I could find with all the data I could collect. (Nearly 40,000 for Seasons 1, 2, and 3 as of Late May 2020.) It includes what you can expect to get for all released levels in the game, plus special listings of the best places for filling monster and elemental chests, and for finishing the farming (avatar) missions for S2 and S3, and how Atlantis Rises changes the farming in S2. Barry Farmz Here: Summary – Google …