Please share your thoughts and discussions about the recent announcement regarding the May 2020 Balance Changes.

As previously announced, we will be making some balance changes to Telluria and other Heroes. Our initial plan was to implement the changes in Version 30, but we’ve been working hard to get the changes out as quickly as possible, and the changes will be released already today, 2020-05-19T11:00:00Z (UTC), so everyone has time to adjust their teams before the next War begins. The full list of changes can be found below. All players will be receiving a small gift to their in-game Inbox once these … 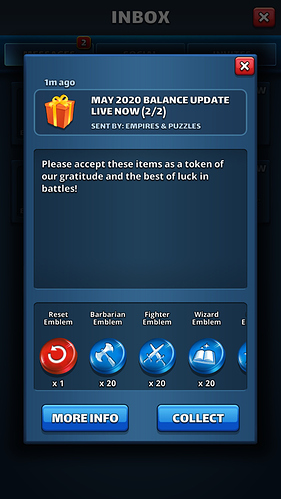 Please let’s stay civil and on topic here.
Click this hashtag for a refresher on the #forum-rules.

So…what do we think?

Telly will still be a top tier tank, and Vela is still good. Really happy about Atomos. But really sad that Khagan got nothing.

Telly will remain a top tank but now maybe argued as not the best. But lets see if diversity will come back which i doubt because the synergy with vela is still there. In all, i am not against this nerf, and my +16 telluria is still happy.

But of course, guin and ursena owners are happier.

Given that changes are in a few hours I suppose I shouldn’t bother with my tourney hits just yet…esp if Telly is tank.

So do you guys think Telluria is still worth ascending? I have been holding off a while for the final changes. Note that i have no other 5* greens anyway

My tournament defense will get changed during the tournament. Let’s make 1000s of rant threads.

I like all the changes made, no real major disruption imo.

So can I use emblem on telluria ? 100 emblem waiting for her

Finally! I really hope this means the end of all the Telluria threads.

Glad to see Margaret held to her beta form, I’ll definitely be working on her very soon to 3/70 at least. She’ll get the tonics unless I get Lianna meanwhile.

Telluria is still a top tank, Vela still has a great synergy with her but they both are correctly balanced.

Overall a good job from SGG - but I still think this whole mess was a bit their fault for releasing Telluria from beta as was. The feedback was lound and clear that she was totally OP.

Wait… not sure if change to Guardian Owl is nerf or buff?

what kind of loss of attack are we looking at from the decreased damage boost per dead ally? or is it mitigated by the increase in special attack power? o:

The nerf of Telluria is too much. The Hp regeneration has to be as before. I still find it unfair.

Doesn’t matter, he’ll be changed from meh to meh. You won’t face him except on legendary rushs and maybe some wars, but he wasn’t, isn’t and won’t be seen often enough to think about it.

Ok So all the people that were crying about tell, or worried about how so much would be taken away from her, this actually isn’t that bad. My tail is currently at 19 emblems and yes I will admit she is very overpowered. But definitely a game changer as we all have learned by now. I’m not going to be complaining or posting any negativity or drama or nothing like that. Out of all the heroes that they made changes to only tell is the only one on my roster that affects me personally but for those of you that have these other heroes that they made good or bad changes to I hope you are either satisfied or not too angry. Happy gaming everyone

Happy with the balances there. At least some of these heros are more usable now. Will wait and see how well Margaret fair now… or any beta tester can give any insight?

They will come with some bottle of energy or at most some gems … I spent about $ 200 a month and I completely regret every penny spent so far. total lack of respect.

Right in the middle of a 5* tournament is a little off; other than that I’m fine with the changes.