Anyone maxed him yet? How is he playing? Mines almost to 3-70 , i have 12 tonics and no one really waiting for them

Pulled Toto, not planning on leveling him. I played with him in beta and he never “saved my bacon”. Plus we just got Agustus through beta (green slow pre-cleanse + massive overheal + massive defense boost) and he makes Toto’s niche damage reduction look pretty silly.

Toto should probably move to Avg speed in today’s market.

I got him but I don’t think I’ll ascend him, like it was mentioned the new green 5* Christmas hero has better skills.

I wish Toto had a skill to reduce all damage like Sif or Wolfgang, not just against the stronger element. If I don’t get the green Christmas hero then perhaps I will level Toto since I don’t really have any other green healers (Alby but that’s not much, Ratatoskr but he’s only staying at 3/70 for titans). I think I would take Ivy over Toto, maybe even LotL

Is it true Toto’s name is being changed to Max, and if so does anyone know why they are doing this?

Very likely it’s because they are making wizard of Oz heroes soon. Toto is one of the more iconic names in the Oz lore, being the main protag’s pet dog. So this toto has to change his name

The hero card name is updated to Max from Toto.
I will look a pictutre for Max, and I will update the image to later today.

That’s a horrible name, too short, looks stupid and lost on his card, what’s next to expect, a sad day

please name him Maximilian at least or Sir Maximilian, I would have never started to max a Max, RIP Toto 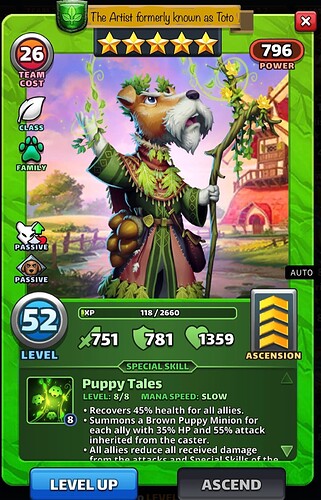 Now it makes sense why he’s drawn like this. He’s looking to the skies asking the SG gods why they changed his name

Such a boring, unfitting name for this hero by the way. I think even ‘butterscotch’ would be a better suited name than what he has now

Sir Woofenstein would have been a better name for Toto. Or even Barkolemew the Great, Canine Storyteller extraordinare.