Event icon disappearing, game crashing, not being able to log in while the event is in Beta and game servers actually being stress tested and you expect 100% perfect participation?

Yea, omegalul @ you for sure.

But they didn’t, I don’t know if you’re aware, but for some war bands the icon disappeared and they couldn’t get in for hours.

I’m a relatively new player… about 3 months in. Level 29 turning 30 today. SH20 under construction. I really don’t have a roster that can attack with all the flags they give. Should I be excluded from play simply because I’m not up to your standards?

The war disappeared for everyone, even for me, but i used all my flags, that’s not an excuse, sorry 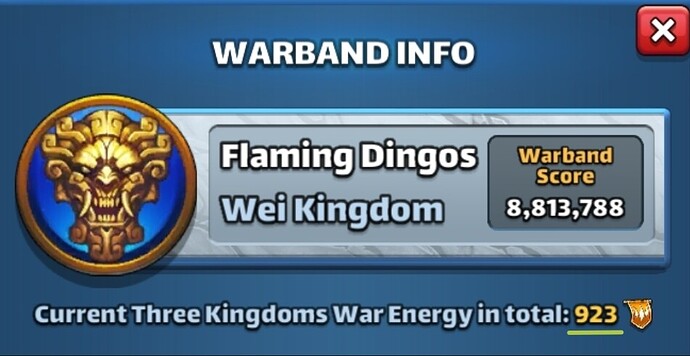 Don’t worry. Because of match-making, you are assigned to a Warbands where all the other players have roughly similar strengths (and I assume, rosters that are in a similar state of development). Probably, most of the other players cannot finish using all their flags either.

The main gripe would be that in much stronger Warbands (i.e., all the matched players there are long-time players and presumably with much bigger rosters), many players still do not use all their flags. There are some technical issues which may explain their inability to finish using their flags.

Here is the solution to all this mess

Delete the entire event from the server. Never mention it again. Try to purge it from our memories with a nueralizer.

Then give us the Monster Island event.

This is the second war and if I am not mistaken we did not have the game disappearing issue before, just a overload servers that crashed for everyone but it was fixed. There were many that did not used their flags neither and we only had 6 flags. It is becoming a pattern of people that just do not use flags

Just because the fix became available at a convenient time for you doesn’t mean it did for everyone. Remember, some people like to hold all their flags till the end and use them all at once. This is a very common war practice. If they were following this war practice and got locked out then that is SG’s problem. Please remember that this is still a BETA test

I used all my flags, but with everything going on it the world, and game getting glitchy on opening the event, think maybe we could relax, see how it goes when it runs better.

The way that I see is that it is beta so SG has to do something to address this and keep testing it during beta, it would be discouraging for many player, when this event comes live, to still have the same issue of players not participating after they sing in, ruining the game experience of others. The game have may solo events that depends on you and your motivation to participate but if you sign up for a group event then please be a bit considered to others and do your best

Why not make the warbands smaller?Either way, not that interesting. It’s like raids where you can pick your target. But I get much better loot in raids and fill chests with chance at mats. Not upset about the issues as there’s not much lost. Just not very creative.

I made a similar proposal before, but I will propose it again.
Players are already experiencing serious problems with Wo3K.

Strengthen the highest grade rewards.
The rewards of the player who left the flag will be downgraded according to the number of flags left.
A player with zero flag usage can get zero rewards, because that player isn’t doing anything.

The crash is not an explanation for hundreds of unused flags at all. Yes it can explain a few people on either side, but not all of them.

We had 718 unused flags, the other side 623. This is not because of a few hours of server down. It is a horribly designed feature!

People do not need to be punished, but at least they should not be rewarded for leaving flags unused. Currently people signing in and then not using any flags at all will still gain 75% of the loot of the number 1 top performing player! That is ridiculous!

700 unused flags means more than 50%! It also means the entire feature is pointless to play in the first place as nothing you do has any meaning at all. The outcome will be decided by other things not by you doing 12 one-shots or you using no flags at all.

Also people using 0 flags should simply not be allowed back in the next time. The number of unused flags will never be zero, but an effort needs to be made to reduce it to levels where it is not the only thing that matters.

A flag usage chest would be a positive addition. Use 6 flags, open a chest with some loot in it similar to tower chests. Use the next 6. Get another chest. Positive reinforcement instead of negative.

Side note, 12 flags is dumb for this event to begin with

@Yanitsa ……Ok … to be fair I rather enjoyed the war of 3 kingdoms. It made a change with 12 flags and it made you think who to put in your offence team - I used some of my 4* heroes over my 5* roster, I used some unlevelled 5* stuck at 3/70 and I even used a 3* hero.
Used all my flags and ended up in position 19 overall.
Yes I appreciate that there was a tech glitch when the icon disappeared for some players - but let’s remember it’s a global beta exercise.
With regards to punishing people or penalties for unused war flags …. Sorry it’s a big fat NO from me. RLS happens - it’s a game.
The two things that need a tweak for me are (a) the war chat - it got very confusing when people didn’t understand each other and then it resulted in players trying to use imoji which made things worse (b) the point score system ie you attack a team for a one shot, defeat 3 heroes in the defence line and get 7 points. Someone then does a clean up, defeats the two damaged remaining heroes and receives 23 points.

Agree on the 12 flags, it forces me to work on some additional heroes to fill out my roster and field 12 decent teams. By the end of this I was struggling, but I still like having 12 flags and hope that if they don’t keep it they instead compromise and go to 9 flags instead of 6.

Don’t agree on not punishing missing-flag-players though. What current alliance is okay with it’s members missing war flags? Yeah life happens, but habitual lack of flag usage is something else, and such members need to opt-out of wars.
In this 3 kingdoms event I need my Warband using all their flags because the success of my Warband and the Kingdom I am in is reliant on people actually engaging in the process.

I also find the idea unfortunate that a bunch of people who “participated” will be receiving rewards, even despite the fact they failed to contribute at all. I don’t think SGG will distinguish between someone who scored 0 points or 300 when they send out the 150 Event Coins,

It’s not excluding you, you just have to have enough heroes to make 12 attacks, it’s like for a gda if you don’t have 6 teams, it’s out.
It’s just advice

Translation…btw English is the official language in the forum. Google translate is a fabulous tool before posting