The other one that may help is a couple of Gretels.

Thx bud. !! Sobek was my only 5* pull last Dunes event & I completely forgot his special pierces like Cobalts x3 !!! Not as hard but still high damage.

Also, what’s the key to high scores ?? Anyone care to share?? I know specific heroes matter so if you could give an example of the heroes needed & methods used it would help a lot !!!

The event effect and gargoyle effect were both interesting to play against, but combined they made boss fights tedious instead of interesting. I like being pushed to re-think my timing and tactics. But for me, this event had no sweet spot where it was fun. By the time I really need to consider those effects, it was already a slog.

I really love the look of the gargoyle heroes, but opted not to make any pulls because the event simply wasn’t fun - and I can’t see that changing even with the boost of event heroes. In contrast, when I struggled with the Challenge Festival I made ~20 pulls because I still enjoyed it so much.

I wonder if the event effect should only occur for some stages, and suppress hero stoneskin. That avoids the doubling effect, and adds variety to the levels.

I had great luck mixed with

luck. At the end of almost every pull a bonus award! Here is my end result for all my pulls. I had two Kara’s to start! 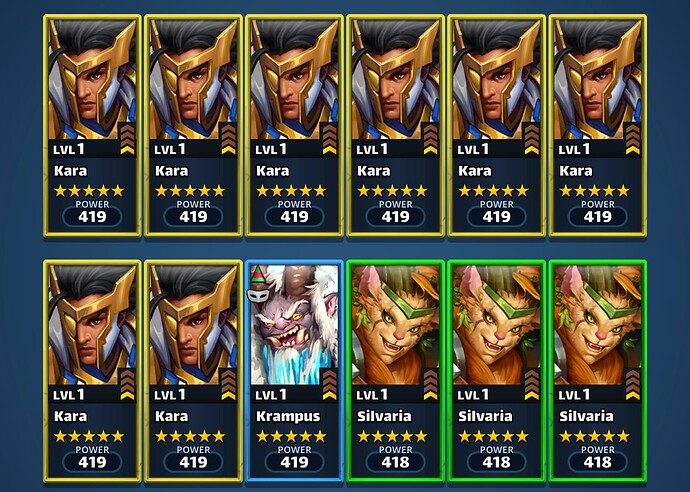 Here is the topic for you:

This thread is for discussing whether Sanctuary of Gargoyles event is well-balanced, or whether you think it need to be easier or harder. This thread is NOT for general discussion of Sanctuary of Gargoyles event. For that, please see: https://forum.smallgiantgames.com/t/master-sanctuary-of-gargolyes-challenge-event-guides-discussion-summoning-results/270473?u=playforfun

Poll poll If you voted that the event is too hard, then please choose what do you think what is the primary …

You can also find some stuff on “Dator” and “Exsecutor” youtube channels. For team buildimg just check some of top100 event players.

Bit late to the party, but I’ve been too busy to get on the forum earlier.

I got some good boards in epic, so I finally decided to go for it. I couldn’t bring myself to replay stages 8-10 of this uber annoying event, so I let the chips fall where they may.

Way too close for comfort, but it got the job done.

I was lucky enough to hit 3 of my 4 hero targets from the Gargoyle portal! I pulled Penolite, Kara, Kalo and my 10th Joon! Not too bad since my Yellow roster can use all the help it can get! I also wanted Goseck, but he was not too be this time around! Penolite will be my priority once I get the ascension materials to max level her!

So for scores I got into brackets I wanted to.

Rings will be handy, and Tabard is essential since I want to ascend Lu Bu and this is 6th for the set.

Pulls were less lucky, no 5* Gargoyle from ~70 pulls, just Khagan

NOTE: Please do not, under any circumstances, share IMAGES OR VIDEOS from Beta in this or any public Forum thread. Violations can cause players to lose their Beta accounts, or threads to be closed down. This thread is to provide early insights and discussion on the balance changes to Kalø ONLY. Special Note about #hero-balance Forum Tag This thread is tagged with #hero-balance, allowing Forum members to choose to increase or decrease their visibility of this and similar threads. For more i…

Here you go, he lasted for a few days.

Is this an EP record for fastest nerf ?

How long did azmia last? I only count after the debut event ends, so to me it’s 4 days

I counted from Day 1 of gargoyle summon portal. Cos some levelled him the very same day. lol

I levelled Kalo and Azmia fully pretty fast. I’m not pulling from season 5, Wo3K or season 4. The balance changes are happening so often because they’re releasing heroes too fast. I don’t care if you want to release a new hero everyday, just make sure you take the time to investigate it before you put it out there. It won’t be perfect, but I’d like to think the nerfs would slow down.

I honestly still think he’s not that big of an issue. That said, I may just have a better roster to counter him and there’s some luck involved as well. But every time I faced him, even if he went off, I was ok. I have Quintin at 3/70, I just target him first and he’s pretty much gone. I’ll use ruby to cut back him mana and buy myself time. I focus on him like I’d focus on MN or and reviver for that matter.

Anyway, it ys what it is. Acquiring and playing with new heroes is one of my favorite aspects of the game, I’m sure most people feel that way. So the fact that I just have to sit back and wait it out to level a hero is frustrating. The reason I decided to spend on the game was to avoid wasting precious materials, to progress faster. Summoning is almost a liability at this point.

That might be the issue for those who have trouble facing him; not having Quintin and Ruby and the likes

But I suspect Kalø is mostly present at the top, so those without top heroes won´t be seeing him that often. Hopefully

I haven´t seen him down here yet at least.

Yes, one might be better off, waiting with summoning until a few months after a new hero is released (assuming said hero is available to be summoned once more)

Should he be able to stop Stoneskin

I am thinking that the “cast” in Malosi’s special is applied as using a special skill to buff. Stoneskin comes from a passive so isn’t “cast”.

If you can find a Chakkoszrot, he has a passive that gives him a buff when he receives a negative status effect. Fire Malosi and see if he gets the buff. If he does, then Stoneskin is consistent with that passive.