I just finished Domitia, so instead of the yellow death squad, i mixed it up and decided to bring her along for this today with this team: 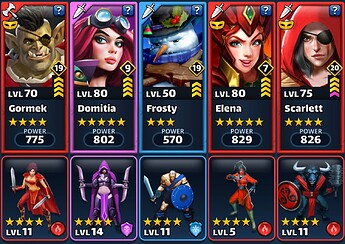 I maxed Domitia because i had a lot of tabards and wanted a second dispel option in purple and i’m not planning to do a second Sabina unless i get her costume. and she does decent sniper-ish damage and i don’t have a lot of good damage dealers in purple. Up to +9 for the mana node. Troop not quite there yet to get her to 9 tiles though, hopefully soon. also, I use cElena a lot, more than i thought i would. she may get more emblems soon. 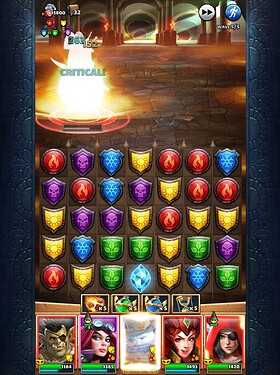 pretty nice, no items. As usual, Frosty was the actual MVP here. an accidental cascade put me in the boss stage with no one charged, but i had a full wall of Frosty minions and had just healed, and found enough red and purple tiles to fire everyone once pretty shortly. Nashgar went off, but hit Gormek, who I wasn’t worried about, with all that hp. i had hit Azlar with Gormek, then Scarlett and Domitia and he was pretty damaged, then i just let him go off and he killed himself on the riposte, and the minions absorbed most of the burn.

boss Scarlett went off three or four times and evaded a lot of damage, but i kept getting plenty of blue tiles to keep healing everyone and red to keep the riposte up, and eventually she also finished herself on the riposte. a success.

Barbarians to Zekena or Gretel, or maybe Sally. Rogues either for a node or two more for Domitia or maybe some to Zila Lei or Danzo. Trainer to Guardian Falcon.

Same team as last time. Almost done with Kage, but I don’t think he’d be an upgrade really.

Used specials pretty liberally to take out mobs before they could ding me too much. Almost bit me in the rear, as I came close to not getting everyone recharged before the bosses, but I did. Also had a green diamond on the board. Every time I think I need to replace glass cannon, color disadvantaged LJ in this lineup, I get a run-through like this where his mana control is great. Had a lot of junk to clear off the board during the boss wave, and I was able to do it without fear, because each tile only gave one-quarter of the mana it normally would. And because of the green diamond, I had this ailment applied for the whole (short) match, and none of the bosses fired. Frank’s 44% def down plus the high attack for both he and Grimm are enough to make minced meat out of the bosses most times. C. Leo’s EDD lets him do more damage than he normally would as well. No muss, no fuss.

Barbarian emblems saved for Kage, although I’ll be resetting Obakan to max him anyway. Then, I’ll be hoarding them for Sally, Noril, and Whacker, I suppose. Still undecided on rogue emblems; will wait until after my S4 pulls tomorrow to commit. Probably going to end up being Zila Lei. Trainer hero to Eichelborg.

Same team no items this time around 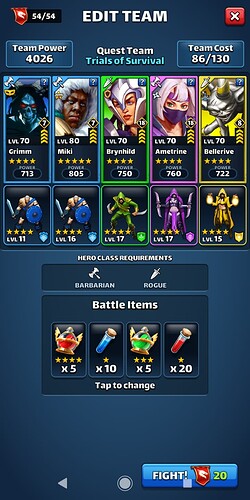 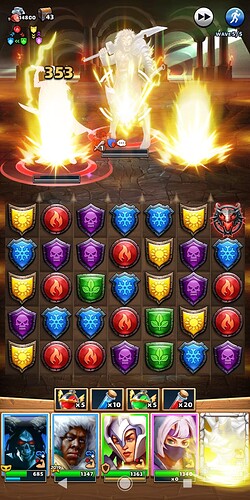 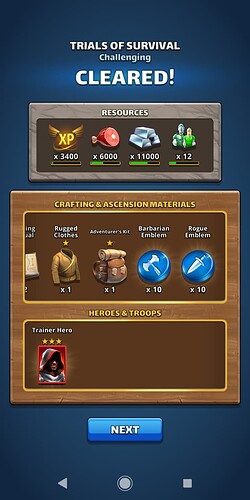 Easy as always thanks to Jott + Miki.
I rarely use any items for this, maybe health if I need anything. Today I didn’t use anything although Peters did almost die, he was on red health.

As long as I can keep those middle 3 alive, then I don’t care about the other 2 dying, although I prefer none to die.

Emblems are saving for G Kong, he is +9 right now and needs 125 for the next node, I need 5 more.
Rogue emblems are going to just go to a 4*.
Red Trainer went to Raff because he is close to being maxed (after a few years of having him woohoo haha)

So, Para did well in the Trials of Shadows, so it was time to give her a go here. And, I decided to go rainbow so I couldn’t complain about the board being bad. 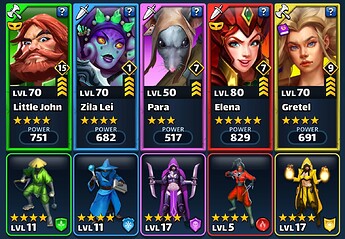 everyone here is deserving of more emblems, but i’m out of rogue emblems and food at the moment. oh well. I almost brought Maeve but wanted to do rainbow and Para took the purple spot today. so, fingers crossed… 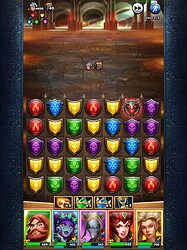 this went much better than i expected. I was fully prepared to use items if necessary, but everyone did their job here. i went in fully charged and thanks to Gretel and Little John, only Nashgar ever fired a special, and Para’s attack down was active, so he didn’t do that much direct damage. Zila Lei’s defense down meant that even non-attack-boosted rainbow tile damage was reasonably effective, and Scarlett went down first and fast, and that left me a hole to charge everyone up again. I hit then I hit Azlar repeatedly with Gretel to keep him from firing, and the bosses did a lot of damage to themselves via slash attacks. in fact, I didn’t realize that Azlar had slashed himself to death on the riposte and almost didn’t catch this final shot.

Another successful trial with Para.

Rogues probably to Domitia, or maybe to Maeve. I just realized i have a huge stash of barbarians, so LJ and cAzlar and Gretel will all get more. Trainer to G. Falcon 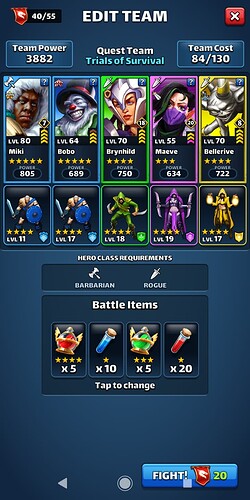 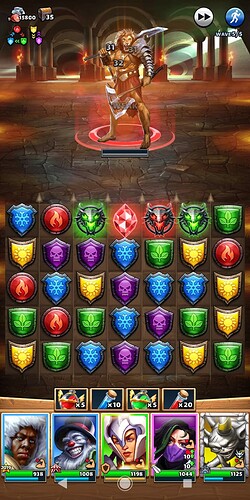 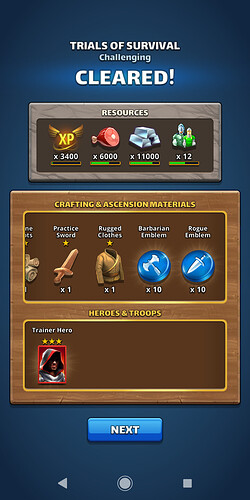 Crazy week this past week, so just posting this for continuity. My team this time:

Brought in Kage for C. Leo 4^85 +18. He didn’t provide any particular advantage or upgrade; I just think he’s fun to play with.

I don’t remember at this point how the fight went, other than I didn’t need any items to finish.

Barbarian emblems get a node for Sally. Rogue emblems saved for Griffin. Trainer hero to Tahir.