Quite easy this time. The team was Zagrog, Diaochan, Kullervo, C Kadilen and Krampus

Same team as last time, but Norns is up 9 talents compared to then. (How is that possible?)

Really starting to love this team. Blue tiles are pretty nuclear, so the mobs don’t usually last long. Entered the boss wave with all specials charged. Everyone’s specials affect all the bosses except Thorne, who I fired at Scarlett. That, plus a blue match-3 under her, and she was done in one turn. Thanks to Norns, those blue tiles are also brutal on Skittles, but the debuff wore off one turn before I needed it to, allowing both Skittles and Domitia to fire on the same turn. No matter; Krampus was ready to flip the attack debuff, and it was over shortly after that.

Saving sorcerer emblems for Norns’ last node. I really underestimated her and probably should have maxed her sooner. I drew Griffin earlier this month, so I was going to save rogue emblems for him, but I realized today that I’ve been saving them for so long now that I had enough to take G. Jackal from 0 to +19 and still almost have enough to take Griffin to +20 when the time comes! (And I haven’t even started Griffin yet; D’Andre is still ahead of him.) Trainer hero to C. Magni.

Para gets a big thumbs up.

Even more jealous now. Wanted Para in Kalevala because I still don’t have a three-star purple healer. Glad you found him/her/it useful. I may target Aderyn next CoK. I go mono a lot, but not having a healer in every color/rarity can put a damper on that.

My Scarlett no longer has emblems, I removed them for someone else so I used:

Carol has no emblems, but it was a cakewalk.
No items were used and no deaths.

I drew Griffin earlier this month

He’s awesome. My 75 +20 Griffin replaced my Joon after I stripped his emblems and any backslide in production between the two has been negligible.

Anyway, I did a whole new team for this trial as an excuse to use both new, and infrequently used heroes. It wasn’t a great team as 3 heroes were green against red mobs and a red boss, but it worked and was fun. Here is the team:

Costume Kashhrek is newly maxed and wow. His heal is massive. Wren and Peters were pretty much at, or near, double health the whole time.

Wren is newly maxed and I may put emblems on him given my other greens. I had mixed feelings. In a single hit Peters does a lot more damage. It was fun with Domitia’s yellow D boost in effect to allow Wren to hit multiple bosses. I will definitely keep playing with him. Domitia was the last boss standing and I tried to have Wren nut her to death. Unfortunately she survived his hit with like 100 HP left. I think his A drop helped keep my heroes okay and having that at fast speed in green could be helpful.

Peters is maxed and I got him late so rarely play with him. His silence is nice even if it doesn’t drop mana. I was surprised how hard he hits though. It was a fairly decent hit.

I definitely want to use all 3 of these heroes more.

Jackal and Griffin rounded out the team and they’re almost always in this trial. They’re a great 1-2 punch. Maybe I would have out then next to c-Kashhrek as more important. I thought their emblems and LB would keep them alive. Jackal is just so fragile still though. Jackal died maybe 2/3 of the way into the final boss fight. They targeted him a lot. They then stopped targeting Griffin. With c-Kashhrek they could hit my middle 3 all day.

Here’s to new toys though!

I drew Griffin earlier this month

He’s awesome. My 75 +20 Griffin replaced my Joon after I stripped his emblems

My Joon has also been relegated to war duty mostly because my yellows are stacked. The problem is that I can’t take time to LB many of them because I have so many in the queue. (First world problems; I know.) I’ve got flippin’ Rhys waiting in the wings, for crying out loud, because I need to get D’Andre and Griffin up to snuff first. But the commonly available four-star yellows are quite awful, so I think these two are definitely worth it.

You think he’s worth emblems? After I finish Merlin, C. Kasshrek will be on my short list, just because you can never have too many healers.

Domitia was the last boss standing and I tried to have Wren nut her to death.

This is a family forum, @Muchacho ! Keep it PG!

Here’s to new toys though!

+1 for going deep into the bench just to see what you’ve got! Glad it was fun for you.

You think he’s worth emblems?

It’s different for each roster. He was definitely the best wizard dump I had though. Trying to prep for elemental quests.

But the commonly available four-star yellows are quite awful

This is a family forum, @Muchacho ! Keep it PG!

Have you seen the animation. The boss turns into a nut and then the nut cracks and the squirrel runs away? Wren nuts bosses for damage, or his squirrels do. Either way, the enemies being nutted appears to be the damaging part of the special.

Glad it was fun for you.

I’m glad it was fun for me too!

Trying to prep for elemental quests.

That’s what I’m thinking as well.

Have you seen the animation.

Yes. Are you familiar with my reputation as a hopeless smart aleck?

Francine out jackal in no items 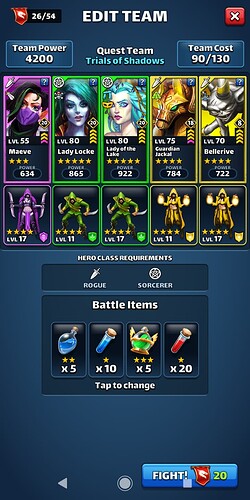 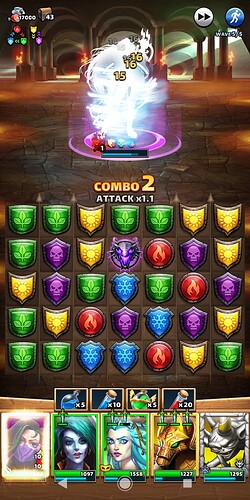 I decided to switch out my 3x red for 3x yellow for a change.
Usually:
Marjana / Carol / Brynhild / Lady of the Lake / Vanda

No items used and no deaths.

Compared to last time, Norns gained her final talent. Also, I have been failing to note that Francine is LB, but she has been for a while.

Mobs were very straightforward, and on-color tiles were in good supply. In wave 4, I managed to preserve a green diamond with a huge number of green tiles on the board. Entered the boss wave with all specials charged. Norns really makes this boss fight stupid easy with her debuff. I open with a blue match-3 under Skittles, which is now strong against her instead of weak, and she dies instantly. Then, I make a green match under Scarlett to recharge Francine, but since those tiles are strong instead of weak against Scarlett, she also dies. From there, it was just a few tile matches to take down Domitia before she fired. The only hiccup in this fight was when I went to end it with Thorne’s appropriately named “Frozen Finale”, but Domitia evaded it. She paid for her crimes on the next turn. 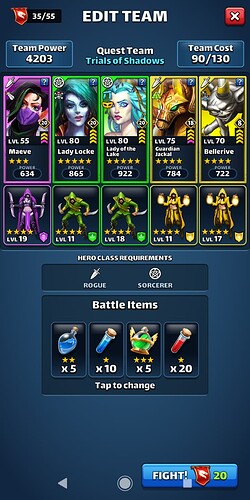 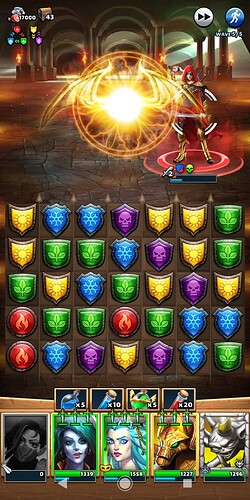 I would put a screen, but I forgot to turn of “auto” and it won by itself

I used a team that was impossible to lose. Zagrog, Diaochan, Kullervo, C Ariel and C Francine
Almost auto play

forgot to post last week. Para was fun for this, but i was in a hurry and used this team i think i may have used before, the Cool Dudes and Red Hot Ladies team: 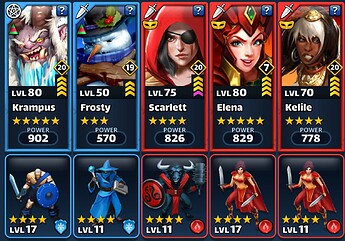 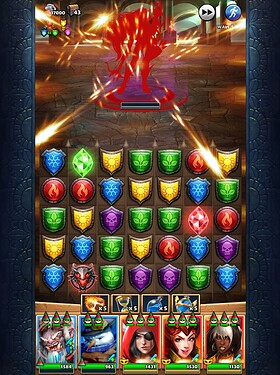 easy breezy. Sorcerers to March, Rogues saved but probably Aqee;a or Domitia. Forgot already who got the trainer.

Same team no items … Troops up a bit … 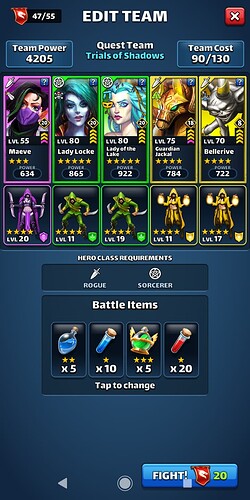 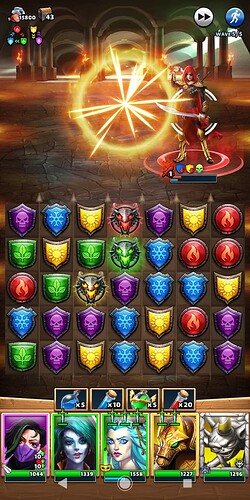 Since I just finished Griffin last night, I thought I’d let him stretch his legs a bit in place of Francine.

No problem with mobs, and I built a nice minion wall before entering the boss wave. Fired all specials, with snipers going after Skittles, since she can’t evade. A bit of tile damage later, and she was gone. For some reason, it seemed like Scarlett was a bit more resilient than usual against blue tiles, and both remaining bosses took a bit to dispatch. Domitia fired a couple of times, I know, but thanks to the minions, it barely affected anyone’s health. Not really difficult, but Griffin didn’t really add that much. Will probably go back to Francine next time and keep Griffin for four-star content, which is really what I leveled him for anyway, since most four-star yellows are terrible.

Sorcerer emblems get a node for C. Cat. Rogue emblems saved to get Domitia’s last node for her superior talent. Trainer hero to CC Kiril.

Still catching up. Pretty sure i had just finished c2Magni and wants to try him out when this rolled around so this seemed like a good team: 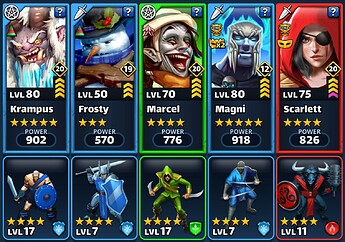 two different kinds of defense down, and everybody fast (enough). really should have put a magic troop on Frosty so he charges in 9 tiles, have to remember that for next time. 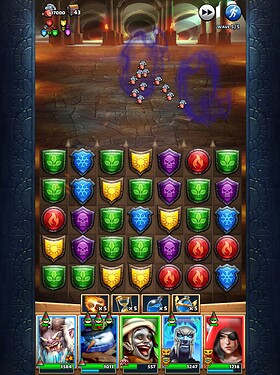 I accidentally blew up the mobs a little too fast and went in without everyone charged. but it was over in a flash when i did. Marcel → c2Magni → Scarlett and i blew them all up. i like c2Magni. he needs to be paired with a big hitter or a couple of other complementary specials as here, but the second costume is quite useful.

Rogues saved for Domitia. Sorcerers to C. Cat or Carol. forgot who got the trainer, was it purple? probably Ana-Belle then.