No deaths. No items were used.
Kind of slow at the end, and Joon kept targeting Zenobia which was annoying, it made the bosses die slower because she missed a lot. But other than that very easy

Same team as last time. Raff is up 3 talents.

Maybe I should pair Leo and Elk and drop a healer.

Because of the circumstances of the past week, I forgot about this advice to myself. Maybe next time.

No, not next time either. But it would have been bad advice anyway, since my folks took more damage this time, and having Raff on board was a good thing.

Mobs are never an issue, other than taking some time. Entered the boss wave with all specials charged and the board lined up pretty well under Boril, so I went after him, but man he still takes a ton of damage to dispatch. In the meantime, Joon developed a vendetta against Wilbur, and thanks to two consecutive blasts, I lost a hero on this trial for the first time. Losing my def down made the mobs take even longer, and that made me glad I had two healers on board. Finally slugged through the thing, but this is my least favorite trial, and it isn’t close.

Saving monk emblems to get Leo to +20 for superior talents. Cleric emblems saved for Rhys. Trainer hero to Griffin.

how many of these did i miss? lol

i think i was in a hurry and used the same team as last time, so i’ll spare you the details: 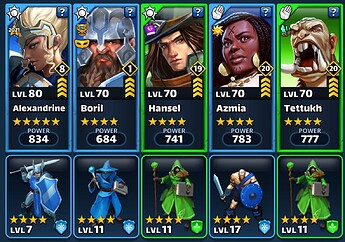 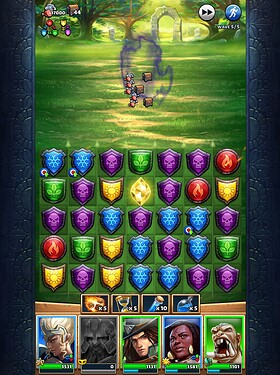 Boril died to a Joon-blast, which also killed him too.

otherwise everything went pretty smoothly, less resistance to Hansel and Tettukh this time. Clerics to Alexandrine or Ana-Belle, Monks saved.