KH out finley in no items … 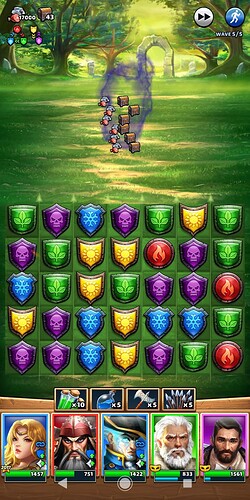 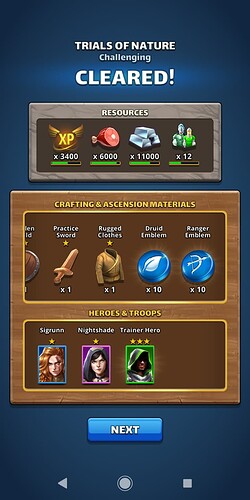 Emblems in storage trainer to melina 2

Sorry, but in my language this word have… very bad meaning

My Noor carries me far

She helped me a lot in this one.

I used the same as last time:

No items were used and no deaths. Horghall went off once but no one else, I had cRigard ready to remove the -attack Horghall gave me.

I used the same rainbow team I had used the last couple of times. It works well. I do have some lower tier rangers and druids I would love to tinker with in these, but today my gut was saying “next time, let’s pound out some S4!”

Overheal, D drop, some snipers. Kind of self explanatory. Chao went down in under 5 turns. Brienne went off and Horghall was almost ready. I dumped some tiles into Horghall to boost his attack and charge his mana. He then riposted to death on Ferent. I was overhealed so everyone was fine. Then picked off Brienne.

Druid emblems allowed me to start Zimkitha, so she is +1.

Ranger emblems after stage two got Seshat to +12

Trainer got Lianna to 83.

Catching up from the weekend. Changed it up because I wanted to see how the dynamic duo, cMagni + Lepus, fared in this trial (they did great in the other druid trial): 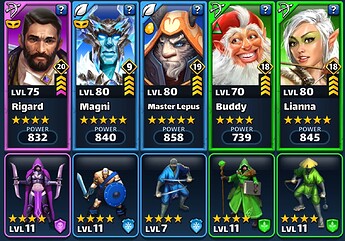 cMagni up to +9 just now. getting very short on fighter emblems. too many fighters, Lepus up to +19 because i put him on my equalizer war defense. Buddy and Lianna up to +18 now, Buddy for a tournament and Lianna because i use her all the time. 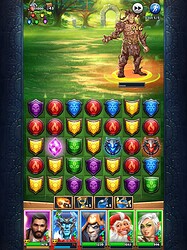 sometimes the AI picks on one hero, and it’s just mean. look at poor cMagni there. he took all the abuse from multiple Chao hits and slash attacks. he barely made it, i really didn’t think he was going to. Anyway, the real threat here of course is Brienne, so this was pretty straightforward, blast everyone with specials, saving Buddy for the attack down in case Brienne goes off, rinse and repeat. Knocked Brienne out with two rounds with Magni + Lepus + Lianna, but she did go off first so glad i saved Buddy’s special because she and Horghall always seem to get charged close together, and that one-two punch can end your trial real quick.

Same team as last time. Will I ever have a druid worthy of breaking into this all-ranger lineup? I doubt it.

No trouble with the mob waves. Didn’t even fire a healer once. Entered the boss wave with all specials charged. Focused on Horghall, per usual. Cascades ensured that Chao got a chance to fire. So did Brienne, but by that time, the fight was basically over anyway, so it didn’t matter.

Easy enough usually but today the boards dried up very badly on the boss and I almost lost a few heroes. I needed green and purple tiles, it was giving me everything but those!

I had to use 10 minor mana and a couple of minor antidotes, but otherwise easy enough. 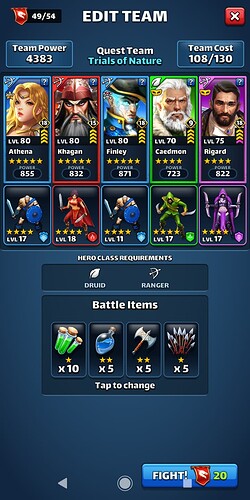 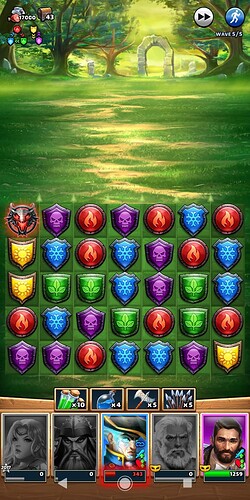 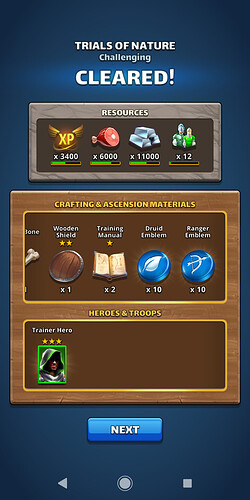 Not a whole lot of change to my druids and rangers recently, so I tried a variation on an old team i used before: 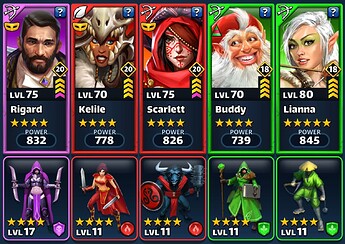 Lianna instead of Kadilen, the red costume ladies for red tile power and stackable DoT. 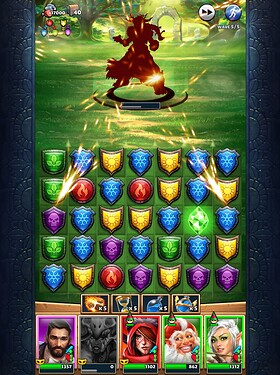 I had a really good board going into this, and everyone charged except i used cScarlett to take care of the last monster before entering the boss stage. but i had a purple diamond on the board and could make a red diamond. i thought this would be cake. in the end, no items used, but i did lose cKelile. Buddy’s debuff wore off right after i dropped a bunch of red tiles into Horghall and he went off and took out cKelile, thank goodness he didn’t have Brienne’s buff or i might not have gotten through this.

I do find even at 20 emblems though that cKelile’s defense feels a bit low. cScarlett survived no problem, but it may have been a matter of being hit by slash attacks beforehand, i wasn’t paying super close attention. Anyway, Kadilen instead of Lianna would have definitely helped for survival purposes, even if it would have taken a little longer.

Druids saved and trainer for Mielikki, almost done, she’ll get to come next time for this. Rangers to Poppy.

Same team as always BUT probably for the last time. By next round, I should have C. Magni ready, and he would be an upgrade over Tiburtus for def down. Finally, a druid will break into my band of merry rangers.

No issues, per usual. Entered the boss wave with all specials charged, and unloaded on Groot. That allowed Chao to fire once, but who cares? His hit sucks anyway, and I felled him and Brienne before he could fire again.

Mercifully, Tahir did finally show, so I continue to stock ranger emblems for him. Druid emblems to Mielikki, who I just maxed. Trainer hero to Noril.

Easy as always.
I didn’t use any items, and I had no deaths.
Last time I used Gullinbursti for the health boost, but today I decided I don’t need it so swapped him for Khepri (only +6 for now but I am working on him with all emblems I get for ranger).

I had a nice board at the end, everyone almost died (the bosses), but then Horghall went off, but I had cRigard ready and removed his -Attack, then my next move killed all 3. It was actually a really fast game for me today

I have a couple of teams that make this a snap, so I thought I’d give Mielikki a go here, trying to get her up to +20. This seemed like a good mix: 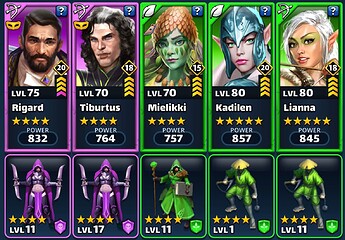 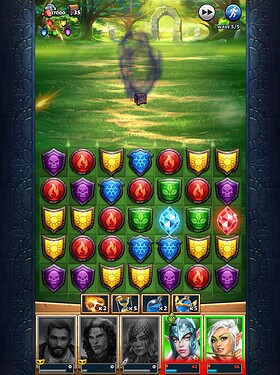 boy oh boy did this not go well. and it had nothing to do with Mielikki, and everything to do with an absolutely awful board that just gave me zero green or purple tiles for the very longest time. it didn’t help that Chao hit Rigard twice in a row, and i probably made the decision to start using items a couple of turns too late. Brienne and Horghall went off - together! - 4 times. why do they always seem to charge at the same time?

can’t believe i made it, but between Kadilen’s SS def up and Mielikki’s wall of minions, and several bombs and a couple of mana potions to Lianna, i just scraped through.

Druids for Mielikki, trying to get her to +20 for the mana node, probably will use her quite a bit when that happens. Rangers saved but probably to Poppy. Trainer to Marcel.

Same team … Troops up a bit … No items 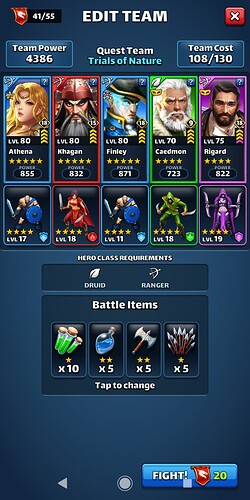 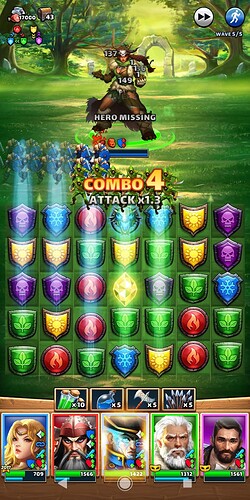 As predicted, C. Magni replaces Tiburtus for this trial, and as predicted, that went pretty well.

Mobs weren’t much of an issue. Entered the boss wave with all specials charged. The opening salvo of specials put me in an enviable position, but the constant formation of diamonds made this easier than it should have been. I think Chao fired once. Didn’t matter. Quick battle.

Same team no items, was looking bad was half asleep playing it though 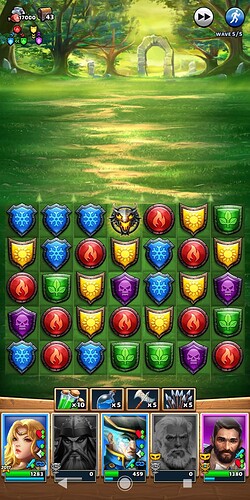 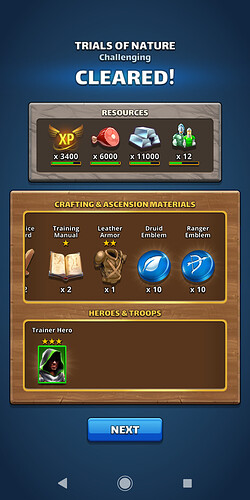 For the second straight iteration of this trial, I get to throw a new hero into the mix. This time, Tahir replaces Seshat 4^85+19, for the color advantage and the fact that he adds bleed damage to his massive snipe. Early returns have indicated this HotM was worth the chase.

This trial is always pretty easy, but holy goodness, the boards were in my favor to the point that it was almost boring. Entered the boss wave with all specials charged. I think Chao fired once, but it was over really quickly.

No good options for druid emblems. Suppose I will save them for Kadilen’s last node to get her superior talent, even though I almost never use her. Ranger emblems saved for Tahir’s last node. Trainer hero to Silvaria.

I’m pretty sure as with another trial recently, i put this team together because superior talents: 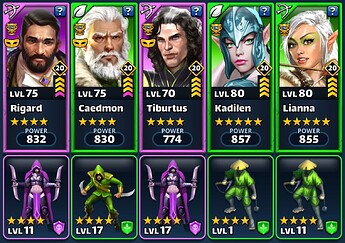 this might be one of the first trial teams i’ve had where everyone was +20! 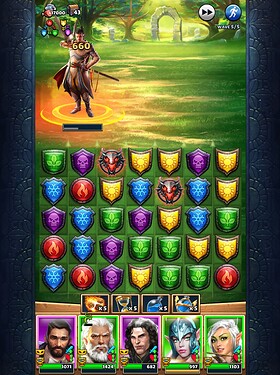 Chao was picking on Tibs, but he was never really in danger. this was pretty quick and easy.

Druids probably to Zhabog. Rangers saved, no important rangers waiting for emblems right now really. trainer was green? if so, probably to Ptolemy